The goal of the project is to create a table that can be used at traveling conventions that showcase the unique abilities of the encoders the EPC offers. 25SP/58TP, A58HE/A58SE, 15T/H/S or TR1/2/3, and 30M. The user will be able to interact with each module via HMI and PLC in order to fully showcase the functionality of each encoder.

An encoder is a sensing device that provides feedback. Encoders convert motion to an electrical signal that can be read by some type of control device in a motion control system, such as a counter or PLC. The encoder sends a feedback signal that can be used to determine position, count, speed, or direction. A control device can use this information to send a command for a particular function. This project focuses on three different types of encoders: programmable, absolute, the Model 15 encoder, and Model 30M.

58TP and how its resolution can be changed

The programmable encoder allows the user to change the resolution by coding in the desired resolution anywhere from 1 tick per revolution to 65,536 ticks per revolution. The absolute encoder will always remember its position in space. Even if it gets unplugged it will move 1 tick and know its location.. The Model 15 is EPC's most popular encoder because it is cheap, reliable, and easy to mount. Finally the Model 30M uses a sin wave instead of a traditional square wave, which results in a more precise encoder.

Overall, our deliverables consist of only a few things:

The final project should have these considerations in mind.

Our first project that we had was to highlight the programability of EPC's Model 58TP by creating a game where the user would change the resolution of the 58TP and use that to move a linear actuator and try to get within a specified distance (within a small margin of error). How this is set up is we have a linear actuator that has a platform that is connected to a motor and the encoder. On the side of the platform is the Model TR2, which is a linear encoder that is used to measure distance. This will be used as a feedback system so the user will know exactly how far they have moved the linear actuator. The motor is attached to our HMI+PLC, which is the user interface that allows the user to guess how many revolutions they will need in order to move the platform to the desired distance. By changing the resolution of the encoder, the user can see how precise the 58TP can get. 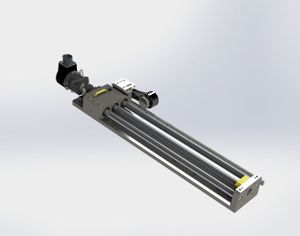 The first thing that users will see on the HMI is two options to choose from "Engineer" and "Citizen" mode. Both modes change how the user will experience the product. Citizen mode is designed for casual people who do not specialize in engineering or just want an easier time at the linear actuator. This mode will have very forgiving margins for error as well as recommendations for what to program the encoder. This makes it more enjoyable for a regular person seeing the product for the first time to understand what it is all about while enjoying themselves at the same time. Engineer mode will be more challenging than citizen mode. In this mode the user will not have any recommendations for programming the encoder, and the margins for success will be much smaller. This mode is designed for people in industry who understand encoders and who want a challenge. Both modes will be given the conversion for distance per revolution. 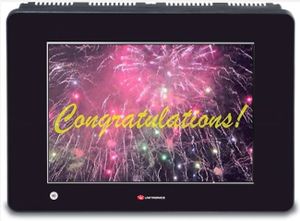 If the user goes an incorrect distance then the HMI will give off a negative sound such as a buzzer going off and say "incorrect, you were ____ distance off. Try again!" Once it displays this, the linear actuator will reset back to a zeroed position.

If the user inputs a distance that is much further than the distance the linear actuator can go to, the moving platform will hit a stop switch at the end of the track. Once the track hits this switch, it will stop and reset back to the zeroed position and give the "try again" message. This is implemented in order to prevent the linear actuator from breaking either itself of the stepper motor.

There have been some slight modifications to the physical linear actuator in order to make it look more professional and to give it an identity for EPC. As shown in the figure below, we added a plate on top of the actuator with a laser engraved logo of EPC. We also mounted the TR2 below the plate in order for it to look more seamless and professional. 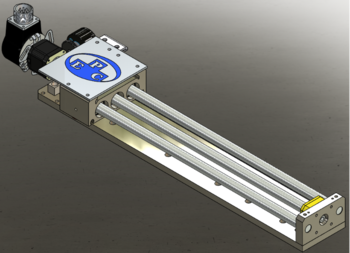 As shown in the photo below, the HMI/PLC has been added and to that as well there is an 80-20 Aluminum mount attached to the PLC. This mount is used to keep the PLC standing upright as a display. 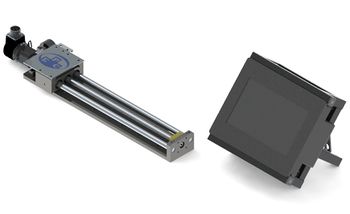 A lot of the project learning has come from the electrical engineering and computer science side. We first had to learn how the encoders worked and programming the Unitronics GUI (Graphical User Interface) language to work with both the encoder and the motors that are all attached to the GUI. Also learning how to work with a client has presented its own sets of challenges; as more people are becoming involved in our project, more ideas are being presented and it has been a challenge to pick apart what is possible for us to do and which is out of our realm of possibility.

We have also learned more about how to do 3D modeling in programs such as Solidworks, which we have used to make renders, animations, and 3D models of our project which we can use to effectively communicate our design plans. Also we have learned how to use a design shop, which has been useful for us for when we have needed to make modifications to the linear actuator that were not possible by simply ordering a new part. We had to custom design parts and attach them to the linear actuator. for example, the plate that is attached to the moving platform, the rail, and the TR2 mount were all put on by utilizing the shop. 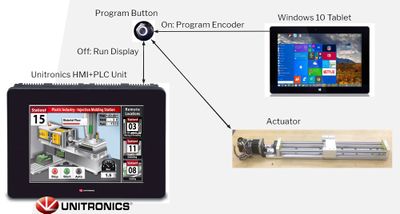 The picture on the right shows the flow of logic that will be going through the Unitronics GUI, the linear actuator, and a Windows tablet/computer. As shown, everything is going through a program button that can be switched to either on or off. When the button is on, the Windows tablet will be able to set the resolution of the programmable encoder. When the switch is off, then the Unitronics unit is on and that is where the user can set how many revolutions they want to go and where they will enter their values. All this is going to be fed into the encoder and motor attached to the linear actuator. Finally, the TR2 attached to the linear actuator will give a feedback of how far the user actually went back to the Unitronics unit.


These are the block and logic diagrams. As shown in the block diagram, the User programs the encoder by way of a PC, for this project, the PC will instead be a tablet that can run Windows 10. From there he can then command the motors through the PLC, which in turn run the servo motor that moves the linear actuator. Once success is achieved, then the candy dispenser will rotate from the stepper motor.

Due to the COVID-19 pandemic, there were parts of this project that were unable to be finished due to the inability to access a workshop. However our final prototype was fully functioning. As shown there are two screens, the HMI/PLC and the Windows tablet. The windows tablet is used to program the 58TP programmable encoder to the desired resolution. The HMI/PLC is used to program the motor to go the desired distance. Once the linear actuator reaches the programmed distance, it will pause and confirm that it has achieved success through the TR2 linear encoder. 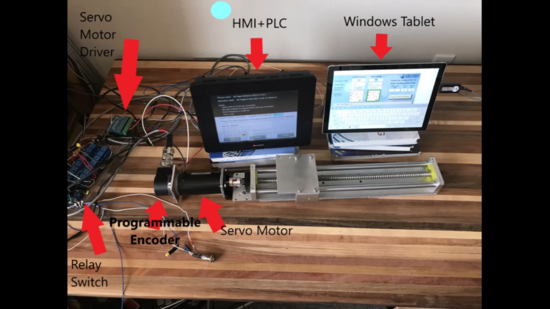 This project has been validated by a series of smaller tests that the group put together in order to achieve the larger goal of having the entire project to work. By achieving success at one smaller easier task, it made it much easier to complete the larger task at hand. 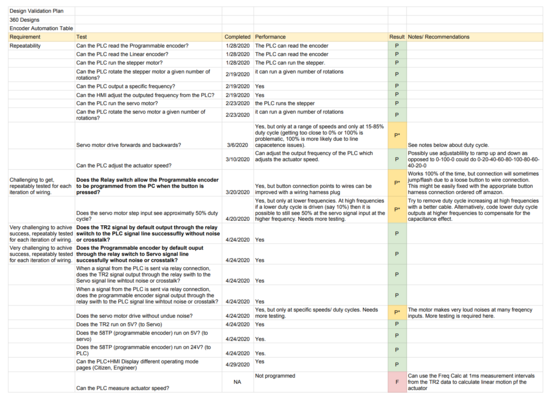 Some important tests that were conducted was programming the relay switch to allow the 58TP to be programmed when pressed, then switch to the PC when pressed again. Once this was validated it allowed us to seamlessly transition between programming the encoder and programming the stepper motor. One of the most challenging obstacles to deal with was dealing with "crosstalk." Crosstalk is when one circuit or channel of a transmission system creates an undesired effect in another circuit or channel. This proved difficult because the signal going from the PLC to the TR2 was being interfered with by the stepper motor causing it to not work properly. Mark was able to figure out a solution to this problem and now the TR2 can successfully be programmed and then the signal can be switched to the stepper motor to provide input for the desired distance.