The goal of this project is to construct a four-stage, rumen-derived anaerobic digester for research in optimizing parameters for biogas production from algae.

Microalgae are an increasingly attractive replacement for current fossil fuel use due to its high growth rate and ability to grow in conditions that do not compete with terrestrial crops. Anaerobic digestion consists of four stages and results in products of carbon dioxide and methane, or biogas. Each of these steps completes an important task and results in specific byproducts, as shown below.

In ruminants, the esophagus transports feedstocks to the reticulo-rumen, which acts as a fermentation chamber that employs anaerobic digestion to breakdown feedstock. In this chamber, the plant matter is digested into VFAs, acetic acid, lactate, carbon dioxide, methane, and hydrogen. The bacteria in this chamber survive under anaerobic conditions. Additionally, these bacteria hydrolyze the cell walls of the plant matter better than bacteria found in other stomach types. Because of this, we hope to use rumen microbes to help increase the rate and production of our system. Anaerobic digestion of microalgae could reduce the need for the drying stage associated with other bioenergy methods. Production of biogas from anaerobic digestion remains unfeasible for large scale production due to production below theoretical yields. Currently, most lab-scale anaerobic digesters used in research use a two-phase approach. Using ruminant bacteria and a four-stage approach, we hope to help solve this problem.

Anaerobic digestion is the breakdown of materials in the absence of oxygen. As previously mentioned, there are four steps, hydrolysis, acidogenesis, acetogenesis, and methanogenesis. Each process is carried out by different microbes that prefer to live in different conditions. The one- and two-phase digesters that are often used in industry lump together stages without optimizing for parameters and pH. From a literature review, we chose the following parameters as our optimal starting values. Based on the source used, these parameters vary, so it is important to test this system with different values to confirm optimization. The residence time for individual chambers will also need to be confirmed with further testing. 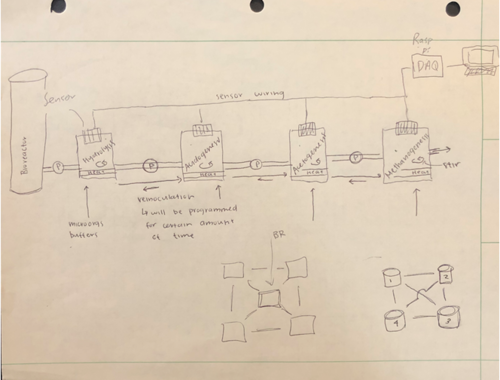 This is the first sketch that we made of our system. The large picture shows the process diagram for anaerobic digestion and our plans to include mixing, pumping, and heating mechanisms. The left bottom diagram shows a thought to position the chambers around the photobioreactor constructed by a previous capstone team. This design was scrapped early in the first semester since another capstone team was also required to retrofit to the bioreactor. The bottom right sketch shows the chambers arranged with one in each corner, which is the design we ended up pursuing.

Mixing is an important feature in anaerobic digestion. It ensures adequate heat distribution throughout the chambers and prevents particles from settling to the bottom. We considered using both an impeller mixer driven by a stepper motor and a magnetic stir plate for our system. The impeller mixer would allow us to cover the entirety of the surface area of the chamber, eliminating dead spots in the mixing. However, it was difficult to find a seal that would prevent air entering or water exiting the system. We were originally concerned that the magnetic stir plate would not have enough force through the PVC cap to provide suitable mixing, however after testing, we confirmed that the magnetic stir plates would work for our purposes.

At the beginning of the semester, we considered using a band heater to heat our system. However, due to the heat rating of PVC chambers, this had a high probability of melting our chambers. Additionally, it would be more difficult for heat to transfer through the PVC to the system. We decided to use an immersion heater to heat our system so that our liquid would be directly impacted. The heater that we chose is 500 watts which has the potential to kill microbes and microalgae if heated too quickly. We will have to control this by programming the heater to warm slowly to lower levels.

Six out of the eight sensors required for this project, carbon dioxide, oxygen, methane, water level, temperature, and pressure, need to sit at the top of the chamber due either to the length of the sensor or the need to read data from surrounding gases. We had planned to 3D print a cover that would screw onto the top of the lid of our chambers. However, after our Engineering Release presentation, decided to laser cut an acrylic disk which sits on top of the MIPT adapter. This disk has holes that fit the dimensions of the sensors, allowing them to sit on top.

Two of the designs for 3D printed caps

Four Chamber Anaerobic Digester
Each chamber houses one stage of anaerobic digestion. We envisioned that users would be able to set a target pH for each chamber and once that pH was reached, a peristaltic pump would begin to move liquid to the next chamber. Additionally, the user could set a residence time per chamber that would indicate at what time the pumps would begin to move liquid. 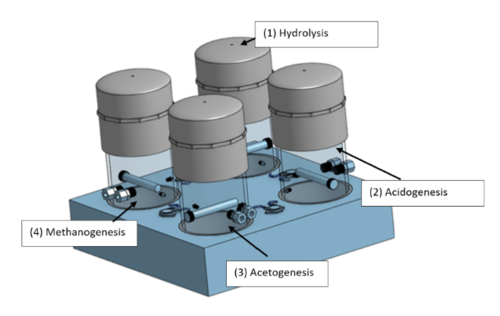 One Chamber Design
Each chamber is 6” in diameter and 12” in height with 8 sensors. The sensors in each chamber are carbon dioxide, methane, oxygen, water level, temperature, pressure, pH, and electrical conductivity. To seal the chambers, the bottom, socket cap and the MIPT adapter are glued onto the clear PVC chamber. The top cap is removable and will have its threads wrapped in silicon tape to seal from oxygen entry. The holes for the hose barb adapters, immersion heater, and probe pipe fittings were drilled and threaded by University of Idaho Facilities. The threads for these parts will also be wrapped in silicon tape to prevent oxygen entry and water leakage. 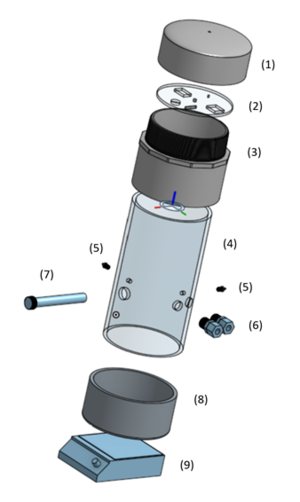 One Chamber Assembly
We were able to assemble one chamber to see how it would look and to adjust any parts of the design if necessary. 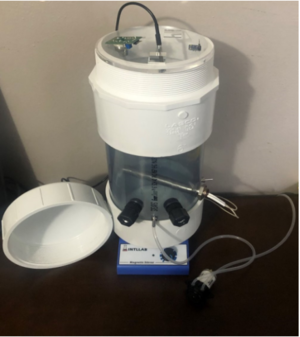 Acrylic Disk
The sensors that sit on the acrylic disk were measured so that holes could be laser cut for them. This disk should help to prevent oxygen entry into the system and keeps the sensors away from the liquid which could damage them. 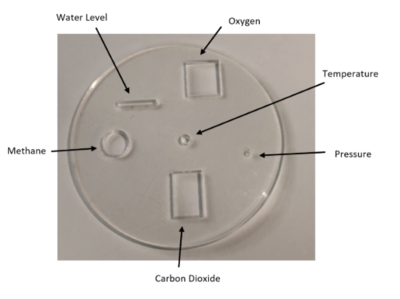 Circuit Schematic
We have designed a schematic that accommodates parts for both the Raspberry Pi and Arduino. The left portion is for the Raspberry Pi while the right is for the Arduino.
For the Raspberry Pi, we are using an H-bridge driver to control the pumps. An 8-channel relay is used to connect the mixing and heating elements to a wall outlet to power them.
The Arduino uses a multiplexer and Analog/Digital Converter to consolidate our sensors' output to one pin to connect to the I2C pin of the board. This is necessary to save on pin usage on the board. I2C is the primary method of data communication from the sensors to the board. The board is connected via USB to the Raspberry Pi which transfers data serially. 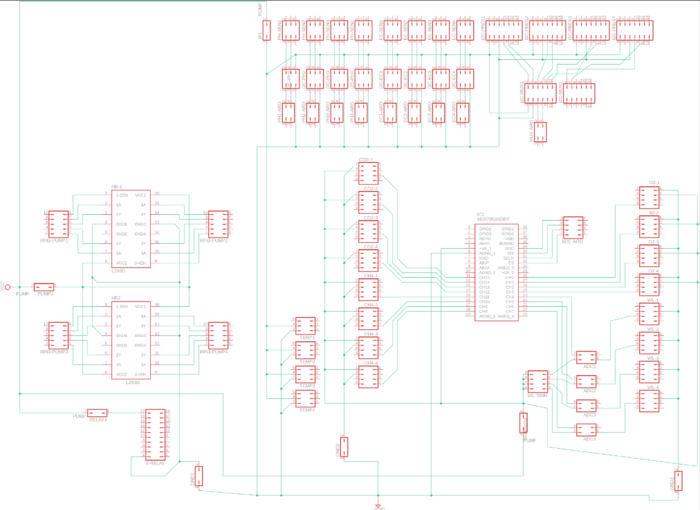 Due to the CoVID-19 pandemic, we were unable to validate our design. The plans for validation are shown below.

We were excited to run tests on our system using microalgae and rumen microbes to attempt to produce biogas but were unfortunately unable to. Future capstone teams could resume our work by ordering parts and finishing the construction of the last three chambers. Additionally, they can construct a wooden box that would house the chambers and electronic components as well as retrofit the system to the photobioreactor. The software is a big portion that will need to be done from the ground up. Due to not having the necessary parts on hand, we were not able to write the code and test it effectively. Most importantly, the team could begin to test the system for optimal parameters and move forward with biogas production.

Here are the PDF files of various documentations available for viewing.