The goal of the project is to aseptically collect microbial samples from the jet stream using a simple and efficient sampling device.

Little research or information is known about the microbial life in the jet stream. For the purpose of the project, a sampling system will be developed in order to collect microbial samples while being contaminant free for further analysis.

Studies speculate that microorganisms, some being pathogenic, can travel through the jet stream. In order to learn more about the atmospheric microorganism content, a method of sampling must be developed.

Once completed the sampling system will aseptically collect microbial life for classification of the microbiological taxa of the stratosphere. As well as providing records and data of temperature, humidity, and pressures at different altitudes.

This sampling system is intended to collect microorganisms from the jet stream. The system design must keep sample collectors sterile before the launch and must prevent any contamination after the flight. Control systems of the device will be programmed to read the temperature, humidity, and pressure of the surrounding environment through sensors as the system ascends higher into the stratosphere. The determined launch platform is a high altitude balloon along with a parachute system for the descent. Samples collected from successful launches will be PCR replicated and DNA sequenced for exact microbial classification.

To the left is the initial drawing of the sampling system design. The geometry of the device resembles that of a bullet, but the shape itself aids in the collection of microbial samples. The inside upper portion of the impactor is funnel shaped in hopes of guiding airflow towards the collection media and increasing optimal microbial sampling. Small openings all along the device will act as vents to allow air flow and circulation.

Figure 2 on the right labels measurements for the sampling system. The system as a whole will be fair sized for all components included. These are not the final measurements, but they will be close. 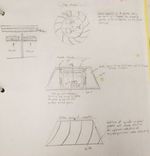 System Design 1 (immediate left): In this design, the structure resembles closely to that of a step drill bit with the tip cut off. The spiral design was intended to cause the system to rotate while it ascended allowing the collection media to rotate in unison, promoting as much bacteria collection as possible. We decided this design was unnecessarily complicated and relying on stable rotation in the jet stream is unrealistic 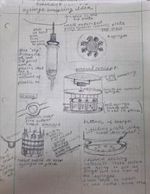 System Design 2 (immediate right): This design used medical grade syringes as the collection media because they are some of the only products you can purchase that have zero microbial presence. Dead organisms can still be DNA sequenced and that is why we wanted to explore other options that did not use an autoclave. We scrapped this design after two weeks because we realized microbial density is far too low in the stratosphere for a syringe to collect almost any bacteria.

To properly carry the function of collecting microbial samples, the electrical engineers of the team, Tian and Alex, did research on the control systems necessary to incorporate into the device. The intended control systems will be programmed through an Arduino board. Sensors such as the Honeywell, Ultra-Low temperature data logger, and the Adafruit will record temperature, humidity, and pressure of the surrounding environment at the given altitude.

Prior to having begun the sampling system project, Team Highsky attended a different systems launch that was overseen by Dr.Joseph Law. At the launch we learned that apart from the actual device, the tracking systems are a very huge priority. After having done researching, we decided on pursuing the APRS system and the Spot GEN3. The APRS system will track our device at the higher altitudes and the Spot GEN3 will track our device at ground level.

This process was the easier one compared to the control systems. To avoid any learning curves, we utilized the tools we had to draw the sampling system and then transferred it to Solidworks in order to utilize its various analysis tests.

Our final design ultimately refers back to system design 3 which was our preliminary design. The significant changes seen would have to begin with the orientation of the system. In Figures 3,4, and 5 it is noticeable that our system is upside down compared to our preliminary design. By having switched this, we avoided any possible contamination that could’ve accumulated on the balloon and parachute would’ve gone into our plates. Another difference is size. Although it’s not visible in the images, our final design is 3/4 the size of our preliminary. The reduction in size not only got rid of weight, but it also got rid of unnecessary space within our device. As seen in figure 4, there is some extra space available, but not enough to have a great impact on the weight or room for the components. In the end, the final design structure was strong and light in weight. The assembled frames in Figure 5, were strong and durable enough to be used repeatedly. After our launch, we noticed no damage and proved efficient. Our final total design weight was 5.5 pounds. 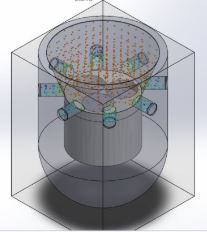 Since having begun the project, only one test has been ran with the project design. The 3-D model of the proposed design drawn on AutoCad was transferred to Solidworks in order to run an airflow analysis. The test performed was successful in tracking and recording airflow throughout the system. Further tests will performed later to analyze the use of different materials for the system.