The goal of the project is to design a mobile BioChar (BC) injection system that will accept and inject BC into pressurized water lines in an accurate, controlled, and recorded manner in tandem with existing systems on the UIdaho Clean Water Machine with minimal adaptation of current systems. 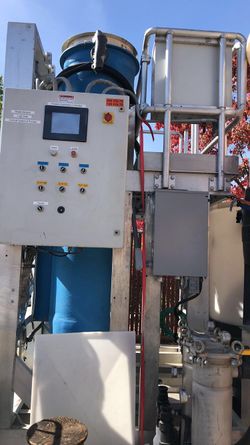 Extensive algal bloom induced eutrophication and phosphorous resource limitations are current problems faced by communities globally, primarily regarding agricultural fertilization and waste products. The University of Idaho capstone teams in the past have partnered with Nexom and other entities to create the Clean Water Machine, an upward-circulating sand filtration system, to address nutrient pollution and purify the wastewater. Current research is being conducted into the addition of biochar, biomass charcoal created by burning wood products and other organic material, into the system to absorb pollutants, especially phosphorous, from the wastewater. The BC can then be recovered and recycled as a fertilizer to amend soil quality. Currently, the Clean Water Machine operator must manually dose the BC, which results in an inconvenient and inconsistent process. Our goal as a team is to create a system that integrates cohesively with the current Clean Water Machine and automates the biochar dosing process into the influent wastewater flow to eliminate that step for the operator. Upon completion of this objective, the Clean Water Machine will have a convenient and controlled BC dosing mechanism, so that further research into water security solutions may be conducted efficiently and effectively. 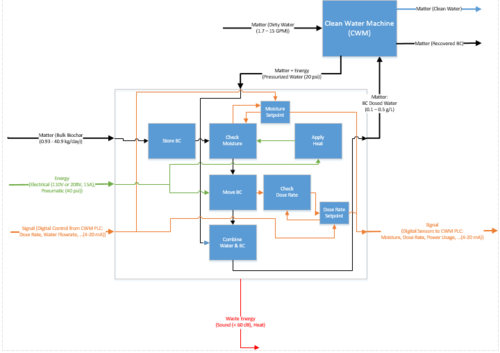 Currently, the BC is dosed into the Clean Water Machine in batches. This requires an operator to manually pour and stir the BC. This is inefficient and does not produce consistent dosing. The flow diagram to the right was provided by our client to describe how the BC can be monitored, dosed systematically, and integrated into the current Clean Water Machine design. 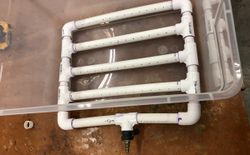 One option explored for maintaining BC consistency was a fluidized bed for drying and mixing. A fluidized bed can produce a liquid effect in granular materials such as sand by distributing air flow from the base of its container. The team constructed a drying mechanism similar to a fluidized bed to test with sand and BC as a proof of concept for this method. PVC piping with 2 mm holes drilled at 45 degree angles 1 inch apart were sealed and connected to an air compressor. Ideally, the air would be heated, and therefore heat the BC while also keeping the powder in motion. However, during the tests with sand, the air flow was not enough to produce the floating effect. The test with BC was even less successful. The design only produced preferential flow in the powder, meaning the air was not distributed throughout the bulk. This was concluded to not be an effective design to reliably treat the BC evenly. 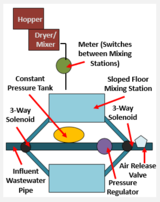 Our clients identified the pumping mechanism as a significant challenge in moving biochar in the past. Because it is a granular material which does not dissolve in water, it often clogged pumps and the small particles cause pump parts to wear quickly or malfunction. As an original solution to this problem, the team considered a design similar to traditional wastewater treatment facilities powder dosing mechanisms. The team toured the the Water Reclamation and Reuse Facility in Moscow, ID, to see how this treatment process dosed powder polymer. This facility used a large auger and large positive displacement pumps, which could potentially be scaled down for our project. Progressive cavity positive displacement pumps are effective with viscous fluids, can produce a constant flow, and has few moving parts that the BC could damage. However, after conducting research into the possibility of scaling down these components, we determined the pump would be too expensive, greater than our $2500 budget, and no auger could be identified that would provide 15% accuracy at this low dose rate.

The final version of the team's original suggested prototype is shown on the right. Two parallel sloped floor containers receive BC from the metering system and intermittently dose into the influent pipes to creates a more continuous dosing. This system is also directly in line with the influent water. The BC is dropped into the chamber when both three-way valves are closed. One three-way valve switches the incoming water between the two chambers, and the other three-way valve alternates which chamber is emptied back in line with the pipes. A constant pressure tank and pressure regulator is supplied so that the influent pipe pressure is not altered. However, it was later determined that the flow taken from the influent lines would cause too great a pressure drop from the main line. 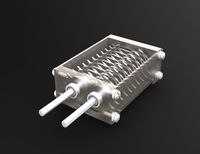 As a solution for the BC inconsistencies in texture and particle size, a grinding system was added to the design below the hopper. Two stainless steel rollers with an adjustable distance between them are attached to a motor at a variable RPM. However during testing, as depicted in the image to the left, larger pieces of BC were not pulled through the grinders. This began clogging the hopper and preventing flow. To solve this problem, a dual milling process was implemented. A similar two-roller system is positioned above the original rollers; larger teeth pulls the BC through and breaks it into smaller pieces, which is subsequently ground to powder in the second step. 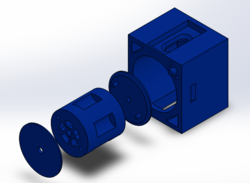 To accurately dose biochar, this system receives the water flow rate output from the CWM and uses it as an input to dictate the mass flow rate. From the fluid flow signal, we can find mass flow (g/min) = concentration (g/L) * fluid flow (L/min). From the mass flow rate, we calibrated the motor running the metering mechanism and correlated voltage with the dose rate. See the attached document entitled "Mass Flow" for calculations on the dose rate required for a concentration of 0.5 g/L with a 15% overdose at flow rates between 6-15 gal/min.

The influent water line is pressurized up to 18 psi. A venturi nozzle operates based on a change in liquid pressure when it flows through a constricted space. This provides continuous flow and can be easily adjusted to vary the output. Orignally, this was considered as a dosing mechanism, but through testing, was determined to not be accurate since biochar does not maintain a consistent concentration in a solution. It will instead be installed at the injection location in the system to overcome the back pressure from the transport between atmospheric pressure and pressurized pipes after the BC has been metered. See the attached document "Venturi Calculations" for details on how the correct product was chosen for this application.

The final built prototype includes a polyethylene hopper capable of storing 3 days worth of BC, secured to the brackets by large clamps. Below the hopper is a stainless steel box containing the dual grinding system and the metering mechanism, with funnels directing the powder flow. The controls box is attached to the side of this box, holding the motors for the grinder and meter. The door of the box has acrylic on the front, sealed with a gasket around the frame, and closes with a latch. The powder then goes through a mix tank, with a nozzle spraying water that creates a vortex at the base. From there, the slurry is pulled through a the venturi nozzle and a static mixer to keep the particles suspended before reaching the rest of the CWM. 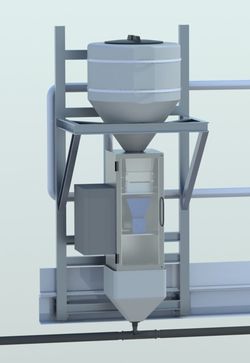 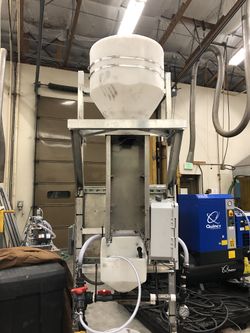