Band on the Run

The goal of this project was to work with a mechanical engineering team to create an electric vehicle platform for the University of Idaho marching band to use during half time shows.

Our Band on the Run project was previously known as the BandBeesten Project. There have been many changes throughout BandBeesten's life time. This year we were tasked with creating a whole new platform for the University of Idaho marching band members to use during performances. While the mechanical engineering team was tasked with building the platform itself, and later the cell containment, our goal was to create an electrical system that allowed the platform to be controlled by an RC controller.

The University of Idaho Marching Band, also known as The Sound of Idaho, just celebrated its 100th year in 2019 while still boasting an impressive 150 students within it. The ensemble has performed for our athletic programs and school events beautifully and with great attention to detail in every routine. In 2011, Dr. Edwin Odom of the Mechanical engineering department and Dr. Daniel Bukvich, professor of Percussion and Music Theory, started a project to design a mobile drum set to use during the band’s performances, in later years dubbed the Band-Beesten. After almost ten years and off-and-on efforts, some models were built and used with success, others not so much. In the Spring and Fall of 2020, Band on the Run has picked up where last years team left off in an attempt to build a four-wheeled omni-directional platform designed to carry an array of instruments and people.

The Band on the Run project had many design specifications that we needed to meet. First we aimed for at least a fifteen to twenty minute run time. We also needed the platform to be able to rotate and translate easily across the field while carrying approximately 800 pounds. The platform needed to be controlled remotely by an RC controller and powered by lithium based cells.

As our project progressed our design considerations evolved. However, we did have some basic considerations from the beginning. We were tasked to produce an electrical system capable of propelling a platform of substantial weight by way of remote control. This system must be operational for approximately 15 minutes, be able to rotate, translate and above all function in a safe manner. These constraints inferred some basic needs to consider:

As we considered these basic needs and chose components to fulfill those needs our considerations progressed.

When considering system control, and all subsequent topics in this section, development time and cost were also considered. This led us to focus on microcontrollers for our main computing unit for system control. As microcontroller technology has become ever more available to consumers, at low price points, we had many choices to choose from.

To ensure safe operation and to implement a control algorithm, we realized we must also consider sensors. The sensors must acquire data on velocity, acceleration, position, currents, voltages and temperatures.

The energy needed to accelerate a vehicle of significant weight can be substantial. We had to consider this in our design, along with our clients want for a modern storage solution, as opposed to a lead-acid based storage solution. Furthermore, we had to consider the storage's voltage, its ability to source current and the operation temperatures. Another consideration that came to light during the investigation into our storage solution was the management of modern energy storage, specifically, the management of lithium based energy storage technology.

Energy management considerations must change based on the technology used. Since we were constrained to lithium technology, we had to take extra care in these considerations for safety concerns. To properly manage lithium ion cells in the safest manner, we had to consider how to manage the sources voltage, current draw and sink, when charging, and temperature. With cost considerations in mind, and after some research, we found we would have to consider this source as a bank of individual cells. This realization brought new considerations. Specifically, cell balancing, for series connections, the physical connections between cells and their ability to withstand large currents.

To improve development time and complexity, we decided to focus on a sophisticated H-bridge motor controller. We had to consider its ability to control the speed, torque and acceleration. We also had to consider its current and voltage ratings as this device would have to withstand relatively large currents.

This vehicle is intended to operate within a stadium setting. This infers an electromagnetically noisy area. We had to consider this fact, and for safety concerns, consider bad actors hijacking or jamming our control signals. We had to also take into consideration the distance of transmission of the signal, as a stadium can be 100 meters or more in length.

Due to an inadequate spot welder, our design, with respect to cell pack architecture, had to change considerably near the end of the project. As procuring an advanced spot welder was cost restrictive, we employed our mechanical engineering counterparts to produce a cell containment apparatus. This apparatus would hold the cells in a compression configuration as opposed to a spot-welded pack. This design change would greatly facilitate cell replacement in the future. A prototype was designed but due to cost considerations improvements needed to be made. The prototype depicted would be for the parallel sets of cells, the series connections would be made with wire conductors mechanically connected to the containment apparatus. Unfortunately, this design was not completed by the end of the project, forcing the cell containment to be designated as future work. 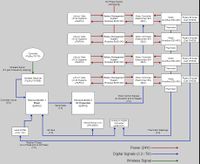 As one can see in the validation section, the platform consists of four omni-directional wheels, all facing in their own cardinal direction. Having the wheels 90 degrees off from each other allows for rotational movement during translation with the use of two separate joysticks for each type of movement. Driving each individual wheel is a 24V DC motor controlled by a full-bridge motor controller. Two ESP32 microcontrollers work together to send PWM signals to the motor controllers, while receiving its own commands from our RC controller as well as sensor information from our rotary encoders. Finally, the platform is powered by a number of LiFePO4 cells being monitored and controlled automatically by the battery management system.