It is more prevalent than ever for commercial aircraft to use tubing with tight-fitting insulation to carry hydraulic fluid, compressed air, and fuel. Designed with stable and lightweight construction for manual handling, our team has prototyped novel tooling for installing insulation onto complex aerospace tubing. Our design reduces ergonometric risk to operators, reduces processing time, and improves production capacity.

The Boeing Company’s TDRC facility in Auburn, WA assembles, tests and prepares all tubing, ducting and reservoirs for The Boeing Company's commercial aircraft. One of the project design criteria included; applying closed cell insulation to a formed titanium tube. It is common for tubes to be bent into various geometries, including the main component of focus. The current installation procedure requires an operator to manually force insulation over the bent tubing without any sort of mechanical assistance. This can create an ergonomic risk, as it is taxing on the operator who may have to complete dozens of these insulated tube assemblies a day. Likewise, it reduces the production output of the facility since no assistance is being provided to help ease the process.

It is necessary for the tubing installation to be defect-free, consistent, user-friendly and reduce current manufacturing times. The proposed method/tooling developed by BIG must be reviewed by the project sponsor. The method/tooling will need to be safe for the operator, equipment and facility. The design will reduce risk to the operator by considering ergonomic parameters to ensure optimal use. Likewise, considerations will be taken into the design to ensure that the operator, equipment and environment are not at risk of injury/damage. Proper fatigue and fracture analysis will be conducted on components to determine safe operating life, as well as scheduled maintenance/inspection intervals and procedures.

Initial tests were conducted to determine the force required to pull insulation over the tube and around various bends. The goal of the test was to determine the range of forces involved in the current installation process to better understand how the future system should operate.

The force test identified several points along a complex geometry specimen with focus on significant bends or changes in geometry. The next step consisted of attaching a force scale to the insulation and pulling it over the specimen and acquire data at each point.

As one could expect, the force required to install the insulation rapidly increases following each change in geometry, as each bend increases the contact area between the tube and insulation, thereby increasing the friction. The test was concluded at the final point when the force required to overcome friction between the tube and pipe exceeded the maximum allowable force on the force scale. 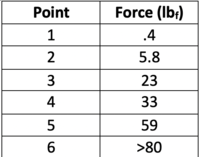 Calculated force at each point 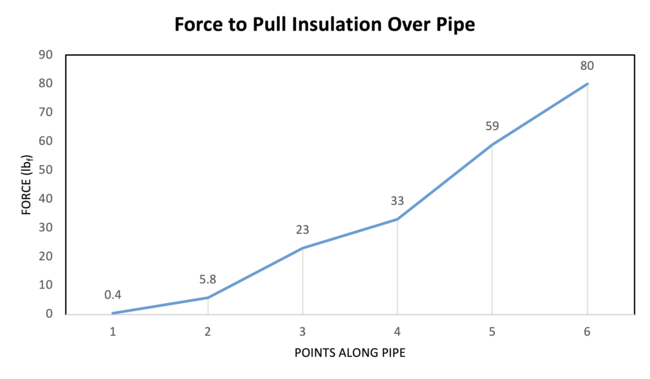 Force to pull insulation over pipe

An early design concept features a "chug-and-tug" method. In this design, the tubing is fixed while the system engages the tube via a set of rollers. The rollers drive the system along the tube, around any sort of bends and geometry, while simultaneously gripping and pulling the insulation behind it. This in turn will reduce input from the operator and ease the installation method.

Current prototype system consists of 3D printed materials. Future designs will incorporate more robust materials such as aluminum. Current analysis is underway regarding the materials for the rollers. Current concepts include utilizing an elastomeric coating material to allow for additional friction between the rollers and titanium tubing, as well as elastic distortion characteristics to properly grip tubes of various sizes while using only a single roller design. 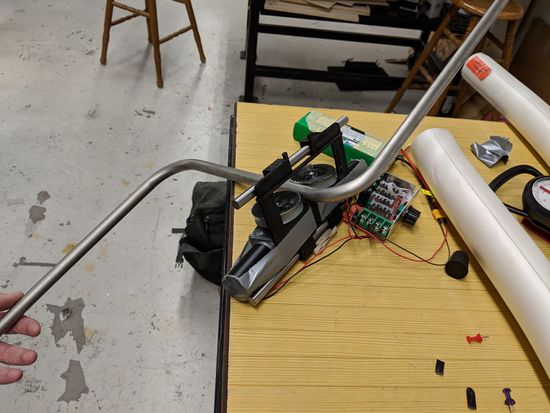 Building off the previous design, the second prototype features some distinct new features. The design is composed of seven subassemblies that all incorporate into one cohesive system.

The system includes the following:

The reversible tug redesign features the addition of a third motor/roller system to increase the overall grip provided to the rollers. This results in a triangular frame constructed from off-the-self 8020 aluminum t-slot railing. The substitution of aluminum railing over 3D printed materials introduces greater versatility, ease of future modifications, and strong and more durable material. 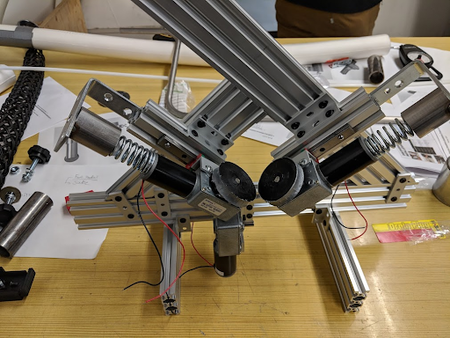 The bullnose assists with tracking the insulation along the tube. During initial insulation installation testing, it was noted that the insulation would frequently bind up when encountering a bend in the tube. This would increase the force required to install the insulation. A method to mitigate this issue is with the bullnose. The insulation mates with the inside of the bullnose, allowing for a tight-fitting assembly. The bullnose was machined out of aluminum. The fabrication of the component consisted of both lathe and milling operations. 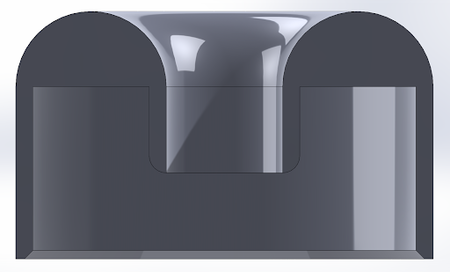 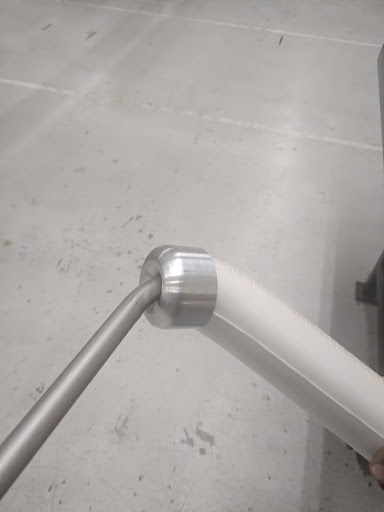 To circumvent this, the finger trap was cut in half. By reducing the length of the finger trap, the overall grip area decreases which, although reduced the total pulling force, it also reduced the build up of friction on multiple bends. Currently, the two pieces slip over one another to provide a desirable balance between pulling force and induced friction. 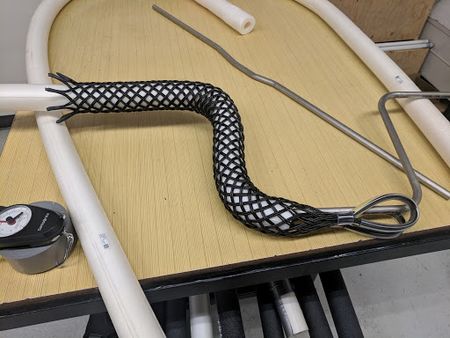 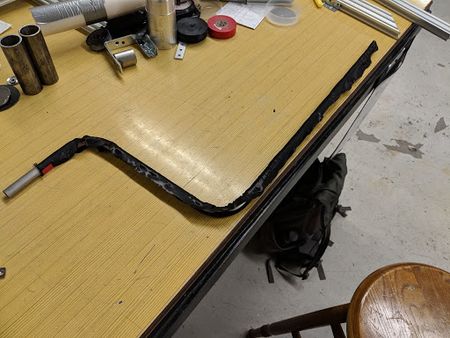 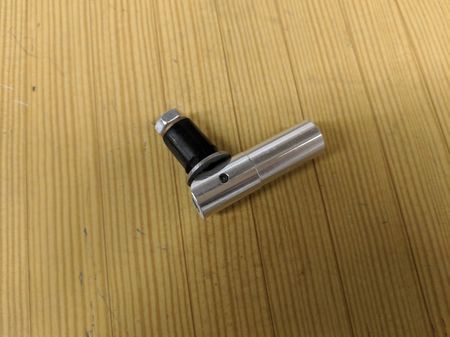 The cup holder pushes the insulation onto the tubing, and is attached to the winch. The cup was 3D printed. 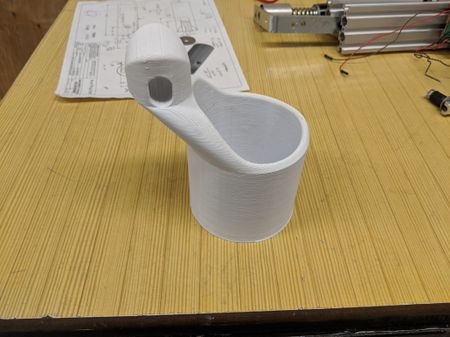 The winch pulls the cup holder and insulation over the tubing. The winch is easily operated with a power drill for convenience and modularity. The winch base is fixed to a table using c-clamps, as is the post which fixes the copper tubing. 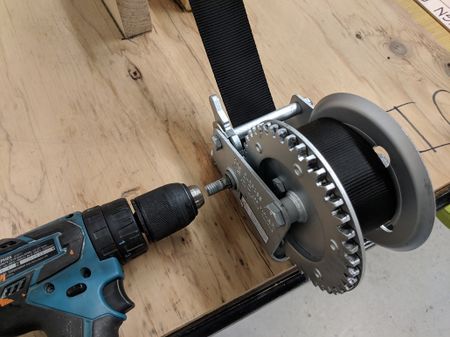 Overall, both systems indicate satisfactory proof-of-concept. Both systems require further development, should they be implemented into The Boeing Company’s manufacturing and assembly processes.

The lightweight operator-held tug allows for agility and ease of operation. However, the handheld system does inherently require for minor assistance from the operator. The system is not entirely autonomous and some user intervention is still required.

A clip of the tug during operation can be viewed here. 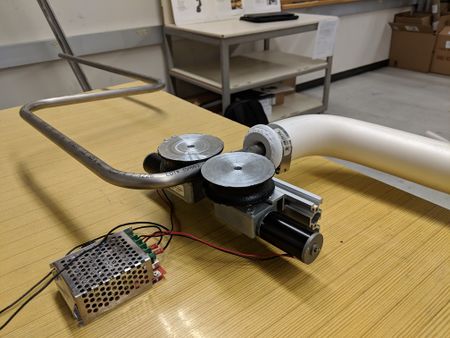 A second design solution is presented here as the Pusher. The quasi-static state system allows for a more ergonomic approach to installation, yet it still requires the operator to guide the insulation along the tube, especially at sharp bends.

The system comprises of a winch that is driven by a manual power drill. The power drill was selected because of high versatility, as it is a common tool found in any shop. This power drill provides ample torque to drive the winch, which pulls the insulation over the stating tubing.

A clip of the pusher during operation can be viewed here. 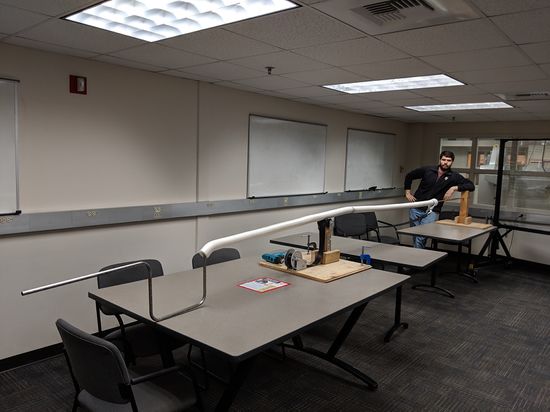 When creating a DFMEA, it was found that the greatest risks were related to the motors and potential pinch points. Because of high torque requirements, it is important that they are not powered on unintentionally. Unintentional motor activation could lead to something or someone getting caught in the rollers or the winch mechanism. If the motors do get caught, motor controller may burn up. It is also possible in this case for the gearboxes on the motors to strip. Any one of these things will render the devices completely unusable. While a way to stop this has not been implemented in any of the current designs, it is recommended to add some kind of current-limiting circuit to the motor controller to circumvent these issues.

Another potential failure point is where the devices apply force to the insulation. If there are any sharp contact points, it could damage the insulation causing the component to be scrapped. To mitigate this, the cup on the pushing device was made to have smooth edges and on the pulling device the insulation is attached at the end where it will be cut off anyway.

To test the designs, a scale was used to verify that they would provide sufficient pulling and pushing forces. The time to install with the devices was also measured to make sure that they met the design requirements. Because both designs will never be manufactured at any significant scale, the materials they are made of will not have any real environmental impact. That being said, both designs are made of recyclable materials. The pushing device is made mostly of plywood which means it’s also made of a renewable resource. Our design also in no way increases wasted material over the previous method of installation.

The primary concepts pursued were the “Chug & Tug” method and the “Pusher” method. Overall, both systems indicate satisfactory proof-of-concepts. The lightweight tug allows for agility and ease of operation, pulling the the insulation as a truck would pull a trailer, around the bends in the tubing. However, the system does inherently require for minor assistance from the operator while further development would be required. The system is not entirely autonomous and some user intervention is required. The same is true for the foam pusher system. The quasi-static state system allows for a more ergonomic approach to installation, yet it still requires the operator to guide the insulation along the tube, especially at sharp bends. Considering the solution used before these systems were developed, either design would significantly improve the ergonomics that the operator experiences during installation. User fatigue is greatly reduced and installation times are also decreased by a reasonable margin. 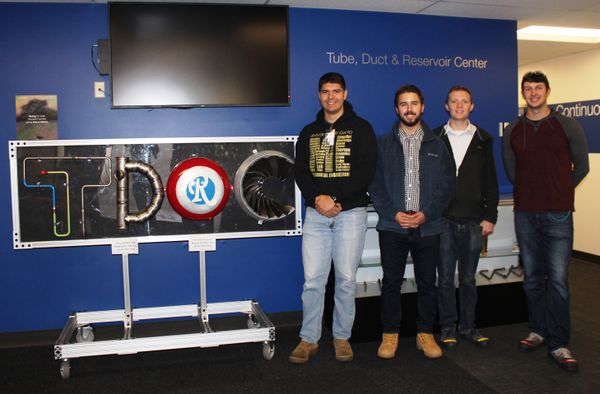