This project aims to provide insight and models on how to expand the existing microgrid on campus to include the future generation capabilities of steam turbines and a PV solar array to support critical loads and maximize efficiency within the microgrid.​ Our analysis will reveal pertinent issues associated with the expansion of the microgrid and will expose the pros and cons pertaining to the capacity, connectivity, protection, and overall efficiency of the grid. We will also highlight the best suited technology for these applications.

A capital project to install steam turbines to the campus energy plant for power generation is currently underway thanks to the help of multiple senior design projects. The turbines will be the basis for the first microgrid on campus to reduce energy costs and support critical loads during power outages. The overall UI microgrid scope includes the entire campus, with a total of 143 floors, excluding Northern farms. The current generation for the campus microgrid includes the steam turbines and the solar panels that will be placed on the roof of IRIC. This project will expand the microgrid further to include a utility scale solar PV array of approximately 1.0 MW in size. With these sources of generation connected into a microgrid, we will be able to keep critical infrastructure on campus running in the event of the grid going down.

1. Expand the current campus microgrid design to integrate the new solar generation from the 1 MW array, the IRIC array, as well as the critical load of the wells. 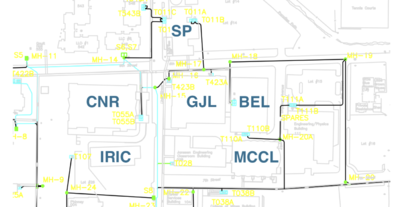 3. Determine which loads can be supported given available generation and under specific use case scenarios.

4. Account for seasonal changes and their effects on energy efficiency.​ 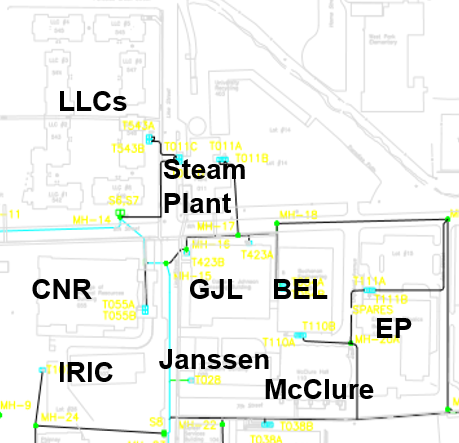 The buildings being considered

We will be using PowerWorld to simulate the expanded microgrid. The decision to choose PowerWorld instead of following what the previous team did, using the Real Time Digital Simulator with SEL relays and an RTAC, was done because of how much more can be accomplished with PowerWorld. We will be able to verify the previous team's design while also including different types of analysis. This program will also allow us to easily add onto our design and to change the data within the simulations. We will be able to test different use cases within PowerWorld including a worst case scenario and steady state operation.

The following are the various different simulations that we completed: 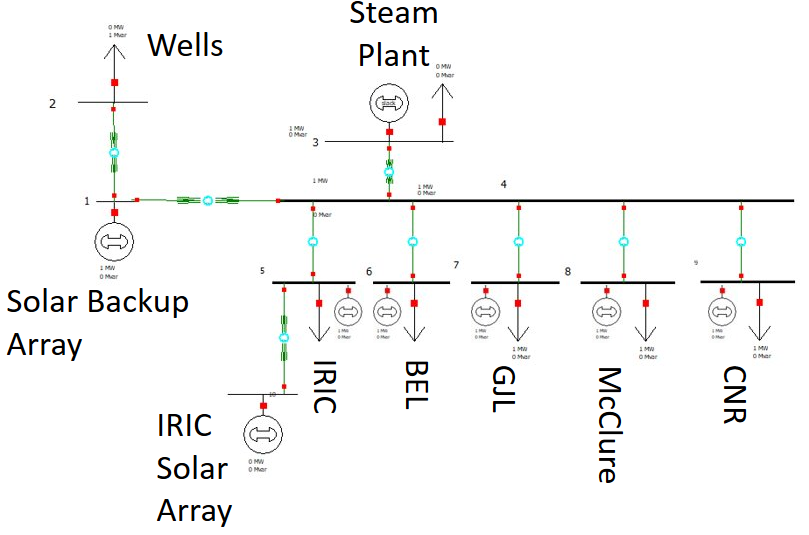 For the power flow analysis, there are two different cases that we simulated, the best-case and worst-case scenarios. Both power flow analyses were done under the assumption of rated equipment values and a 0.9 lagging power factor for building loads The worst-case being when the critical loads of the wells will need to be fully powered for fire suppression. Under the circumstances of the backup array being insufficient due to lack of sunlight or other failure, loads can be shed and power from the Steam Plant, backup generators, and the IRIC solar array can be harnessed to support the full loads of the wells.

The best-case being when the well pumps need no power and the excess generation can be used throughout campus. There will be a total of 1.645 MW of excess power.

For the seasonal analysis, we used data given to us by Facilities and the Solar Backup Generation team to simulate power flow analysis at each month, starting in January. The seasonal analyses were done at normal operating conditions, with the microgrid islanded from the power grid.

The following graph showcases the total load consumption and generation for the entire microgrid design. This includes the backup generators, the noncritical loads, and the losses of transmission lines and transformers. The total consumption is from the noncritical and critical loads currently included in the microgrid design as well as the losses due to the transmission and transformers calculated by Powerworld. As seen in the graph, we will have excess generation while islanded from the grid and in the best-case scenario. 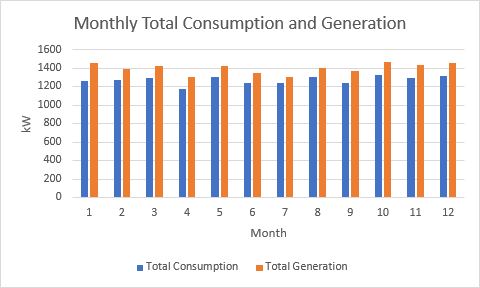 The following graph shows all the different sources of generation and loads that we deemed important and critical. 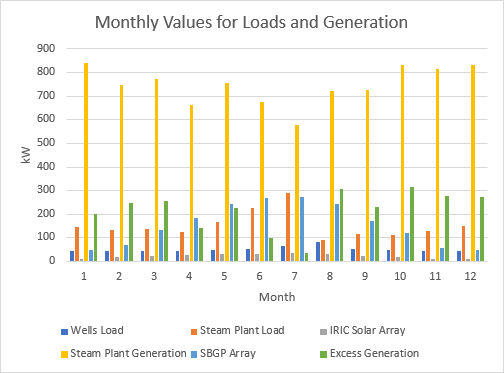 Monthly Values for Load and Generation

Since the wells do not normally take much power to operate, there will be excess generation during all months of the year. When both wells need power is when issues will start to occur, and load shedding will need to be implemented. 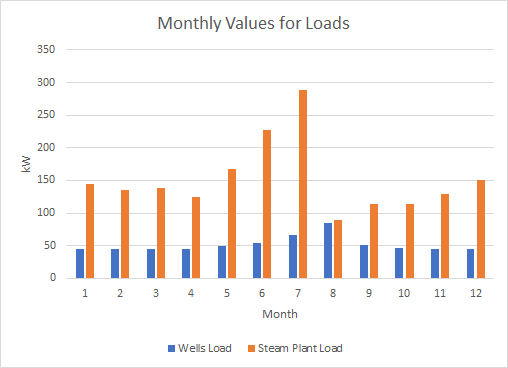 The monthly generation values showcase that the steam plant will be the main source of generation. Since the backup generators do not change depending on the month or season, they were not included on this graph. The excess generation shown in the above graph is calculated from the total consumption and total generation from the entire microgrid design in a best-case scenario. 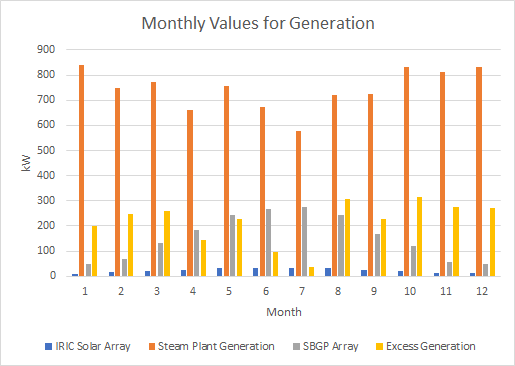 The fault analysis provides a selection of switches, as well as the setting of relays and stability of the system operation. This analysis evaluated the faults at each of the individual bus fault generation source (IRIC, Steam Plant, and Solar Backup PV Array). Each analysis from the generation source consisted of a line to line and a line to ground fault. Depending on the generation source there is a small difference of about 0.8 phase voltage difference. Each analysis shows not only the fault voltages and phase angles but also the fault currents and phase angles. Shown below is one of the fault analyses, Solar Backup Array – Bus Fault – Single Line-to-Ground. 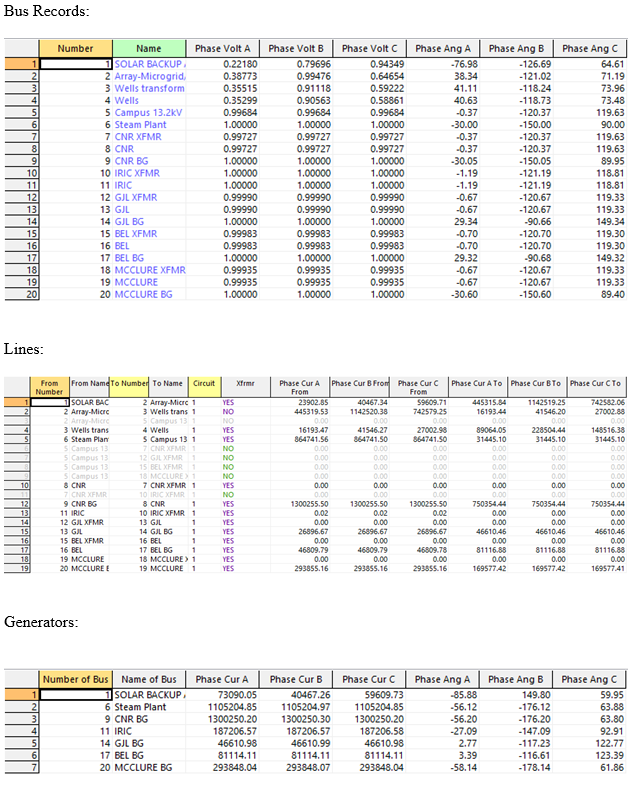 For this analysis, we will have a failure of one element in the microgrid and then analyze how the missing element will affect the rest of the microgrid. The elements can be transmission lines, generators, solar arrays, or buses. Shown below are results from disconnecting the transmission line between Campus 13.2kV bus and connection with every building including Array-Microgrid/Array-Wells bus.

For the Label column, it shows the actions we did, and also, we can clearly see the action at the bottom right table when we select any label in the table. For the violation column, it completely shows ‘0’, it means the system has no overloaded line, what if it shows ‘1’, then it means there should have overloaded lines. For the islanded load column, it means when you disconnect one element, you will loss the corresponding power, like the first row, if we disconnect the transformer between solar backup array and Array-Microgrid/Array-Wells, then we will loss 700 MW power.

Results when shedding each load

This budget is taken as the constant costs, such as the price of cable per foot that needs to be run underground within the 1-inch conduit. Due to code standards 40 conduit can be run underground, but 80 must be run above ground. Most of the conduit will be run within the steam tunnels but for what isn’t it will be a variable cost. What makes it a variable cost will be the cost of labor, cost of equipment, as well as how many feet will need to be dug up to code standards. The other main variable cost consists of what type of landscaping and concrete work will need to be done. On the right side of the sheet above you have the total fixed costs, with your cost of risk insurance being 1% of the total fixed costs. The total cost was also adjusted with taxes as well as inflation of up to 15% to give a more accurate representation. The only cost during this project consisted of the EXPO poster.