The ACRA manual lathes can be used to cut external threads, and they are capable of producing better results than cutting threads by hand using a die. 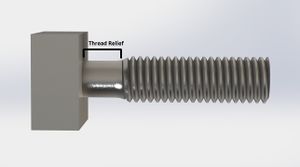 The section of the part to be threaded should match the nominal diameter of the threads to be added. For example, a rod to be fitted with 1/4"-20 threads should be a 1/4" rod. (See thread charts for maximum and minimum rod and thread diameters.) Also, the end of the rod should have a chamfer at least as deep as the threads to be cut. This will make the threads cut cleaner. Finally, a thread relief section should be added behind the threads if possible.

The thread relief zone should be at least as long as the tool is wide, to allow for adequate clearance.

1. Install the workpiece on the lathe, using either a chuck or a collet.

2. Set the spindle speed and direction.

3. Set the powerfeed speed and direction. Using the two gear change levers, select the desired thread pitch. This controls how far the carriage moves per revolution of the part. For setting the direction, you have two options. The preferred option is set the carriage direction to move to the left, toward the chuck, when cutting right-hand threads. In this configuration, the tool will be mounted facing up and the part spin direction will be forward (as noted above). This makes it easier to see the cutting action. Alternatively, you can spin the part in reverse, set the powerfeed to move the carriage to the right, and turn the cutting tool upside down. This is only recommended if for some reason it is important for the carriage to move to the right while cutting the threads.

Several important parameters need to be set on the carriage:

4. Set the compound angle to exactly 59.5°, angled toward the spindle. The compound will be used instead of the usual X axis to advance the tool for each subsequent cutting pass through the threads. (Standard threads are angled at 60°.) As the tool is advanced, it will be cutting material off of only one face of the threads instead of both faces. This causes less stress on the part and less stress on the tool, and gives more even threads.

5. Install the thread cutting tool. It will have a 60° cutting tip. Set the tool tip exactly perpendicular to part surface; check this angle with a thread gauge. Also check the tool height; a machinist's rule pinched between the tool tip and the part surface should be held exactly vertical.

6. Zero the X axis with the tool tip just in contact with the part; then lock the zero! This reference will be used every pass and it is important that it not be adjusted once the thread cutting has begun. 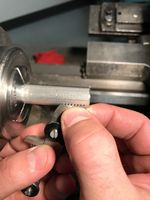 Check the marks after the scratch pass for correct thread pitch using a thread gauge. 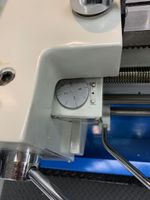 The indicator may not stop at exactly 1; just be consistent.

Before cutting the first pass, cut one "scratch pass" to mark the surface where the threads will go. Verify that the pitch and direction of these marks matches the threads you wish to cut.

To cut the threads:

1. Return the X axis to zero

4. If there is no thread relief area on your part, wait for the tool to get to the end of the threads, then do 2 things at once:

• First retract the tool from the workpiece using the X axis! This is important; if the powerfeed is disengaged before the tool is clear of the workpiece, you will suddenly cut a deep circular groove in the part and possibly ruin the tool or the part.

• When the tool is clear of the part, disengage the powerfeed quickly, so that the tool doesn't collide with the part or the chuck.

(It is a good idea to practice these steps a few times with the tool away from the part; it can be tricky to retract the X axis and then quickly disengage the powerfeed in one motion.)

5. Return the tool to the top of the threads (make sure the X is retracted far enough to clear the threads).

6. Advance 0.002” on the compound. (The first few passes will remove very little material, but as the thread cut deepens, more material will be removed each pass.)

Repeat these steps until threads are almost cut deep enough for the nut to fit. It is a good idea to calculate the approximate distance that the compound must be advanced, and check the nut fit frequently. Note; before checking with the nut, you will have to take a few passes without advancing the compound, due to flexing of the workpiece.

To finish the part, take the last pass by advancing 0.001” on the X axis, instead of returning the X axis to zero and advancing the compound. This will cut a small amount of material off of both thread faces and smooth the threads.