The goal of the project is to build a lab instrumentation system that allows for remote management of devices used in a lab setting, which includes both parameter monitoring as well as control over these devices. We want to build a system that can control a lab while using state-of-the-art security protections to safeguard lab data.

A previous project, [App Controlled Poinsettia Covering System] was completed in 2018 that allowed for remote control over a covering system at one of the University of Idaho's greenhouses. We want to expand on this project in creating a system that can respond to event triggers as well as handle more types of data for monitoring. Additionally, there is a growing problem with security in IoT enabled devices, as many of them have been developed and rushed to the market without information assurance in mind, or the devices are incapable of implementing standard security features. We want to gather measurement data for research and agricultural purposes and do this securely to prevent unauthorized access.

A web application that can manage lab instrumentation.

Cloud Functions provide an easy way to write simple HTTP endpoints that the front end can make a request to. They can also easily interface with other GCP features without the need to install libraries and modules. Cloud Functions could be used to connect to a MySQL database and make requests to manage users, sites, devices, and triggers, as well as handle the transfer of collected data from the Pi to the database and from the database to the front end for viewing.

The frontend interface would be responsible for accepting user input, communicating with the backend to retrieve data or take certain actions, and then displaying the results to the user. We considered three potential options for building this part of the system: Angular, React, or pure HTML and JavaScript. Angular is a frontend web development framework that was released by Google in 2016. It allows code written in TypeScript to specify how a web application looks and works, which can simplify the development process. TypeScript is a superset of JavaScript and adds features related to type checking. While some of our team members are familiar with JavaScript, none had TypeScript experience, so there would likely have been a learning curve involved with this option. After the learning curve, though, we would be able to take advantage of significant pre-built functionality for applications like this including processing HTTP requests and displaying data tables. React is another frontend framework that is a competitor to Angular. React was made public by Facebook in 2013, and it uses JSX as its language. Instead of being an entirely new language, JSX is a combination of JavaScript and XML that can be used to specify how a web application looks and works. Our team also had no experience with JSX, so this would have involved a learning curve as well. Based on our research and feedback from the developer communities, however, React has a much easier learning curve than Angular, so we likely would have gotten started more easily. React provides a similar set of features to Angular and is also designed for building this type of web application. The final option we considered was using pure HTML and JavaScript to build the user interface. Support for both of these languages is already part of every modern web browser, so there would be no additional software needed. We had team members already familiar with these languages, which meant we could get started right away with no learning curve. While this option did not offer the pre-built functionality of the frameworks, it did not require any external dependencies, making the application lighter and reducing the amount of maintenance needed over time.

Once data is received from the Pi via Pub/Sub, it will be stored in Google BigQuery. Google Cloud Run, a serverless computing platform gets input from Pub/Sub and moves it to BigQuery to be stored. The dataflow diagram below depicts how data is to move through the system.

An image of our initial prototype is shown below. 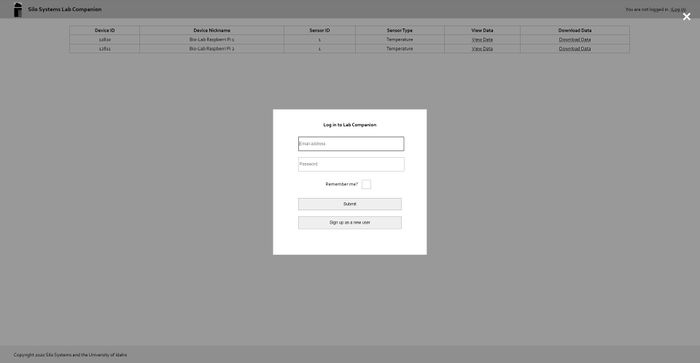 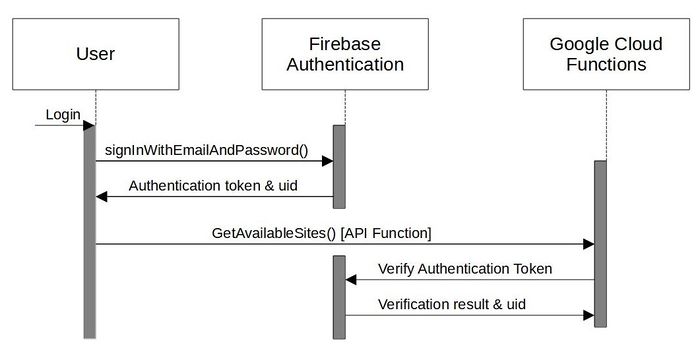 The schema below is from our site/user management database. This database is responsible for keeping track of the sites and users that exist in the system and the sites that a user is a member of.

The below schema is an example of a database for a site. Each site database has a "devices" table with an entry for each Raspberry Pi device that is attached to the site. A "parameters" table that keeps track of every parameter (sensor) that a Raspberry Pi device is collecting data from on the site. The "device_parameter" table connects a device with a parameter. There is also a "triggers" table that holds every trigger that exists on a device in the site. The trigger contains all information about what the device needs to do when a parameter reaches a specified value. A "device_trigger" table connects a device to a trigger, making the device monitor for when the trigger occurs. Finally, each parameter has its own data table that contains all data collected for that sensor from every device on the site. 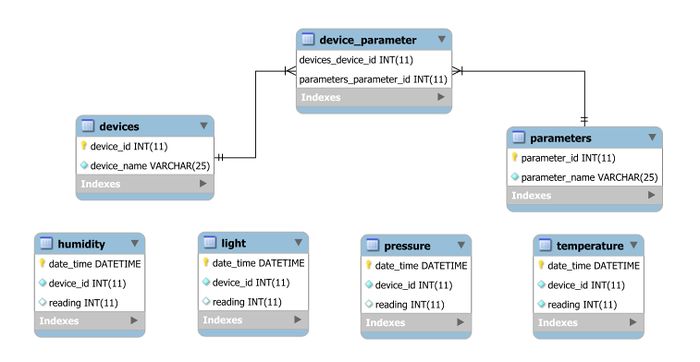 Over the course of the semester we set up a way to stream video from a Raspberry Pi to a user's browser, anywhere in the world. The way we accomplished this was using a virtual machine on Google Compute Engine. The Raspberry Pi uses a built-in utility called "raspivid" to capture video from the camera, and then uses a utility called ffmpeg to send the video stream to our server using the RTMP protocol. Our server has NGINX running, which allows the pages to be displayed, and also accepts the stream from the Raspberry Pi. The server then uses ffmpeg to transcode the video to the RTP protocol so that it can be ingested by software called Janus WebRTC Gateway. Janus takes the video from ffmpeg and makes it available in WebRTC format, which all of today's major browsers support - including on mobile. The user can then access a page on the server (we didn't quite get to incorporating it into our front end) and start the stream. In the testing that we've done at a few locations in the pacific northwest, the delay of the video was about half a second at thirty frames per second. This was with the video at a fairly low resolution, so the higher resolution streamed from the Raspberry Pi, the longer the delay would be before the user is seeing the video. Below is a diagram showing the process of getting video from the Raspberry Pi to the end user. 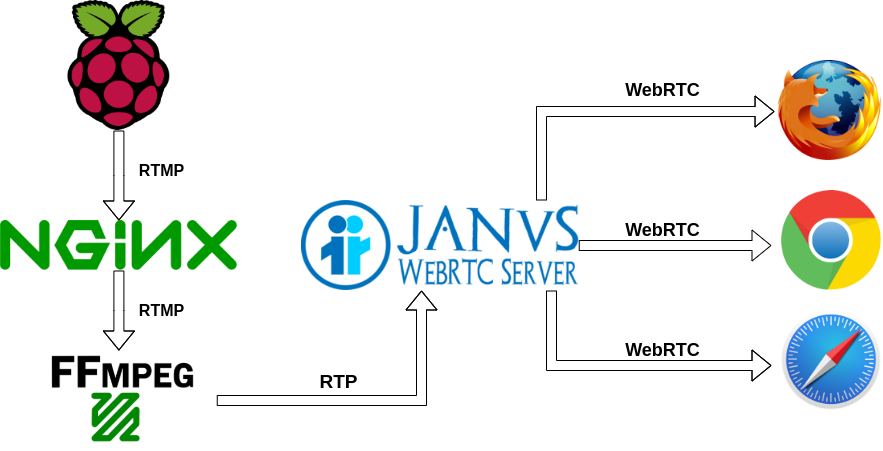 We ultimately decided to use pure HTML and JavaScript for the frontend interface. This would provide us the most flexibility in setting up the interface exactly as we wanted it and with full support for the Firebase and Google Charts APIs. We implemented a set of functions for handling HTTP requests to our APIs and for transforming the response data into tables for display to users. This choice allowed us to avoid the learning curve and processing overhead of the larger frameworks. Additionally, the new features introduced a few years ago in ES6, the newest version of JavaScript, have helped to greatly bridge the gap between JavaScript and the features needed to build a modern web application. 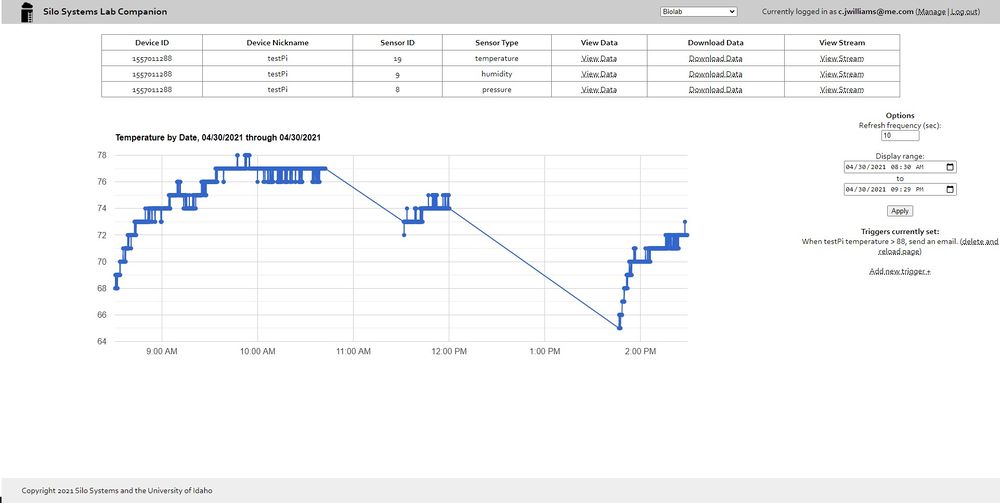