The goal of the project is to work together and utilize all the strengths of all team members to design & build a prototype that fulfills the requirements. With the rise of agriculture based feedstocks for biofuels and bio-based products there is a need for debaling agricultural based materials. The problem, then becomes how can we effectively & efficiently turn compressed agricultural materials into a loose, consistent density flow while still maintaining the maximum particle length? The UI-Debalers’ goal is design & build a prototype that fulfills these requirements. The final design will require minimal maintenance & little input from an operator. 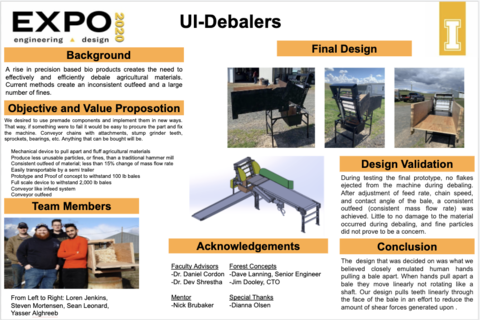 The goals we had set were: first design and build a small scale prototype to prove our concept will work. Second, design a full scale machine using Solidworks. We were on track to accomplish these goals but with the global pandemic of COVID-19 our schooling situation changed dramatically. Due to this we discussed with our client about changing our goals to something we can still accomplish and keep this project moving forward. The new goals we set are similar but with a 1 change. The new goals are as follows: first design and build a small scale prototype. Second, perform testing to collect data to aid in future design changes. The client wishes to have all our video files and data we collected from testing we were able to perform in the various stages of product development. Along with our final prototype design files.

The client placed a success matrix to help aid in constraint and specification. They asked for a consistent outfeed and not to create more fines. We as a team had to put numbers and what everything meant. The client stated that a fine is a particle under ⅛ inch in length. The “consistent” outfeed was to be so measured in lbs/min. We are limited to single phase 110 volt power. They also stated they wanted video of all tests to verify results. No custom parts to be used in the design and manufacturing of the debaler.

As the need for precision agriculturally based feedstocks for biofuels and bio-based products increases, there is a need to debale straw, corn stover, hemp stalks, and other baled herbaceous crops for feeding into industrial processing equipment. The fundamental question is how can we effectively and efficiently turn baled material back into the loose material it was baled from and feed it onto a conveyor for subsequent milling and processing? Existing debalers were developed to support dairies and feedlots where the objective is only to distribute the material in small enough “chunks for cows and other animals to eat. Existing methods either do not break apart the flakes well or create a large amount of fines in the process. Forest Concepts needs a debaling mechanism to break down large square bales of stover, switchgrass, and similar materials into uniform streams that can be conveyed into our Crumbler® rotary shear comminution systems.

We desired to use premade components and implement them in new ways. That way, if something were to fail it would be easy to procure the part and fix the machine. Conveyor chains with attachments, stump grinder teeth, sprockets, bearings, etc. Anything that can be bought will be.


4- Easily transportable by a semi trailer


5- Prototype and Proof of concept to withstand 100 lb bales

The final design was chosen based on all the previous testing we performed. The first round of testing showed that pulling a pitch fork up the face of a bale is an efficient way of taking apart a bale without damaging bale material. In the next round of testing we fashioned a cross bar out of angle iron drilled holes every inch to allow insertion of different (bolt based) teeth designs. This testing was intended to be a proof of concept that our cross bar and teeth idea would work. The test proved that round teeth are better than square teeth. The square teeth would plug with material and cease to do their job. Bolts were chosen to be used as teeth for budgetary reasons, as commercially available teeth proved too expensive and uncommon. The next round of testing with the first prototype demonstrated the need for the shafts to be solidly mounted together on a separate frame, with adjustable tension, isolated from the rest of the machine. In the first prototype, it was all one unit. While trying to change angles of attack, it was difficult to get the shafts realigned and tightened after each adjustment, as they were not fixed in an individual frame. In the final design, the cross bars and chains are mounted to shafts inside the frame of the “debaling head” as we referred to it. This allowed the angle of attack to be adjusted with needing to realign the chains. After the first tensioning of the chain on the second prototype, further adjustment of the chains did not prove to be necessary.

During testing with the first prototype, it was found that a small amount of pressure must be acting on the top of the bale face just before contact with the debaling head. This is due to the varying density of the bale at the flake boundaries. When the bale face was approaching a flake boundary, material had a tendency to be peeled off at the boundary rather than being broken apart as intended. This would cause clogging of the machine as material would peel off and bind up, generally in a roll. In the second prototype, we attempted to remedy this problem using hay springs on top of the debaling head referred to as “hold backs” in this report. It was also observed with the first prototype that the gap spacing, that is, the distance between the end of the infeed table and the edge of the teeth on the debaling head, proved to be important. This gap spacing affected the materials tendency to fall out in bunches, rather than loose material as intended. Too large of a gap would allow flakes to be pulled through the machine, too small would cause clogging of the machine.

Looking at conventional debalering machines they are basically the same. One rotating shaft with either teeth or hammers attached. Those designs all pose the same problem to our client. They induce shear forces onto the product stands and cause fines (smaller than ⅛”) to be produced. With this in mind a new way of debaling needed to be designed.

This design has a great deal of potential within agriculture based feedstocks for biofuels and bio-based product fields with more development. Further development can continue with creating a full scale prototype. For example, attaching a hay conveyor chain to the Debaler in order to work as a conveyor with a high-strength to be designed with two dull points to catch the hay bale and proceeds to take it up all the way to the it. Also, building an Infeed Conveyor that has two walls surrounding it all the way to the Debaler will help to work to protect the bales not to fall off from any side, and keep material contained once bales are untied. Moreover, some suggestions for strengthening the Debaler is to expand the number of cross bars and teeths. Also, maintaining and adjusting spacing of chains as much as the number of cross bars and teeth is increased in order to help pulling apart and fluffing bales in more effectively. Additionally, it is recommended to change the motor to one with a greater power output to develop power at a lower speed in order to avoid jamming in the future during operation, also, a more compact drive system to save space would be optimal. Furthermore, the current Debaler machine is really heavy to be carried and moved around by one person, so it would be great to attach some wheels under the machine to make it capable of being moved by a single person.

It was suggested that during testing we flip the cross bars 90 degrees, so that the leg of the angle iron could provide support in the case of deflection of the teeth. We stated in our presentation that we had done so during testing, however after reviewing our testing videos, we realized that we had not done so. In the future, it would be a wise choice to flip the direction of the cross bars as suggested by Forest Concepts.

During testing the final prototype, no flakes ejected from the machine during debaling. After adjustment of feed rate, chain speed, and contact angle of the bale, a consistent outfeed (consistent mass flow rate) was achieved. Little to no damage to the material occurred during debaling, and fine particles did not prove to be a concern.

Project Schedule
For the project, we were able to remain roughly on schedule until spring break of the second semester. Unfortunately, due to the outbreak of COVID-19, the school was forced to shut down campus for the rest of the semester, and move online. This presented a number of challenges that caused the team to move off schedule for the remainder of the project. With the closure of schools and non-essential businesses, procurement of materials for the final prototype became difficult. Additionally, lack of access to the university machine shop severely limited our access to precision tools equipment, further delaying the fabrication of the final prototype. The final prototype was constructed using only basic power tools and a welder, in a shop outside Moscow. Additionally, due to shipping difficulties, we were not able to procure the 3-phase motor used in the final design until the last week available for testing in April. This limited the team to only 1 day of testing. However, we were able to test the machine with a number of different settings, and observe possible improvements that could be implemented. See Appendix for Gantt chart.