The U.S Navy Acoustic Research Detachment has been conducting research on a barge in North Idaho and have been transmitting their recorded data from the barge to an on-shore omnidirectional antenna. 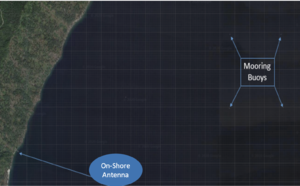 Their transmitting antenna is not automatically aligned to the receiving antenna on the shore. Thus, those on the barge must go up to the antenna and manually redirect it every time the barge moves to a new location. This wastes time and energy of personnel as well as delays research. Utilizing a control system that automatically aligns the transmitting antenna to the onshore antenna could significantly reduce waiting time. We will be creating a control system that will align the antenna within 30 seconds the moment the system is powered. Additionally, the system will have an on/off switch so that those on the barge will not have to go up to the antenna to power the system, further increasing the convenience of aligning the antenna. The precision of the antenna will also improve as the antenna adjustment will be a mechanical output of a calculated digital input position, which is more precise than the human eye.

The objective of this project is to create a working finalized product that can be mounted and implemented atop the barge. The system will also be configured to be a "plug-n-play" device and made so that maintenance and upkeep is fairly easy to conduct. 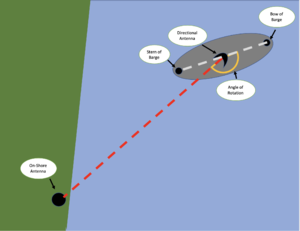 Once the device has been powered on, the first step of our system's process will be receiving a RS232 serial communication from a GPS receiver. This receiver will send the coordinates of the bow and stern of the barge. Once the message is received, a microcontroller calculates the position of the directional antenna and then, using the fixed coordinate of the on-shore antenna, determines the angle that the directional antenna would need to rotate (relative to the bow of the barge) to properly align itself to the on-shore antenna. One thing to note is that the microcontroller will adjust the angle of rotation based on what angle the antenna is currently at (again, relative to the bow).

Next, the microcontroller translates the angle into stepper motor steps and then send the result out to the motor where it will turn accordingly. The mounting rod of the directional antenna will be connected to the shaft of the stepper, therefore turning as the motor turns. To ensure the stepper motor moved to the correct position, an encoder will be attached and will send a signal containing the position back to the microcontroller where necessary angle adjustments will be made. Once the control system has deemed the motor to be in the correct position, the whole process will then repeat.

The design for our device can be split up into three different subsystems: Housing, Power, and Control. 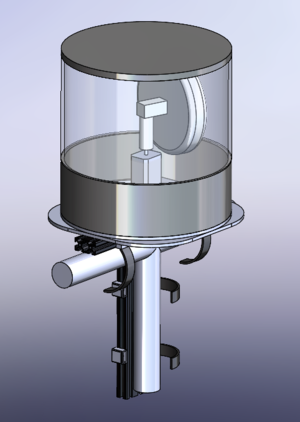 There are three aspects of the housing that are important to the final design.

The first is water resistance. The antenna will be mounted to the top of a barge on a lake, so exposure to the elements will be a threat to the electronics of our design. The housing must be able to keep water out from waves, storms, and high humidity. Rubber lining around the access ports of our housing to ensure a sealed environment is a possibility. A barrier around the antenna has also been postulated to keep wind and rain from affecting the position of our antenna.

The second is thermal management of the electronics. The stepper motor and power relay will be creating varying levels of Joule heat (heat shed from electronics) based on the level of control at a given point. In order to make sure the electronics don't overheat, analysis and measurements will be taken to ensure the heat can dissipate before damage occurs.

The third is a firm mounting to the hand railing of the barge. This is vital due to the nature of our control system. Calibration of our rotary encoder will be made to know what position it has to move to in order to point to the onshore antenna. If the mount that the rotary encoder sits on were to move, then this calibration would be off and it would point in the wrong direction, even though our control system would be working perfectly fine. A buckle-like strap will be used to provide a snug fit against the hand railing of the barge. This can be seen in the picture to the right.

The power supply system is made up of three components: a 9VDC Power Rectifier/Supply, a 9V PCB Relay, and a control ON/OFF switch. 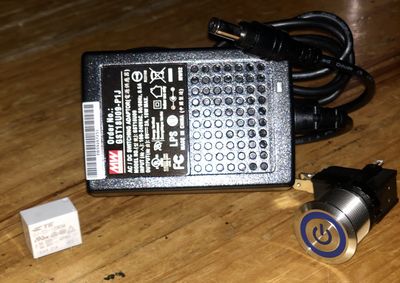 For the power supply itself, I selected a Meanwell Industrial 9VDC Power Supply. I chose this model because of its impressive operating temperature range and rugged design.

The relay I chose was a miniature PCB version, so that we could put the relay inside our enclosure without worrying about not having enough space for it. I found a model rated for 9VDC input voltage, with an operating voltage of 6.3 volts which matches the output voltage coming from the power supply.

Last I selected a reliable momentary actuation ON/OFF switch, with a clear blue LED indicator to show the system is powered on. Below you can see further specifications on each part. 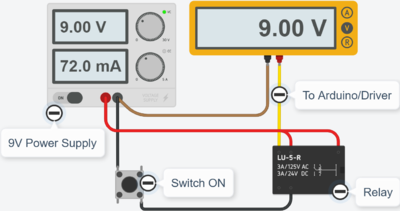 The circuit diagram above shows the wiring schematic of the power system, including how the three components will be connected together as well as to the rest of the system. This screenshot also shows a live simulation, showing that the relay and switch will not impact the output voltage, which reads 9 volts on the output pin of the relay.

The remaining task for the power system is to build it, which depends on the distance from the power panel on the barge to where the antenna will be mounted. I plan on using the picture of the barge that our client has provided us to estimate the maximum length our power supply cord will need to be. From there I will cut the power supply, and extend it using high grade wire, along with adding connectors to the end of wires that can be connected to the switch and relay terminals. This should provide the easiest installation experience when the product is delivered to the client.

For the stepper motor, we elected to use STEPPERONLINE's NEMA 17 Bipolar Stepper Motor. This motor has a step angle of 1.8° with a holding torque of 59Ncm (84oz.in). This motor would, however need a motor driver and would not be able to be driven directly from the microcontroller. Thus, we opted to use the HiLetgo A4988 Stepstick Stepper Motor Driver.

Using this driver would enable us to determine how many steps the motor should move and in what direction (CW or CCW). This driver also allowed for microstepping down to a sixteenth of a step, thus allowing for 0.1125° per step. Since the barge would be, at most, approximately two miles away from the on-shore antenna, we needed to get the motor to have as good of resolution as we could, and at the time of our choosing the driver, 0.1125° was the best we could find.

When choosing a microcontroller, we decided upon the Arduino Uno Rev 3. We chose this device since it had a serial port to communicate with the GPS receiver, a supply voltage of 9 volts, which turned out to be the same as the supply voltage of the motor driver, there were plenty of digital pins for connecting to the motor driver and encoder, and we were familiar with the Arduino coding interface.

The part that caused the most issue and relief was the rotary encoder. Since this was a control system, we needed to create a feedback loop to ensure that the antenna was in the correct position. An encoder would be able to do just that by reading the amount of steps the motor moved from its last position and sending them to the microcontroller to be analyzed. The issue was finding an encoder that worked with our parts. Our first theory was to use a hollow shaft rotary encoder that could slide on top of the motor shaft. This problem with this is that there were no encoders we could find that were small enough to fit around the motor's 5mm shaft. The next idea was to replace our motor with one that had an encoder built in. We managed to find one that contained the exact motor we had already bought, but the encoder was incremental instead of absolute. This is an issue because incremental only reads the motor's distance, speed, and position while the absolute encoders measured angular positions. Also, absolute encoders could maintain the antenna's position after powering down while the incremental could not.

We eventually came across a product called uStepper S. This device served as a microcontroller but also had a motor driver and a rotary encoder built-in. It was programmed to be used with the Arduino interface and had already had an Arduino library ready to use. Also, the motor driver was able to microstep down to 1/256th step (or 0.007°) and the encoder had a resolution of 0.0055°. With these resolutions, our angle and step calculations would become greatly more precise than we had originally planned for. In addition, this microcontroller supported an input voltage of 9V, leaving our power system unchanged. While this product does seem promising, it is sourced out of Denmark, so we have to check with our client to make sure we can use that part.

The code is the core of the whole project. Here, the process for reading the GPS signals, calculating the directional antenna angle, reading the encoder, and controlling the stepper motor takes place. Below shows the process of the code.

After initializing the system, the first part of the process is to read in the two GPS signals. There is a receive flag that determines if a serial message has been sent to the Arduino. Once that is confirmed, the GPS message is then parsed and the GPS coordinates, directions, and the transmitter ID is extracted and returned to the main function. Then, the satellite ID is checked to see if it matches the ID of the bow or stern transmitter, and the coordinate data will be assigned to their corresponding variables (bow or stern). This process is repeated once more, with the receive flag being turned off in between.

Once this is completed, the Arduino then uses the GPS data from both messages and the set data coordinate of the on-shore antenna and runs them through a trigonometry algorithm that determines the angle the directional antenna needs to rotate. After this, the angle is then translated into stepper motor steps and the motor turns accordingly. Once the motor stops moving, the encoder is then read to determine the motor's position. The reading, which is read in as angular data, is then compared to the calculated angle, and if they do not match, a new angle is calculated to assess the displacement of where the motor is and where it should be. The Arduino will then move the motor again and continue this process of correction until the encoder reading matches the original calculated angle. After this, the receive flag is turned off and the process goes back to the beginning of the main function.

Once θt has been found, it will be adjusted to account for where the directional antenna currently is. The larger angle will be subtracted from the smaller one, and if the current position angle is larger, then the motor will turn clockwise rather than counter-clockwise. This result is then sent to a function where the angle will be translated into stepper motor steps and then sent out to the motor.