The goal of the project is, to build a mobile and low-cost electroencephalography(EEG) device to measure brain electrical signals for educational purposes.

People know that the heart pumps blood, that the muscles contract, and that the brain thinks. But how does it think and how does it communicate? Currently, if you pulled a random person off the street, and asked how the brain transmitted a signal to the rest of their body, they would probably be unable to answer accurately. The main reason causing this knowledge gap is the inadequate funding and few realistic and engaging ways to illustrate how the brain functions in a traditional school system. Students having minimal knowledge regarding the most critical organ in their body is a substantial problem. This project aims at providing an inexpensive, consistent and easy-to-use solution to this problem. By creating an affordable electroencephalogram system for high school students to build and operate, teachers will be enabled to effectively demonstrate how the brain operates within its physical space. 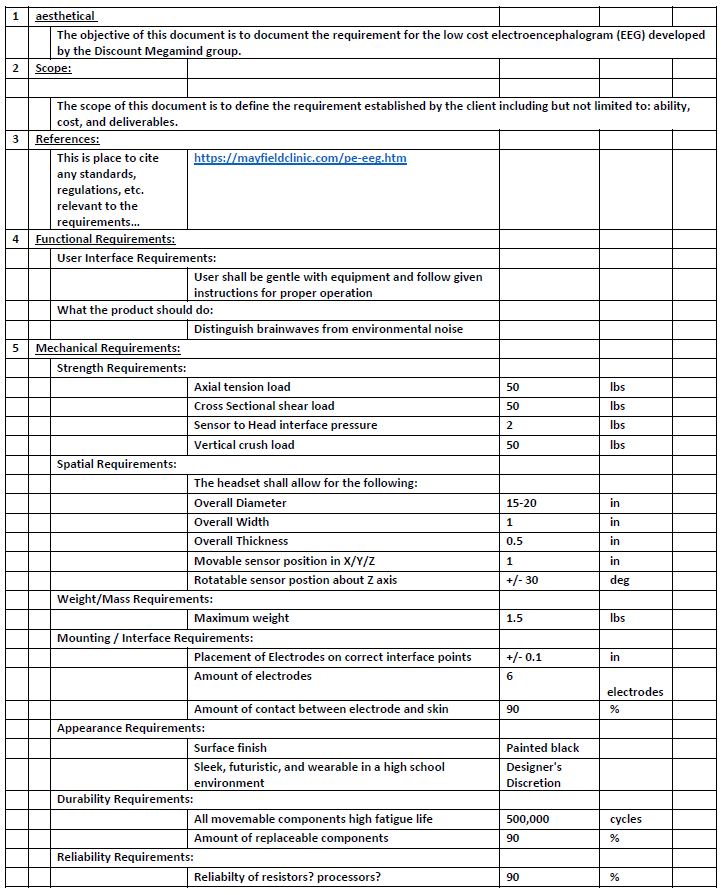 EEG signals are typically around 10 microvolts or less when taken from the exterior skin of the skull. In order to accurately depict these signals, we will need to amplify the signals to levels that would be accessible by our design criteria, an Arduino Uno R3 Microcontroller. By amplifying these signals and attempting to read from an unshielded electrode, we will also need to filter out any unwanted frequencies so that our input data is not construed. 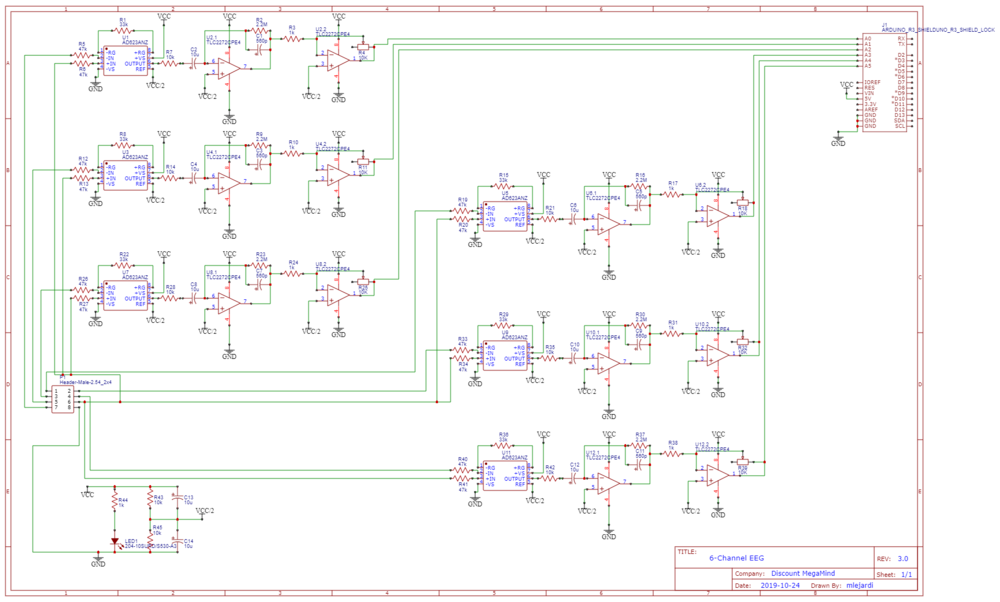 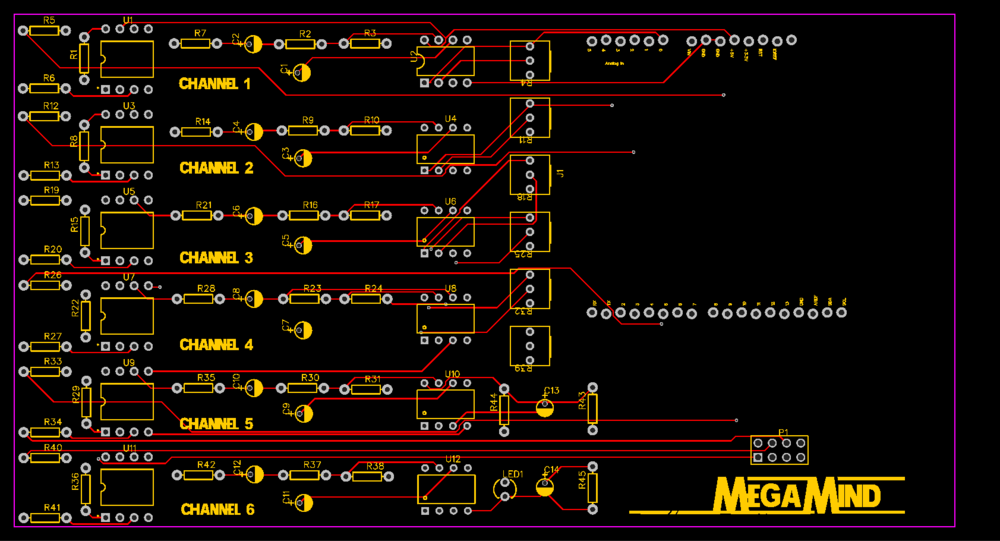 Initially, we printed multiple sizes and fits of the diameter of the headset to find the best shape for a person's head. We also considered different supporting frames to provide the highest amount of stability and chose to go with a frame that rests on the top part of the head. We then tested different mechanisms that affected the diameter size. The final design incorporates a ratchet mechanism that increases the diameter of the headset by 0.75" inches. Next, we determined the best locations to place the electrodes based off the parts of the brain we would like to record data on. The electrode arms were then modeled to reflect these locations. We decided on using a six electrode measuring system, with two arms of three electrodes. This decision was made to keep the overall cost of the device down, while still providing ample area to measure from. 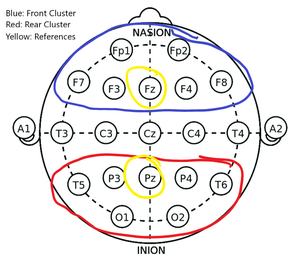 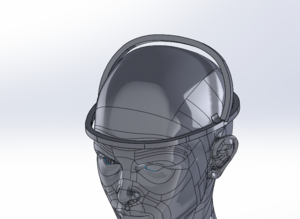 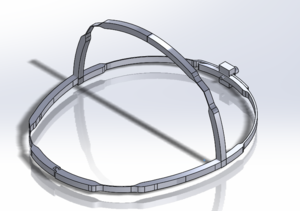 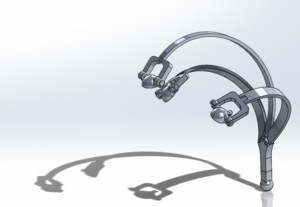 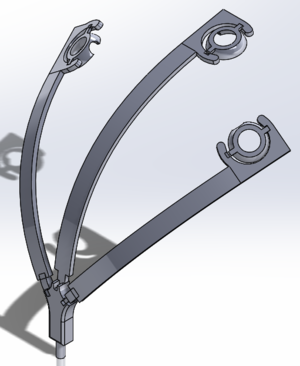 The first step we took in designing software for this product was to divide the task at hand into three different segments. The software was divided into: o Arduino and Software Integration o Graphical User Interface (GUI) o A Predictive Machine Learning (ML) Model

Proper integration between the Arduino that is connected to the circuit and a computer that will host the GUI plays a vital role in the rest of the components of the software. Understanding how the data is being sent, what type of data, and considering various baud rates for fast, yet lossless data was our primary target.

On the GUI part, our initial design considerations were to basically pick a technology/language to accomplish the task. We considered .NET Core 3.0 with Windows Forms which would make it way simpler to create Windows applications, vs, Python, which is a versatile language with a lot of libraries and extensive support for ML algorithms.

We initially tried to achieve this goal by changing the diameter of the headset through a pin mechanism located in the back of the headset. This design proved to be hard to adjust, as the error tolerances of the 3D printing fabrication made it difficult to create a perfectly circular shape. This lead to complications in inserting the pin through the holes. It required two people to properly adjust the headset. To overcome this issue, we designed a compliant ratchet mechanism. This allowed for the user to adjust the diameter size of the headset without the help of another person.

Another design we created to provide the headset with more adjustability was to have a ball socket connection between the frame and electrode arms. This design initially worked well, as the ball socket allowed for two degrees of freedom. However, the joint quickly wore out and became loose. This is due to the plastic printing material having a low surface hardness, leading to the joint scrape off parts of the plastic during normal operation. The design we came up with to solve this problem was to create a cylindrical slot in the frame and insert the electrode arm vertically into this slot. While this removed the degrees of freedom for the electrode arms, it provides a stable base. It is also easily moved to the different connection points on the frame.

We were able to use the previous group's work as a launching pad for our design and approach. We looked at where the device failed and used a different node placement system that would give us more accurate readings at the specific lobes of the brain. However, this device would be limited to only recording certain parts of the brain at a time instead of the whole brain to keep the project within an affordable price range. In order to compensate for that loss, we were able to develop a modular system that would allow the user to move the nodes to the other part of the head and then undergo the same stimulus to record the previously unrecorded part of the head. Because of this, we have had to develop different stimuli that would trigger different parts of the brain more effectively. After doing research on which lobes of the brain responded to different stimuli and were controlling different functions, we decided on using a puzzle for the occipital lobe, a long division math test for the frontal lobe, an auditory stimulus for the temporal lobe, and touching/texture test for the parietal lobe. In testing the circuit, we attached an electrode to the occipital lobe of our subject and had him work on a puzzle. We were able to record significant changes from when the subject was working on the puzzle vs. when they had their eyes closed.

For the GUI, we decided to use Python with the default tKinter library. We decided to steer away from .NET Core specifically because it only allows you to create windows apps, and we found it considerably harder to work with creating ML models in .Net. As far as Python goes, the tKinter library is not a fully fleshed out library for impressive GUI’s but it does the task and is also easy to build ML models. We initially tried to using Keras, an open source machine learning library written in Python, to develop our machine learning model. We later made the decision to switch to developing in C# as it is easier to create a Graphical User Interface with our personnel's experience. Thus, we switched our machine learning library to Keras.NET, the same library as earlier but written in C#. The member in charge of developing the machine learning model uses Ubuntu Linux 18.04 and uses Visual Studio Code as their development environment. There was a unresolvable bug with a dependency Keras.NET needed when trying to develop with it on Linux that halted progress. The next step will be to try finding a C# machine learning that is able to create a LSTM neural network that is able to be developed and tested on Linux. The most promising library we've found at the time is RNNSharp. 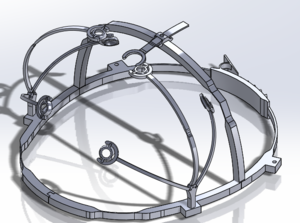 For the GUI, we decided to use Python with the default tKinter library. We decided to steer away from .NET Core specifically because it only allows you to create windows apps, and we found it considerably harder to work with creating ML models in .Net. As far as Python goes, the tKinter library is not a fully fleshed out library for impressive GUI’s but it does the task and is also easy to build ML models. We chose to implement our machine learning model using python with the Keras and Tensorflow machine learning libraries. We were able to create an LSTM (Long-Short Term Memory) model with these libraries.

Due to unforeseen circumstantial issues with the COVID-19, we were unable to provide a GUI for the project. We did manage to create a few prototypes but couldn't get hands-on with the device. However, we managed to find an open-source software called "Spike Recorder" by Backyard Brains, which had some really good GUI and could be used as a reference by future teams. We were unable to validate our machine learning model as the COVID-19 pandemic wouldn't allow us to collect data from our headset to be able to train our model with. 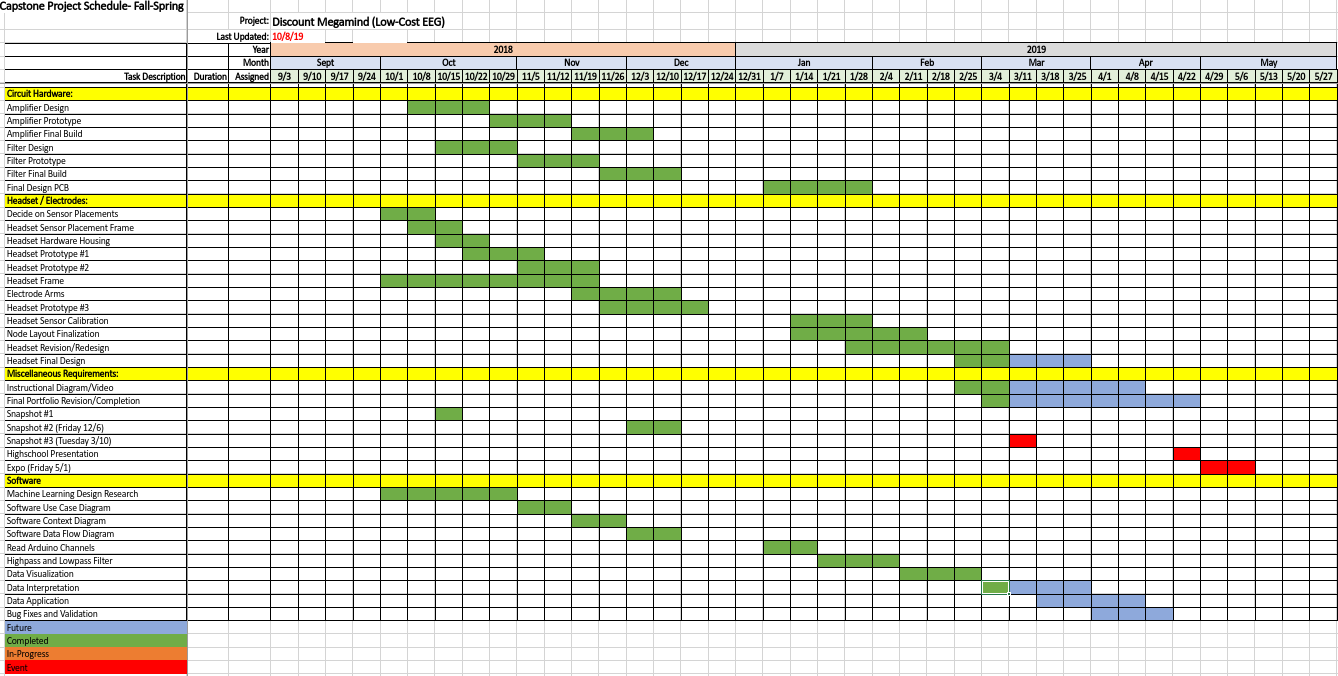 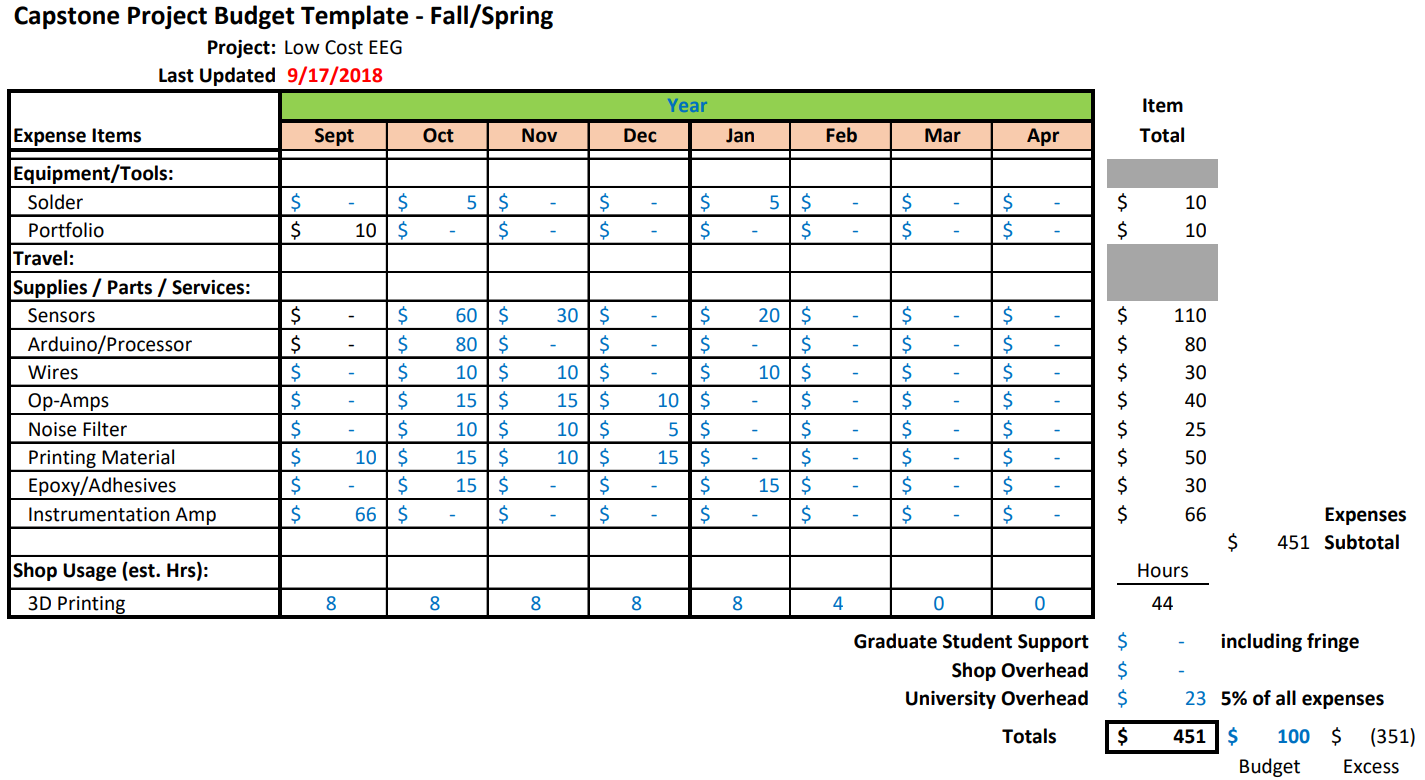