The goal of the project is to improve the dynamometer control system, data acquisition system and engine cooling system for the engine test cell in the Small Engines Research Facility (SmERF). This will culminate in improved usability, better data and more efficient testing.

The University's engine test cell has become outdated. The data collection is done manually with someone entering values into a spreadsheet. The cooling system cannot support extended high load operation with the clean snowmobile team's engine. The fuel delivery system has largely been neglected and is becoming unreliable and there is no system in place for collection of in cylinder pressure data that would be used for combustion analysis. There is also a lack of concise documentation for the systems in the test cell and many testing procedures only exist via tribal knowledge. Accordingly, engine testing is extremely inefficient and yields data with unknown uncertainty.

The expectation is that all "low speed" signals (torque, engine speed, lambda, EGTs, emissions, etc) will be recorded on the same device and will be displayed on one large screen in the test cell. If possible, signals from the ECU (Engine Control Unit) will be included in the "low speed" data set The cooling system will be modified or replaced so that cool down time between test runs will be greatly reduced or eliminated completely. A system for measuring in crank angle resolved cylinder pressure will also be added so that metrics such as IMEP (Indicated Mean Effective Pressure), MFB (Mass Fraction Burned), and covariance of IMEP can be used in evaluating engine performance.

Depending on the scope of the final design, new systems can be implemented for tens of thousands of dollars. This is well beyond the budget of the team and the ME department. Many of the existing systems have capabilities that are not currently being taken advantage of. Accordingly, it was advised to utilize these systems where possible.

The system must also be easy to learn for new UICSC team members and other inexperienced dyno operators. Easy to use and navigate documentation will be the primary method to achieve this, but robust design and layout along with intuitive user interfaces will play a significant role as well. Where possible, the system should be simplified

Where possible, safety improvements should be added to both prevent harm to operators and bystanders as well as the equipment itself. Looking to industry test cells as a role model is recommended. 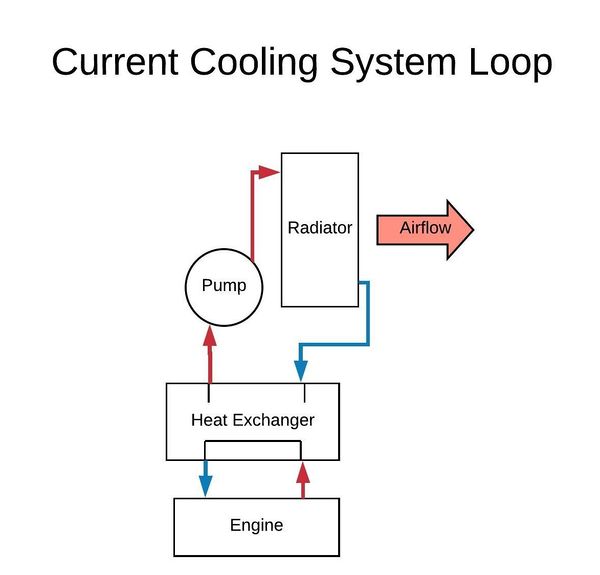 layout of the existing cooling system

The initial vision was to incorporate all of the data into a single acquisition system to be displayed on a single graphical user interface (GUI). The team explored the use of LabVIEW as a means to accomplish this since the University already possessed licenses. The initially proposed system layout is shown below. 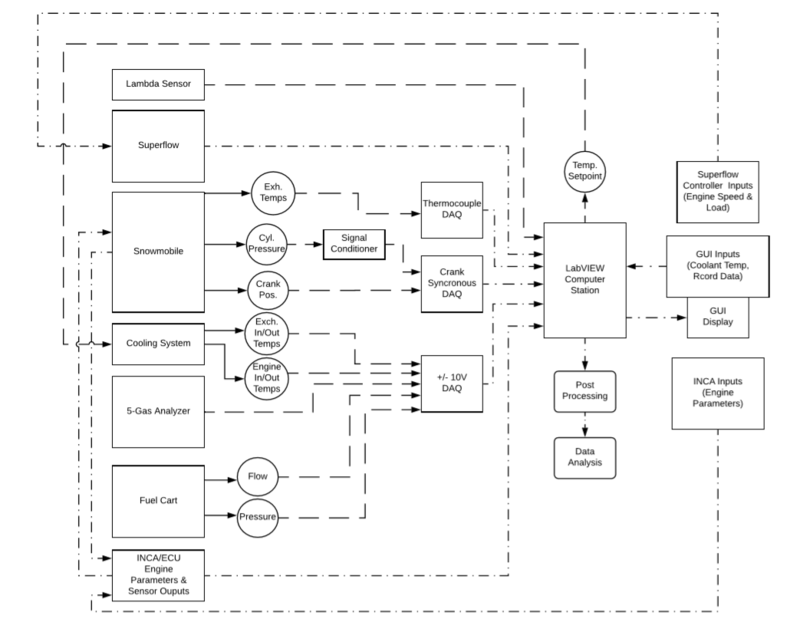 The original system layout pursued by the team. Note the central LabVIEW GUI that would have displayed all data

While this may have been possible to accomplish, the necessary hardware for taking measurements would have cost thousands of dollars more than the budget would have allowed for. Additionally, the team's working knowledge in communication protocols and software development was not sufficient to reach the level of integration that was desired between LabVIEW and the existing SuperFlow system or the ECU and associated software.

Many off the shelf options exist for combustion analysis such as Indicom from AVL, which is commonly used in industry. However, the cost is far too high to implement. Instead the team will identify alternative components and develop a system with similar capabilities for a fraction of the cost. The critical components that are needed are a high speed DAQ, an encoder to resolve signals to crank angle, piezoelectric pressure transducers for in-cylinder pressure measurements, and a manifold absolute pressure sensor to peg the in-cylinder transducer to.

The existing meDAQ remains as an option to record data, however it is old and failures have been documented in the past. Most importantly though, the software is limited to outdated windows operating systems and can only export data in the form of text files. Accordingly, it would be preferable to use a newer DAQ from national instruments or another company that could interface with LabVIEW, Simulink or a comparable software package that would allow for user configuration and better integration into testing procedures. The team identified a National Instruments PCI-6143 for it's high sampling rate, simultaneous sampling that allows for the same sampling speed for all channels and it's ability to handle enough channels to support testing with engines that have a much higher cylinder count than the 2 cylinder snowmobile engine currently in use.

The department already has multiple PCB piezoelectric pressure transducers and the associated signal conditioning equipment that have been used by the team for combustion analysis in the past. In the meantime these can be used, however these sensors can be consumable and cost approximately $600 each to replace. Furthermore, the implementation will require either modifying the head or the spark plug of the test engine to accommodate the sensor. Implementing a cooling system for the sensors would also be beneficial as it can greatly extend the life of the sensors.

The 8 analog input channels on the sensor box were configured to handle the signals coming from the O2 sensor, fuel cart, and emissions analyzer. Channels 45-47 had to be updated for a range of 0-5V and 47-52 were updated to a range of 0-1V so that there was adequate resolution for the incoming signals. Misprints in the SuperFlow documentation provided some challenge. The proper resistor combinations and procedures for changing ranges is noted in the team's final procedural documentation.


The testing screen that was previously being used had to be updated to include the newly added inputs and display information critical to engine testing in an intuitive manner. Additional channels were re-configured to calculate brake specific emissions and an unweighted E-score penalty. 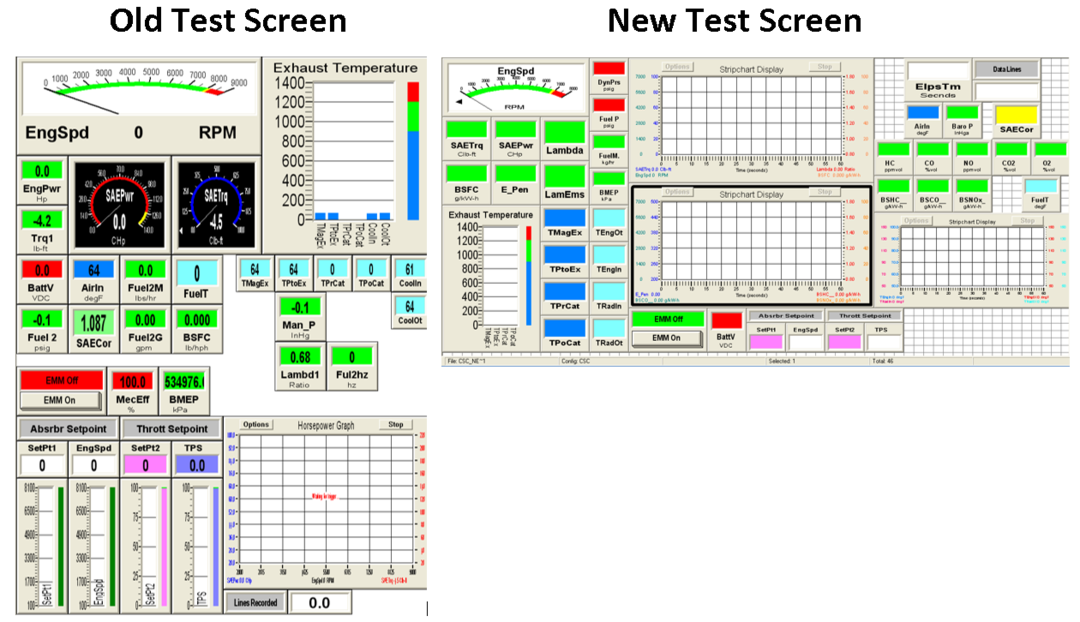 Comparison of old and new WinDyn screen groups, red x's on the old screen denote channels that were not in use or only applied to special test profiles. The standard colors on the new screen were changed so that anything displayed in red indicates that the engine is not ready to start. The use of strip charts was employed to better visualize calibration changes on critical operating outputs.

A test profile was created to continuously record data during manual dynamometer operation. The resulting data can be used in place of the old calibration spreadsheet as it incorporates all of the same calculations. Additionally, this data can be synchronized in Matlab with recorded data from the ECU.

Note that any changes to the SuperFlow configuration should be done in accordance with the procedural documentation on the shared drive. Failing to map new channels properly or add them to the channel order can cause unusable or lost data.

A living document named "Channel Mapping" on the shared drive should be updated to reflect the latest configuration of the SuperFlow and Inca recorders to make post processing easy.

The equipment listed previously was adapted to work with the 850 Rotax engine currently in use by the UICSC team.

Using pressure-crank angle and pressure volume data, it is possible to determine indicated mean effective pressure (IMEP), an indication of work extracted from the fuel; covariance of IMEP, an indication of combustion consistency/quality, work lost to pumping mean effective pressure (PMEP) in the crankcase; and crank angle resolved mass fraction burned, which can be used to guide calibration of injection and ignition timing for maximizing work extracted from the fuel.

The cooling system was redesigned using existing components. The existing setup had three major problems: radiator fan was at a deadhead; radiators were placed high and next to a wall, resulting in poor flow and hot air temperatures; the room and coolant on the radiator side lacked thermal mass and became heat-soaked. 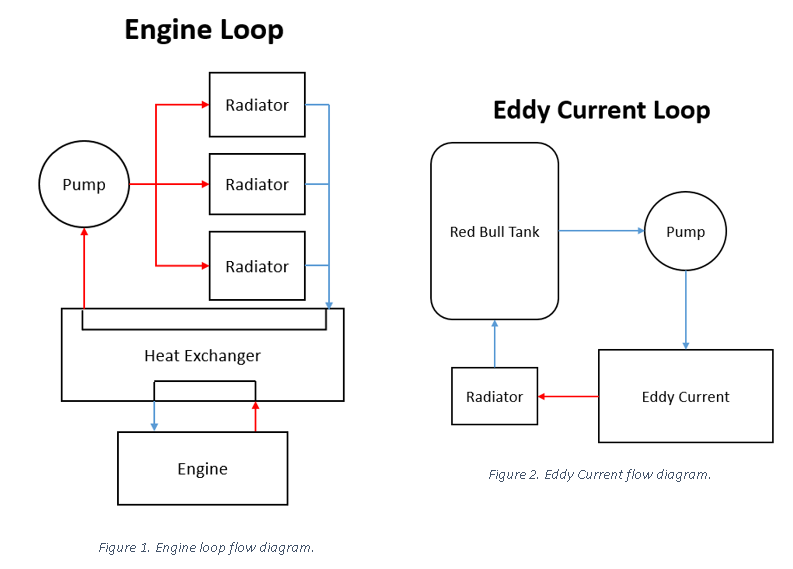 The final cooling layout incorporated three radiators on the engine side to reduce head (thereby increasing airflow) on the cooling fan and improve overall heat rejection. Adequate thermal mass remains for the eddy current cooling loop to stay with a single radiator setup. 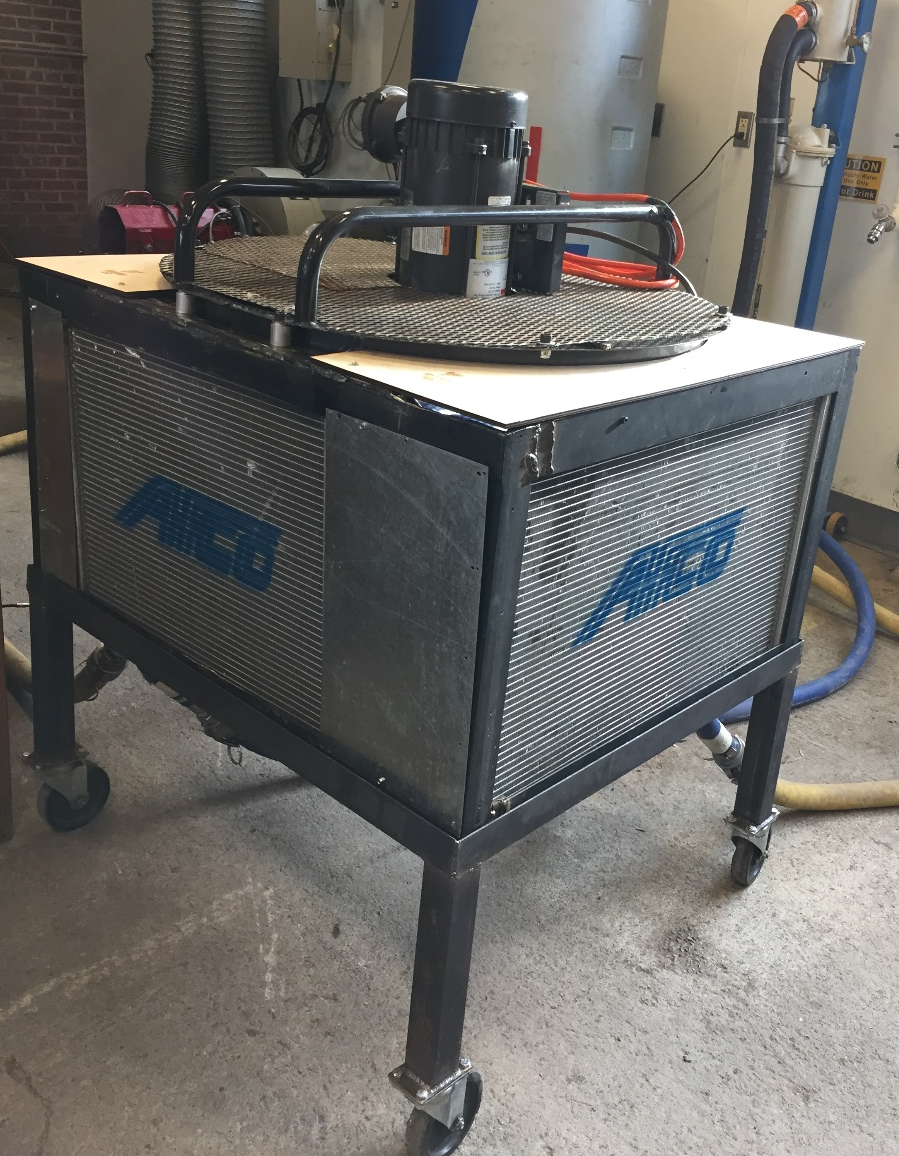 The radiators were moved to a mobile cart, that can easily be moved outside. This is beneficial to achieve lower air temps during most months of the year.

Final validation of all systems was not achieved prior to graduation. However, procedures for use and validation as well as recommendations for future work are documented in the Old Dyno New Tricks folder of the CSC team's shared drive.