Fuel cells exist as an alternative and cleaner power source option to fossil fuels, but as a product they tend to be a delicate mix of expensive, hard to replace, and easy to break. One of the ways they’re most susceptible to damage is airborne contaminants, with things like smoke, exhaust, and solid particles in the air being able to make a single fuel cell completely useless via irreversible internal damage. To prevent this kind of damage, adequate filters are needed to keep the internals of the fuel cell protected, but testing said filters is a roadblock on its own. Currently, it costs our client around $5,000 per test per filter to test the effectiveness of various air filters when it comes to safeguarding their fuel cells. Our team’s test stand design would negate those costs almost entirely and make testing easy and efficient in terms of both time and cost, as our design includes easy access to the filter housing so multiple filters can be swapped in and out for individual tests without the need of separate setups, as well as integrated data collection and readout to allow faster and easier-to-understand results.

Hyster - Yale is a company that builds forklifts and in these forklifts they are beginning to working with Nuvera fuel cell stacks. Forklifts are often used in places such as shops, warehouses, and factories. In these locations there are high amounts of volatile organic compounds such as: toluene, isopropyl alcohol, and benzene. When the fuel stacks are exposed to these types of compounds it detroys the interior of the fuel cell and they must be replaced, however fuel stacks are expensive so they must remian intact and useful for as long as possible. To do this filters are used to protect the fuel cells and filter the air so a very little amount of VOCs reach the fuel cells. The filters needed to be tested to ensure that they are adquate for the task at hand, however testing these filters is not an easy task. The current cost of one test per filter is about 5000 dollars and the filters must be sent away for testing. This test stand will allow Hyster - Yale for efficient and less costly in house testing.

This project has been worked on previously for the past two years. The previous test stand implemented two air quality sensors to test the filters absorbance of the VOCS, and was powered with an ATX power source and Arduino Mega.

The photo also shown how the old test stand functioned with labels showing the different components. 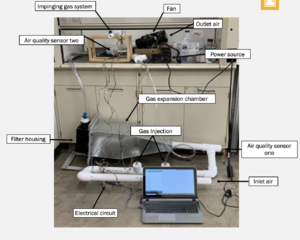 The filtration test stand needs to meet several design specifications in order to be both usable and reliable for testing filters for fuel cells. The test stand will utilize low cost air quality sensors and a gas injection system.

Must be able to measure: 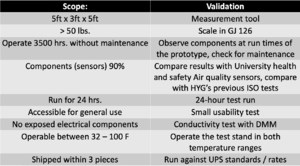 With the previous design in mind and using the old documentation Hevel figured out how the test stand operated. The inital design did test provided data from the sensors however Hyster - Yale would like Hevel to continue devloping the stand. 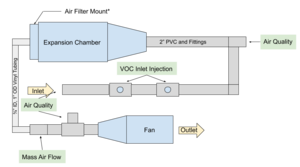 Hevel will do this by designing an air quality data acquisition system and mounting it to the test stand, integrating a mass air flow data acquistion, designing a more robust gas injection system, identifying a way to accurately determine injection concentration, validating air quailty sensor data and ideal sensor use, and clean up the design.

Hevel was given an inital test stand with the code, with the product requirements given by Hyster - Yale. 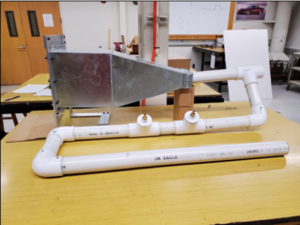 After inpecting the previous test and learning about the components and the design, Hevel proceding with version two of the test stand. For version two, the test stand was rebuilt based upon the informatuon given to us by Hyster - Yale. The filter housing was placed on hinges to make filters more accessible and interchangeable and the mass air flow sensor was implemented into the design. The eletrical circuit was rebuilt using an Arduino Mega and SGP30 air quality sensors, which were the sensors used in the previous design. Hevel added a thord air quality sensor for data on ambient air for calibrations and the code was recreated to include updates. In this stage, the Arduino, fan, mass air flow sensor, and power source will all be intergrated and used with an user interface for easy use. The following picture show version two of the test stand with labels showing components. 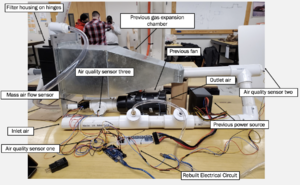 Air quality sensors are an extremely essential and are a main component to making this design a success. The SGP30 by adafruit was used in the past, howver Hevel would like to use multilpe types of air quality sensors in the final design such as the BME680. The use of multiple sensor will help validate results. The code will include multiple types of sensors and intergrate them together. 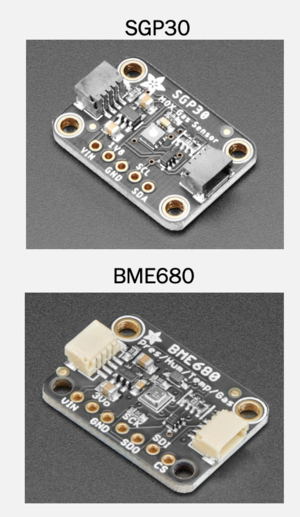 VOCs must be injected into the system to test the filters, to do this Hevel decided to rebuild the impringing gas injection system with slight modifications. An Altimeter is implented in the design to ensure the pressure remains constant and Hevel is working on a design to ensure that the amount of fluid in the reservior remains constant during the test. The final design will include two modules for test multiple gases or a higher amount of gases in a test. 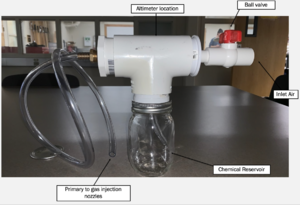 To make the test stand more compact and stable the piping will be shortened. The filter housing will stay on hinges, however a latch will be added for better sealing and to make house more interchangeable with different filter types and filter adapters. 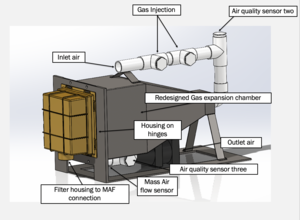 The expansion chamber will be rebuilt and resigned for more stablilty. The filter base will be replaced with one that is one peice for better sealing and easier filter housing mounting. There will be a stand for inlet air pipe to rest evenyl on after shortenting the pipe system and a stand to stabilize the chamber and allow outlet air to move though.

The final design will be placed into a enclosure to make the design more compact and will make sure the user is not as exposed to VOCs. There is a place for the electronic control system for easy operation. 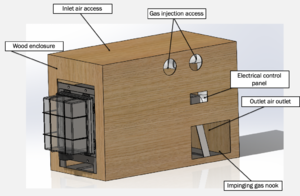 The final design will include an easy to use user interface with a screen, D-pad, and usb to extract data. All of the electrical components will be intergrated to work as one system. The data will be stored on the Arduino and will be able to be exported.

The screen will include a Manual and Automated test options. Automated Test: 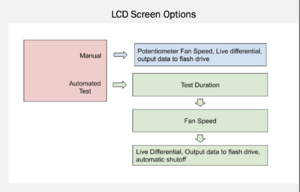