The primary goal of this project was to produce a prototype handheld optical scatterometry device that focused on cost of production and ease of use. This device is intended for use in laboratory, clinical, field, and educational settings. The portable aspect allows use for point of care and on-site measurements. The ease of use reduces the amount of training required. The affordability allows and encourages use in underfunded sites, education, and small clinics or developing countries.

Optical scatterometry is a method of determining the concentration of a contaminant— i.e. bacteria, proteins, or particulates— in a solution by measuring the scattering or absorption of a laser through a sample.

There are two primary variations of optical scatterometry. Their usage and methods of measurement are determined largely by the type of contaminant and it’s concentration. Nephelometry is the detection of light energy scattered or reflected towards a detector that is not in the direct path of the transmitted light. The detector in this scenario is typically placed between 30° and 120° from the direct path. Diluted colloidal suspensions scatter light such that the intensity of the scattered light is directly proportional to the concentration. This is typically used for low-concentration measurements, such as protein and bacterial samples, potable water tests, or other medical uses.

Turbidimetry uses a single detector directly in the path of transmitted light to measure the intensity of incident light. The intensity of this measured value is decreased by scattering, reflectance, and absorbance in the sample. Such measurements are used for high concentration or semi-opaque samples. That is, samples that are visibly clouded. Such measurements are used for water quality testing, such as grab samples from a stream or other water source in the field.

Existing nephelometers and turbidimeters tend towards bulky countertop machines or prohibitively expensive handheld models. This limits access for smaller facilities, discourages field use, and results in a reliance on central labs. 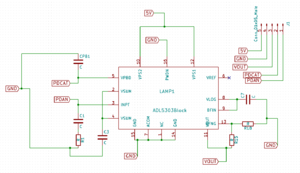 For light detection Osram SFH-213 photodiodes were chosen to be used. These diodes produced a current when exposed to light based off of the intensity ranging from 1nA to 125μA. In order to amplify this current to a readable voltage it was decided to use a logarithmic amplifier, so as to clarify the output. Two photodiodes were needed, one at 90° and at 180° relative to the laser. In order to raise the new voltages to readable values for the processor they went through additional linear gain. Due to the low light levels at the 90° photodiode it had slightly more linear gain to raise the values to a desired level.


An Analog Devices ADL5303 logarithmic amplifier was chosen for the final product. The datasheet was used to create a design for a printed circuit board using KiCad. The gerber files were then created and sent to PCBWays in order to be printed. These were then populated by the project mentor: David Klemer. 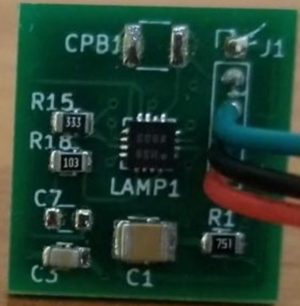 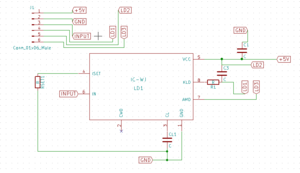 After much consideration, the team decided to go with a pre-built laser module with a built in lens. This would limit the amount of PCB's we would need to incorporate to the final design, as well as eliminate the need of calibrating a laser diode to a lens. 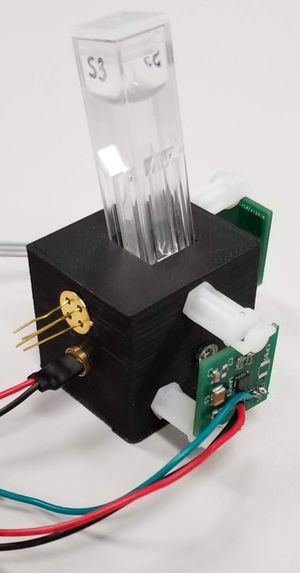 All aspects of fabrication were completed with University of Idaho facilities and tools. The motivations behind this decision include: constantly accessible materials, free of charge, and minimal wait time. The Making, Innovating, and Learning Laboratory (MILL) was utilized to 3D print all prototypes on a LulzBot Mini and/or a Taz 1 with High Impact Polystyrene (HIPS) filament. This resource could be used once a week with semi-accurate results, and prints could be dropped off and picked up within the same day. Unpreventable distortion did occur occasionally, but benefits far outweighed this con. University of Idaho tools such as a dremel, drill press, soldering iron, etc. were also used throughout the entirety of the project.

TinkerCad, a 3D modeling program supported by Autodesk, was chosen as the software to create all prototypes for the project. Since the tools are very basic and easy to apply, it was the most ideal program for a beginner. Tinkercad was also chosen because the project only required very basic geometric structures, such as squares, rectangles, and circles. In addition, files could be easily exported as both .stl and .obj for the users convenience.

The project required a module to encompass a cuvette laser, temperature sensor, and multiple photodiodes. However, the very first prototype was only made for a laser module with large windows, to visually see the cuvette, for the very first Snapshot Review.
Numerous revisions were made throughout both semesters to account for the deformities from the 3D printer at the MILL. In the beginning of the project, threads for a lens to focus a laser diode were designed but failed to print out. Self-tapping the hole could have fixed the issue, but it would have required purchasing a metric tap. Therefore, a unanimous decision was made by the team to abandon the laser diode and pursue a laser module. After making this change, perfect circular holes, proved to be another major issue for the University of Idaho printers. Therefore, a dremel was used to perfect the inaccuracies. An additional hole above the laser module was added to the design to account for a temperature sensor. The final design required the photodiode PCBs to be attached directly to the module, so everything could be mounted properly within the case. The laser module and temperature sensor were added through press-fitting, which secured them effectively. 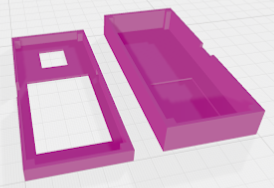 The case was designed into two seperate sections , one to attach the MCU development board and another to mount the final revision of the cuvette holder to. The entire design of the case surrounded around minimizing the entire space used to make the device as handheld and portable as possible. The lid of the case was designed first to properly fit the dev. board screen and gain access to the SD card slot and USB Mini port. The mini port allows for both external power and programming and the SD card for file exportation. The lid was also created to remove the cuvette top with ease. 5mm square corners were added in future revisions to account for screw holes. The bottom half of the case also had the square holes to attach brass inserts, so the two pieces could be linked together. To ensure the wireless QI receiver worked properly a 1mm high pocket was added to the bottom half of the case. Numerous revisions were also done on both parts of the casing, due to inaccuracies from the printer. The DC/DC boost converter PCB and Protoboard were mounted to the base of the case with mounting pillars, like the ones used with the cuvette holder. The QI receiver was simply super glued directly to the plastic, and the battery was tied down to the top of it with elastic material. The final was both handheld and portable and fit all components in an easy to access manner. 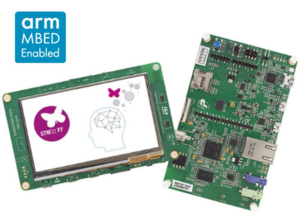 This project uses the STM32F7 discovery kit (STM32F746G-DISCO) for processing. This is an STMicroelectronics kit meant to showcase their SMT32F7 ARM Cortex-M7 microcontrollers. It features an STM32F746NGH6 microcontroller and several useful peripherals. This project took advantage of the 4.3 in. color LCD with capacitive touch screen, microSD connector, I2C bus, and the array of Arduino Uno V3 connectors. Using this kit simplified the programming process by allowing use of the STM32CubeMX board configuration tool and the existing STM32 libraries. The project was written using FreeRTOS and the STemWin graphical stack library. This allowed the production of a GUI to initiate sampling and display results in table or graph format. Results could also be stored in a CSV format on microSD for later review.

A thermal sensor was added to the design ,as a device accessory, in preparation of attaching a heating element in future implementations. Particle concentration can settle out over time, so the heat would excite the particles for more accurate readings. Therefore, the temperature sensor is necessary for exact temperature measurements. A Melexis MLS 90614 IR Thermometer was chosen for non-contact temperature readings, rather than an IC. The IC would have added an unnecessary complexity to the design of the cuvette holder and the case. The sensor includes a DSP chip within the housing which outputs information to I2C, so there wasn’t any need for an external PCB. The sensor also provides accuracy readings to 0.1 C.

To assist in the portable design of the scatterometer, it was decided that a portable battery and wireless charging would be beneficial. All of the components that were ordered for this part of the project were of Adafruit brand. A wireless Qi charging coil was connected to a DC boost regulator with integral LiPo charger to power the board and charge a Lithium Ion 2000mAh battery. 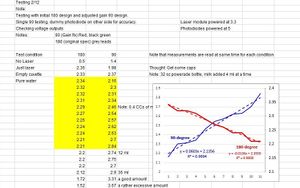 Initial testing was performed with a finalized cuvette holder model, using what would become the final implementations of the photodiode filter boards. Power for each component was supplied by lab equipment, and values were measured via multimeter. 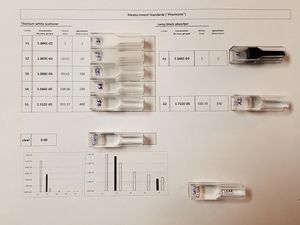 Phantoms were produced as standard references for testing and measurements. These were made by diluting titanium white and lamp black oil paints into clear silicon to produce scattering and absorbing samples of known concentration. 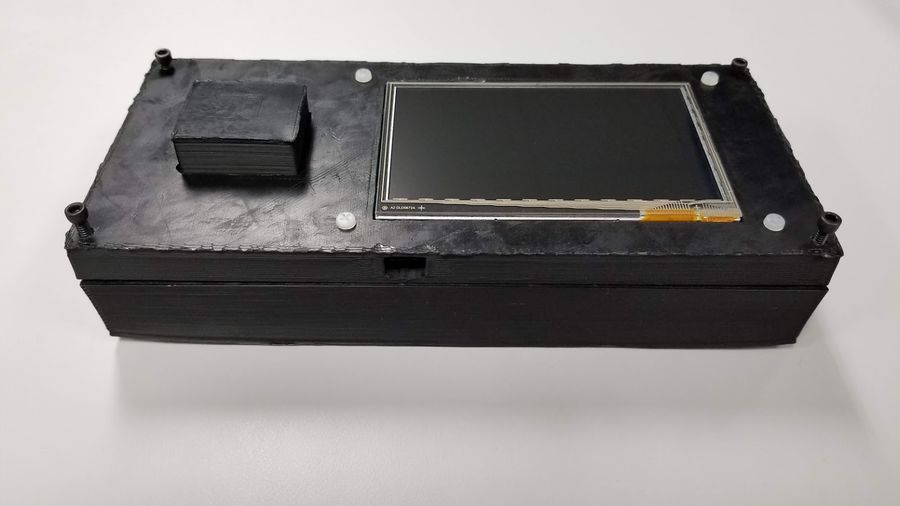 Since the main goal of the project was simply a point-of-care prototype model, there numerous avenues to expand on with additional elements. One of the next implementations, talked about in previous sections such as in “Thermal Sensor”, is heating capabilities. Ideally, a resistive heater in a custom flex circuit would be wrapped around the inner lining of the cuvette holder. The material used for 3D printings, HIPS filament, doesn’t start warping until 100° C, so the prototype could handle the temperature increase.
The capabilities of the device could also be increased with additional sensors. A 2D temperature sensor or thermal camera would allow analysis of temperature distribution throughout the sample. Additional lasers and attuned photodiodes would allow multi-spectral analysis. One point of repeated enquiry during development revolved around potential flow-through configurations. This would allow a device for remote monitoring and water-management. As the existing sensor implementation does not put anything above or below the cuvette cavity, this would be easy to implement using the developed components.