CSC rear drive is a project to modify the drive system of a Ski-Doo Snowmobile currently used by the University of Idaho Clean Snowmobile Challenge Project. The goal of this project is to relocate the drive axle and wheels from the front end of the snowmobile track to the back end of the snowmobile track. It is believed that this configuration will increase efficiency and power output of the snowmobile; a portion of this project will be dedicated to testing the veracity of this hypothesis. This project is generously sponsored by the National Institute for Advanced Transportation Technology (NIATT) at the University of Idaho through the CSC team. Our design work resulted in fuel saving of 3% while reducing the overall weight by 5 lbs.

There are approximately 34,000 transtibial amputations performed each year in the United States. The causes of these amputations range from infection to tumors with the most prevalent causes being diabetes and severe traumatic injury. Patients with transtibial amputations that wish to use a prosthetic leg must wear a prosthetic liner that protects their skin from the rough prosthetic leg materials and helps suspend their leg in the prosthetic. Prosthetic liners can be difficult to don, especially for patients with limitations in flexibility, hand dexterity, or vision. Our goal is to create a donning system that will overcome many of these difficulties by ensuring that the liner sits flush against the limb,properly aligns the pin into the prosthetic, and enables those with low hand dexterity, vision, or flexibility to don their liner independently.

Other Modify GUI to show output from modules and display them in a useful manner for the future development of games.

Geothermal heat pumps are great alternatives for heating systems in many cases. Although they have high initial costs, they are able to operate with efficiencies in excess of one hundred percent. This generally allows for a 5-10 year payback period. Heat pumps can also work in reverse, which means that during the summer months, they can be used for cooling. They work by taking advantage of the grounds' relatively constant temperature, which is the winter, is warmer than the outside air, and in the summer is colder than the outside air. This is a fairly sustainable resource, and requires only a fraction of the energy costs of traditional systems.

The Barn’s roof area was calculated to be around 180 square meters, which is enough space to hold up to 100 solar panels and produce approximately 50 kWh per day. According to solar-estimate.org, the size of the solar system required to produce 50 kWh per day in Cascade, Idaho ranges between 10.58 kW and 15.88 kW and takes up around 130 square meters of roof space. When built, the roof was designed for future mounting of solar panels. As a result, the roof has been oriented towards the South and is built to hold the weight of solar panels. It is oriented at a 35 degree angle which is the optimal angle for optimized year round power production at the geographic location. 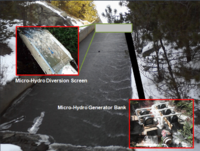 The spillway, located on the southeast edge of Horsethief Reservoir, was measured for both flow and head during a visit to the reservoir. We found that the spillway has 30 feet of head and has a flow of ~1100 gallons-per-minute.

Based on models collected from various wind power companies, it is believed that wind may be lacking in the area. However, a wind turbine would serve as an excellent educational tool for camp participants. By using a small wind turbine for demonstration, the option of teaching how wind energy is harnessed and even why it might not be a viable option at the camp would be largely beneficial.

Opportunities for teaching camp participants about wind energy include but are not limited to the following: 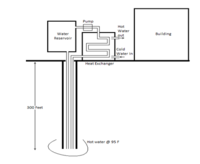 As a result of the hot water spot found when drilling in 2006, a geothermal well near The Barn (if required) can serve as a local resource to aid in producing hot water during peak hours when the kitchen and showers are in use.

Biomass is one of the abundant resources available to the YMCA camp. The 400-acre camp is constantly maintaining its forests and collecting a large amount of tree trimmings. These trimmings can be used as a source of fuel with a biomass gasifier.

While using biomass to generate electricity is a very viable option, using it to heat water instead will address some major problems relevant to the building’s load profile and lower the camp’s demand charges. These heaters are tank-less and consume large amount of electricity during shower-hours at specific day times. This is a prominent cause of the high demand charges of the building.

Due to insufficient funding, the ideas presented were not able to be installed this year. However, in order to demonstrate the validity of this system, a micro-scale model was designed. This design is an educational tool that can be used to reach out to children participating in the YMCA camp. It provides both visual and hand’s on components that exhibit functionality for hydro, solar, and wind generation.

To begin, a rough, approximate terrain was constructed out of fiber glass. The terrain was modeled based off of a topographical map and was then made to look like the environment surrounding the YMCA camp. This provides an “overhead” view of the region

The tools installed on the terrain model are used to provide insight on several of the power generation ideas presented. A solar panel was mounted onto the terrain model in order to demonstrate the idea of harnessing the sun’s natural energy. Even though wind power was not dependable for generation, a small turbine was installed onto the terrain model for demonstration. A water tower was also installed to demonstrate how power is generated through hydro. The geothermal and biofuels were not installed on the model as it would be difficult to safely operate such components and the “hands on” experience would be dissolved. These three components are then integrated together to an Arduino micro-controller providing digital display of power data from both solar and wind generation. The system also used a hydro sensor to display changes in water levels which is then interpreted to increasing or decreasing power generation. All data is easily displayed in Microsoft Excel. Another visual tool that was added consists of several LED displays. Based on certain amounts of power generation, the LEDs light up accordingly. The goal of this is to use the power generated by these renewable sources and show students some of the advantages and disadvantages of these technologies.

This section will document any work which contributes to the final design. This will include prioritizing design functionalities using a design matrix, preliminary testing of concepts, design/testing of prototypes. The below is only an example, the order/completeness may of course be modified as needed.

Consider including an initial system diagram (could be a sketch) which shows initial organization/understanding of subsystems.

The three piece design has one main piece and two side pieces. The main piece is larger and holds the robot as well as the electronic equipment below the robot platform. The two side pieces hang on opposite sides of the central piece. The sides are attached as shown with the bolt holding it.As with other designs the doors are wire mesh with polycarbonate sides for viewing.The design is simple and uses fewer parts. Fewer parts make disassembling and regular maintenance easy. 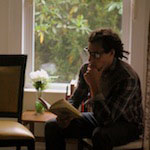 Hobbies/Interests: My professional interests have always been geared towards helping people and making a difference, and thus I have been interested in the bio-med and bioengineering fields. In my free time I enjoy several board sports, including snowboarding, wake surfing and longboarding. Along with this I am an avid rock climber.

Plan for Future: I don’t have a set plan for what I will do after college, but at this point am determined to pass the PE exam as soon as possible.

Intersests include building and programing computer systems. Designing applications for implementation on microcontrollers and FPGA's. Ultimately would like to get into building and designing prosthetics or new medical technologies. Also spend time cooking, playing baseball and target shooting. 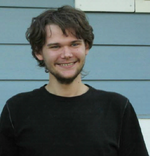 My future goals are to go into Biomedical Engineering. 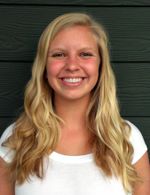 Hobbies/Interests: My professional interests center around the application of ergonomics in engineering, I apply this at my current internship working on the Advanced Accessible Pedestrian System. At the University of Idaho, I am a member of the Concrete Canoe Club in addition to being the president of the Agricultural and Biological Engineering Club and the secretary/fundraising chair to the Civil Engineering Club. In my spare time, I enjoy reading, cooking, and playing tennis.

Plan for the future: Eventually, I would love to have an engineering career focusing on how medical devices can be more functional for the user. 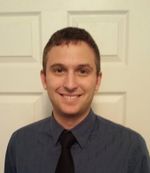 Hobbies and interests: My academic interests include robotics and fluid dynamics. I have taken multiple classes that relate to these topics including Robotic Kinematics, Control Systems, and Computational Fluid Dynamics. I also enjoy running, cooking and watching my hometown basketball team, the Gonzaga Bulldogs.

Plan for the future: After graduation I intend on pursuing a career in robotics. My ideal location would be somewhere in the Pacific Northwest. Wherever I end up, I plan on making a positive difference in peoples lives.

Rows - Pixels that run from one side of the street to another perpendicular to the flow of traffic.

Columns - Pixels that run up and down the street parallel to the flow of traffic.

Background - A frame recording the unmoving parts of the scene.

Current Frame - The frame being used to extract foreground objects.

Pixel Fill - The portion of a pixels shade that can be attributed to a foreground object.

Delta Cap - The maximum amount of change than can be applied to the background due to a new frame.

Delta Breach - When a current frame pixel is more than one Delta Cap away from the corresponding background pixel.

Foreground Threshold - The minimum difference between background and current frame pixels to register a foreground pixel.

Tripwire - A row of pixels that is being monitored for foreground pixels.