The goal of this project is to measure low temperature diffuse plumes using the fundamentals of acoustics to determine a 2D map of the temperatures of the plumes. These temperatures will allow for the determination of the heat flux and the study of unique chemo-synthetic microbes which call these plumes home.

Mid-Ocean spreading ridges have hydro-thermal vents which produce two types of heated plumes. The first is a dark plume which cannot be effectively measured by our method due to an abundance of material in the plume. The second type which we will be analyzing is a clear plume which produces heated water vents with little to no material in the plume and can be measured using acoustic vibration across a 1X1 meter distance.

As the mid-ocean ridge vent spreads heated water pockets find ways to the surface and generate an abundance of heat for a variety of life to exist. As the sub-surface processes change over time conditions for life change. This temperature and sub-surface process relationship is dynamic and what this project intends to study.

This project has been worked on in the past by Brady Hislop and he is now the team leader for the U of I senior capstone project. The frame that is currently being used to test is shown below. 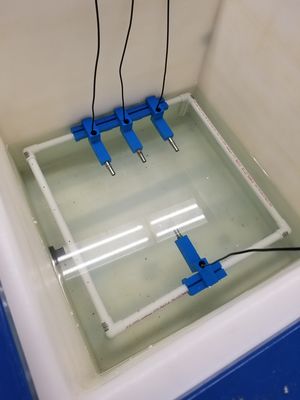 This frame has been used along with 3D printed parts to align and test transducers for send/receive (TX/RX) functionality. With enough RX/TX transducers an accurate mapping of the the temperature of the mid-ocean spreading ridge thermal vents.

The goal is to deliver a working proof of concept of a system that is capable of generating a sub-surface pulse and receiving it on the opposing side of an array. This will result in a measurable time difference between the signal being generated and the signal received. Using this time difference the temperature of the mid-ocean ridge vents can be recorded over time.

For the proof of concept phase this will not be submerged more than several meters in a controlled environment. Using a heated water pumping source and a water tank measurements will be taken to determine if the delivered system is able to preform as expected.

For this project we were asked to meet the following specifications:

This project is focused on proving the concept that sending and receiving signals from transducers can be used to determine the temperature of hydrothermal vents near mid-ocean ridges. For this design project we will focus on creating a system that can work in a pool under controlled conditions. Additionally, considerations will be made for the frequency of the transducers, the speed at which signals can be sent and received and the rigidness of the frame.

Transducer Beam widths: We learned that the theory on the transducer beam widths is close to experimental results that we obtained in the lab. This allowed us to have the goal of creating an array of transducers that could be receiving the signal from the corners of the frame. 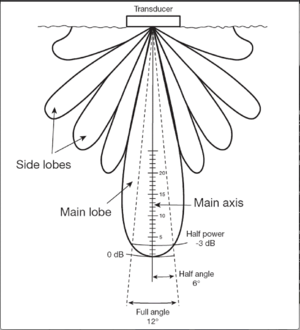 Prototyping of Transducer Holders: Through the prototyping of parts, we learned a few important things. The first thing that we learned was that Plastic seems to be more difficult to machine then aluminum so early next week we plan on attempting to machine a piece of aluminum to determine if this makes the machining of the holders quicker next semester. We also learned that there is a need to better our design to ensure that the alignment of the transducers is within the wanted threshold.

Sound Propagation: When pulsing transducers in a holder the sound often times propagates through the frame creating unwanted signals in the receiving transducer. We learned that in order to avoid this from happening a rubber gasket is needed to ensure that the wave does not propagate through the frame. Further learning will provide us with the knowledge to understand if we will be able to solve the problem of the propagation of sound with a rubber gasket of if something more needs to be done. 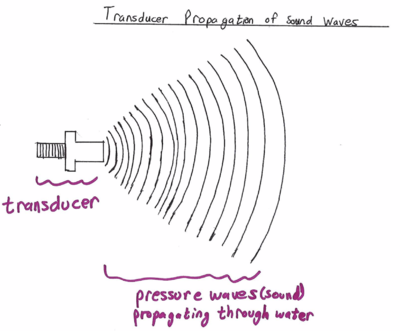 Propagation of Sound from Transducer 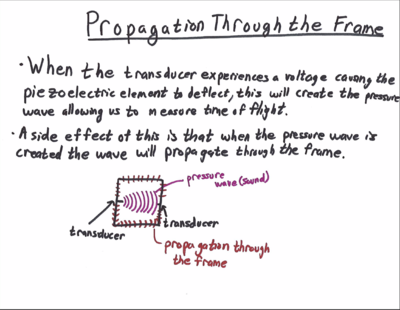 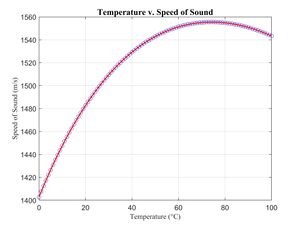 Grid Resolution: Creating a grid system and determining the resolution was an important aspect in the design of the configuration. For a grid system, each individual grid had to have at least one transducer signal crossing. The signal emitted and received only measures the average time of flight for the signal. A better estimation for the temperature to be mapped is by having more intersections within a tighter grid system. The grid side lengths are the resolution of the grids, and it is preferred to have a smaller resolution size. We used the resolution size with the area being read in order to determine the best configuration to attach the signal sending and receiving transducers to the frame. 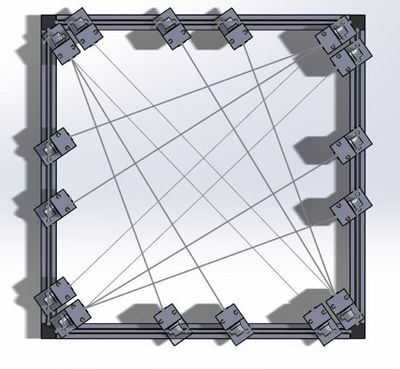 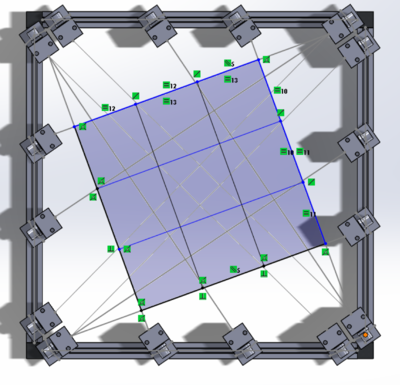 Load Matching With amplifiers, especially in high frequencies, load matching is crucial to get the necessary power to the load. With our load of transducers, we ideally would want 200VRMS with no current going to the load. However, with the transducers being capacitive, we will have very high current at these voltages. Because of this, we needed to figure out a way to maximize voltage while keeping the current in check so that the transducers were not damaged. To do this, I solved for the power needed at the load and back-solved for the load impedance that we needed to match the load to this power. After getting the appropriate power, I then needed to add this load impedance in a way that maximized voltage across the load. To do this, I placed small resistance in parallel with the transducer. This also minimized the voltage lost in the line. 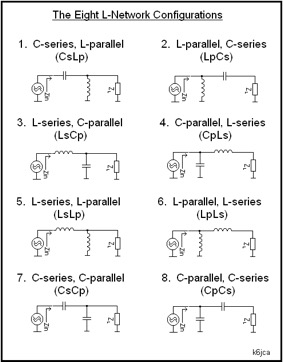 PIC32 Coding Although we had already done a lot of the coding for the PIC32 in a previous class, there were a few things that I needed to learn on my own, such as using several AD converters at once or in sequence in such a way that we could read several incoming signals within one second. I also needed to figure out a way to synchronize timing between PIC32s in case of data overload. 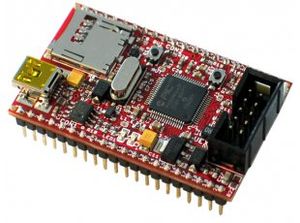 PIC32 Board being used to pulse signals

Circuit Behavior In addition to the load matching, I learned about what kind of components work and don’t work for our application. Specifically, we needed to find a way to turn the 200VRMS output on and off quickly enough to take all of our readings. We had originally though of using a MOSFET but we found that part of the signal would still leak through. We then tried building a thyristor out of FETs which also let some of the signal leak through. We eventually decided on a relay that could block the entire signal, even though it would operate more slowly than a FET. 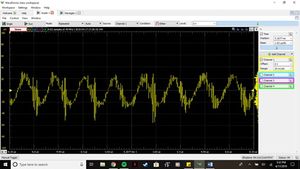 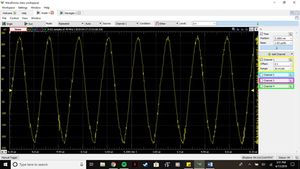 Transducers I learned about how piezoelectric transducers and crystals work in general. I also learned about the relationship between operating frequency and output integrity, as well as the equivalent electrical circuit to model how transducers operate electronically. The Butterworth-Van Dyke model of a capacitor with an RLC branch is what I found to be the most accurate. I also learned how capacitance can change in transducers based on frequency and whether they are clamped in place or not.

Transducer used in the system

For the final design we decided to go with the following components and configurations. 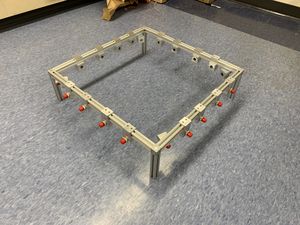 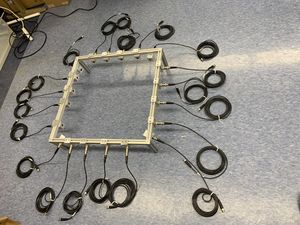 Possible configuration of Transducers with wires 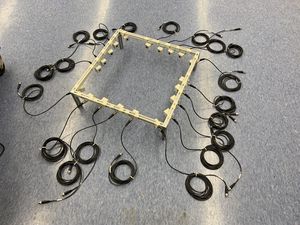 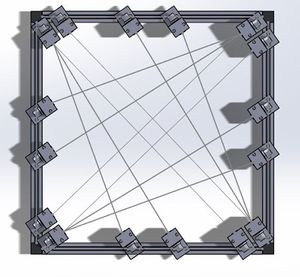 Example of Average of time of flights