The Vandal Marching Band is well-known for their rousing halftime shows that bolster school spirit and provide memorable entertainment at sporting events as well as other activities. This project continues a multi-year collaboration with the College of Engineering in creating awe-inspiring technological platforms and innovations that add an extra level of intrigue to their performances. This year’s updates include four independent omni-wheels with next-generation lithium battery energy storage and robust power electronics/controls. The final platform should be easily reconfigurable for multiple instrument and lighting set-ups.

Previous iterations of this project include the following:

Our most updated design can be seen below. It features an aluminum frame connecting four omni-wheels, which each have a unique battery and control system. The frame is topped with plywood to create a versatile mounting surface for instruments.

We have manufactured and assembled the majority of the platform, as can be seen in the Implementation column below. We have yet to select and add the wooden portions of the platform, and we are still in the design phase for the battery box (which will be mounted onto the plywood) and the lighting system.

Overview
The drivetrain system connects the wheel subassembly to the frame and allows the platform to move.

Deliverables
The drivetrain subsystem must allow movement to the wheels which moves the platform in a safe manner. It must also be properly secured to the frame to allow said movement.

Development
We adopted parts from the previous year’s team. These parts included the wheel subassembly and gear motors. Thr drivetrain subsystem has not changed since last year’s team had it, but we did have to change things to fit our new platform design. Bearing blocks needed to be remanufactured to fit the new platform and gear motor mounts were manufactured to fasten the motor to the gusset plates of the frame.

Current Status
The assembly has been completed and was delivered to the ECE team for circuit testing.

Overview
The lighting subsystem involves LEDs which can be mounted to the platform frame or to instruments in a variety of ways, in order to draw attention to the entire platform during shows. It also involves a microcontroller that will be controlling the LEDs and will be remote-operable.

Deliverables
The Marching Band will have an easy-to-use, flexible lighting system, with multiple hardware and layout alternatives. Limited technical skills should be required to operate, troubleshoot, or adjust the system. This lighting will make the platform visible at any point in the Kibbie Dome, will be remote-controlled, and will be operable for the duration of the Marching Band’s performances.

Development
While a few previous platform teams did include lighting features, this year’s design does not draw on their efforts or designs and is largely a novel element. Previous iterations (namely from 2015 to 2017, see above) included a piano frame with LED lights built inside. The development of this year’s lighting is under the mentorship of Dr. Bob Rinker and Grae Foster. This subsystem requires significant electrical work, which is not an expertise of any of the primary team members, so this mentorship has been invaluable, and the electrical requirements a great area of project learning.

The initial focus of design was on developing software for a couple static hardware configurations that could optionally be changed down the road. We developed plans for two of these configurations (shown below in “Photos”): one with high-powered, spotlight-style LEDs mounted to poles that would screw into the platform frame, and which would use fire extinguishers as fog machines; the other with thick strips of LEDs which would wrap around the base of the platform frame. In both cases, these would be controlled with an Arduino.

After further consideration and discussion with stakeholders, we shifted our focus to creating a system that is more open-ended on the hardware side (simple, able to be implemented anywhere and changed around quite easily), and more structured on the software side. We decided to develop several light “shows” with a single hardware setup, as well as an API to increase the ease of switching between these and creating new ones.

Instead of the previous light choices, we opted for the Adafruit RGB NeoPixels, which require a current of approximately 2A per meter and an overall voltage of 5V. These are easily individually controlled, and have many custom libraries already built. Previous projects involving the Marching Band have implemented these lights. Additionally, we selected an Adafruit Feather M0 development board rather than one of the Arduino boards, though they both use ATmega microcontrollers. The M0 is more powerful, and uses separate DMA chips to control the lighting strips, which provides the ability to control numerous independent strips. This is enhanced by the additional use of the “Feather Wing”, an extension to the Feather board.

Current Status
The current design involves a series of NeoPixel strips in quantities sufficient to surround the platform. The strips will be easily-adjustable, so that they can be mounted to the platform, to instruments on the platform, or whatever other mount is desired. They will be controlled by an ATmega32u4 and powered by the main platform batteries.

We have set up a prototype with a single microprocessor, small battery pack, and one meter of NeoPixels. This is being used to test the visibility of the lights in the Kibbie Dome and to experiment with various software designs via the Arduino IDE.

Deliverables
The members are joined using gusset plates and pop rivets. The frame should be flexible enough to allow for the wheel assemblies to touch the ground but strong enough for the support and movement of the performers.

Development
The platform was originally designed with the intention of using U-channel members. After the initial design review, it was decided that using square tubing would be preferable. Aluminum tubing was chosen for it’s light, and strong properties. The members would also allow for fast and easy assembly. The tubing was originally designed to be welded together, but the decision to rivet was made. Gusset plates were then designed to hold all members together.

Current Status
This assembly has been completed and the wheel assemblies have been mounted to the frame.

Overview
The battery box is the containment device for the power of the platform. It holds each battery cell in place to ensure that all the batteries are in contact with one another, which will create a steady voltage and battery stress across all cells resulting in a constant power supply.

The battery directly interacts with the Battery Monitoring System (BMS), but it also influences the entire platform's functionality. The battery is controlled by the BMS, and power runs to the motor controller and motor; at the same time, the battery provides power for the BMS and microcontroller. Physically the battery box is located on the top of the platform.

Deliverables
The battery box holds each battery cell in place, so they are not knocked around and damaged. It will have to be compact--around 1 cubic foot--and one box will be located at each corner of the platform. The batteries will be contained by a compression fit due to reasons explained later. The whole box must be functional as well as aesthetic as it will be on the deck and visible.

Development
We were planning to use completely new batteries--selected by the Spring-Fall electrical team--so the containment device had to be completely different as well. We were originally going to be spot welding all the batteries which would make a nice compact block (Version 1, below).

This idea was thrown out the window when the team building the battery realized that the spot welder that they bought could not actually spot weld the material being used. This called for a compression fit, which is considered inferior. Thus, in the second iteration, we created individual cylindrical tubes that attached each group of cells in parallel to account for the Amp-hours (Ah) needed. Then each cylindrical block would be connected in series to get to the desired voltage. Prototypes were made (Versions 2-4), but during the finalization process we realized it was much too big and expensive to continue.

Current Status
As it stands the battery box is still in the design/prototyping phase. With the previous iterations being too large and expensive we are looking into simpler and more cost effective ways to solve this problem. See Version 5, below, for the newest prototyped version. We will also consider an option using a 3-inch tube and are working on figuring out how to get constant pressure on each battery. The ECE team was able to do some initial testing using a jury-rigged battery containment device.

Validation
The ECE team was able to perform a basic test on the controller by using their improvised battery cell to make sure the controls work. We also did some initial prototype testing to make sure the cylindrical cell holder would contain the batteries snuggly, which they did. When the 3D modeled battery pack was placed onto the 3D modeled platform we realized how big they really were which resulted in a decision to try something new. 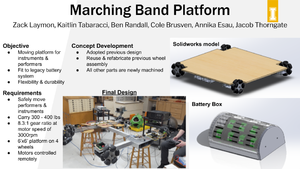