The University of Idaho Marching Band will have a new addition to their halftime performances from this point forward, musical triangles. The Mechanical Engineering Capstone group, Pressure Angles has designed and manufactured musical triangles for each band member which feature flashing lights coming from our thoughtfully designed handle that will light up upon being struck. This project incorporates the design, manufacturing, and fabrication of: jigs, musical triangles, chimes, handles with internal circuitry and LEDs, and a sling allowing each band member to keep this rhythmic surprise hidden until they are ready light up the stadium.

The Marching Band has been featured with many capstone projects like the Bandbeesten for many years. But this year, 2019 the Marching Band director Spencer Martin had the idea of bringing the musical triangle back to life. Musical triangles aren't new to the marching band, but their high cost made it difficult to justify implementing them with each member of the band.

The triangles were decided to be made out of constructional rebar to cut cost without sacrificing sound. Mr. Martin wanted the triangles to have some flair so he envisioned a triangle that would have lights that would flash upon hitting the triangle with the chime. To house the electronics and protect them Pressure Angles decided to design a handle for the triangles that would incorporate an ergonomic fit, all of the necessary electronics. Working with Dr. Robert Rinker, Associate Professor and Associate Chair of the Computer Science Department we were able to receive guidance with prototyping the electrical components that go into creating this light emitting response.

With the help and guidance of Dr. Matthew Swenson, Dr. Edwin Odom, Dr. Steven Beyerlein, and Graduate Student Selso Gallegos we were able to develop the handle design to meet all criteria Spencer had in mind while remaining sleek and robust. With the help of the advisers above and machine shop manager Bill Magnie our team was able to developer a jig to create consistently sized triangles to make sure each sounded the same.

The Band Department, led by Spencer Martin, asked the Mechanical Engineering Department to create musical triangles for each band member. The triangles themselves are made out of rebar, and will be held with our custom handles specially designed to house a battery, LEDs, and a sensor that can pick up vibration from contact with the chime to signal the lights to turn on. It is important that each band member can remove and stow the triangle and its components swiftly during performances.

By the end of the project Pressure Angles will have designed, manufactured, and fabricated 150 triangle packages. Each package consists of a triangle, handle with functioning electronics, chime, and a holster for everything to fit in. 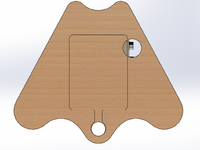 We decide early on that laser cutting wood would be the best way to get quality handles that could be massed produced. This first design we came up with had the idea of using three fingers to hold with housing for the battery and circuitry. The circuitry would have surface mounted LED lights on the front of the circuit board. During a meeting with Spencer Martin (director of the marching band) he gave us these pros and cons. 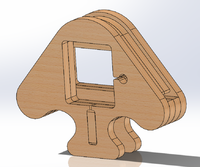 Handle Design 3 with Side mounted lights and pinch grip 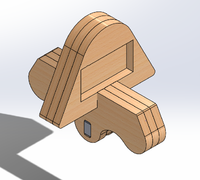 Design 3 features ideas of LED light strip instead of surface mounted lights along with a new secure grip and using a press fit with a hole for the connector to fit the correct direction. Design 4 was made as an idea so the LED lights could still be surface mounted to give options to Dr. Bob Rinker who was making the circuitry. After meeting with Bob Rinker, Matt Swenson, and Spencer Martin they gave us these pros and cons.

After our meetings the base outline of design 3 was chosen to improve upon by.

After design 5 was made we discovered that the circuit could not be put in whole so one more modification was made to remove a section of the middle plate. So entire Circuit could be implanted to fully assembled handle.

In the final design came from how to attach sensor to the triangle this was to be done with a magnet glued to sensor and attached to the triangle. There was also one magnet attached to the Triangle in order to store the piezo. This made the handle removable but it severely damped the sound. So the sensor was moved to be on the striker. The final addition was to add a second magnet on the handle so the Striker could be stored on the handle.

Striker assembly with mount for handle

Initially this was to be the simple most straight forward part of the project it was decided early that a magnet was going to be used to attach the sensor to the triangle. This should have been tested early on in the project. When the sensor was attached the sound was severely dampened to the point of very limited sound. This was not discovered until the last week of the dead line. The solution was to move the Sensor to the Striker and use magnets to attach the striker to the handle. Using glue to do this did not stick well to the Stainless steel so clip where made using a 3D printer to give a better surface for gluing.
The biggest problem we have is the steel rods we ordered are not magnetic we got alloy 303 when we needed 304 or 316 this sets us back in making all the strikers but using www.midweststeelsupply.com cut parts can be ordered. 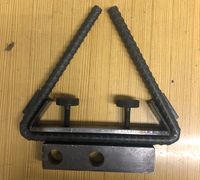 The dimensions of the triangle are key to the sound the first diminutions used for the triangle were 7.35” sides this ended up being too large and hard to reproduce. So in order to make them repeatable the sides were down sized to 7.16”. This did not affect sound quality and made them easier to make. an important piece of this is to be able to manufacture the same triangle 150 times. To do this constant improvements are being made to the jig in order for it to be Consistent. we started with a simple just just to bend the rebar around this worked to make a constant length but the rebar would slide around. to fix this thumb screws were added to hold it in place. then stoppers where put into place to get the correct angle. 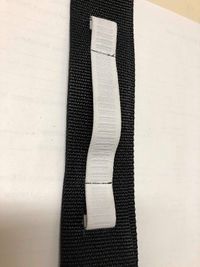 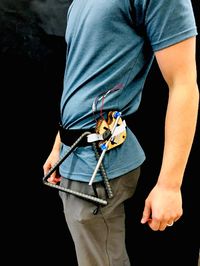 In this final design, we used an elastic material for the triangle leg to slide into, and the handle is held in from the pressure of the elastic being stretched. We found this prevented the triangle from moving during use, and was very simple to sew, which was desirable because we are making 150 belts. 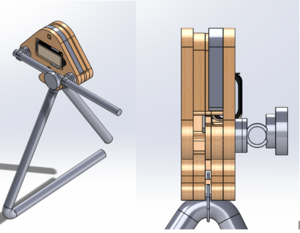 The final product is an assembly of three different assembly’s and two parts being:

The product features assembly’s that are easily putt together for fast manufacturing while being simple enough it can be taught to anyone. The handle is designed to be able to take some impact and still function by housing all electronics in the handle. The sensor is also connected in a way using a magnet that the sensor will disconnect when dropped instead of breaking the wires. The switch is positioned on the circuit board so it is easily accessible even with gloves on. All of the assembly fit snugly in the belt with an easy two step access to surprise the audience quickly and effectively. When not in use all parts can be stored separately until next use.
File:Speifcatons of final assembly .pdf