The goal of the project is develop Bluetooth technology that can communicate wirelessly with 2 or more conductivity probes to measure small stream velocity. With the readout of the probes, probe settings, and software be accessible from a tablet or smart phone. 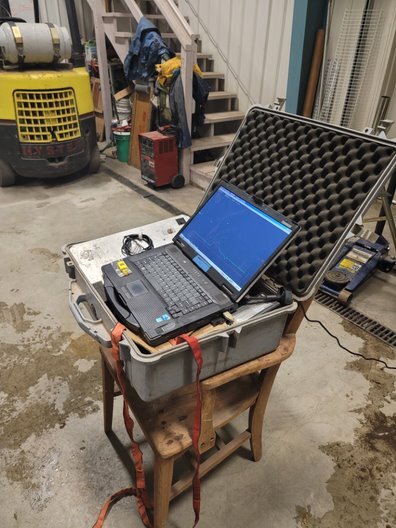 Measuring velocity in large stream channels have use a variety of successful means from current meter to acoustic devices. However these instruments do not work well in narrow, shallow, steep stream channels. For these shallow small streams various methods have been used. The simplest method uses a tennis ball or equivalent that is timed over a set distance. Small current meter are used but sometime are only partially submerged thus do not provide reliable measurements.

We currently use two conductivity probes connect with wires to microprocessor and a laptop computer. A salt solution is added to the water and salt solution pulse measured as it passes by the two probes which are separated by a set distance (2-4 meter). We use software to read and graphically-observe the microvolts readings of the conductivity probes which is related to the salt concentration. This technique has been successful on small streams and even shallow rill flow on hillslopes.

There are three main areas of design, the circuit, the app, and the housing. The probe circuit will take the measurements, and do all the calculations before sending the data to the app. The app will receive the data from the circuit and have a user interface so the data can easily be read in real time. The probe housing will hold the circuit and must be waterproof and durable.

In the final assembly, you can see that the electronics are now attached to the cap, and can be easily inserted into the handle of the probe housing. The guard on the end of the extendable rod was also lengthened because the probes stuck out further than anticipated. The excess wire unfortunately must be wrapped on the outside of the housing because we were unable to get a reel system working in time.

The biggest challenge that we faced in this project was designing a reel system for the wire to spool up nicely when the extendable rod gets collapsed. Our first idea was to just have the wire bunch up on itself in the excess space in the handle, but the pin got in the way so the wire just bunched up in the extendable rod and got the entire rod stuck. Our second idea was to design and 3D print a fishing reel type contraption, but we also had problems with this design. The main problem with this design was that the wire would catch on the spool and then get the reel jammed. We also had problems with the wire twisting and making it impossible to reel any further. Our main problem with designing the reel was the space constraint inside the handle and reducer, and that we were also running out of time to work on the project.

In future iterations of this project, here are some of the recommendations of things that we think should change or be added:
Have the circuitry have its own housing inside the handle.

Have wires be more easily attachable/detachable from the circuit board