The goal of this project was to create a lightweight riflescope mount (Ultramount) that is comparable in strength and production cost to an existing model made by Nightforce. To do this, a two component method was pursued. First, a force simulation acting on the mount backed up by live fire data and a comprehensive math model, was used to pinpoint high stress regions within the Ultramount, and optimized the geometry for weight reduction purposes. This simulation was then used to create several designs, which were 3D printed, and validated using displacement test methods. Second, an investigation into better materials for Ultramount fabrication was conducted to compliment the new design. Combining aspects between mechanical design and simulation, along with optimal material selection, an ideal riflescope mount could be fabricated.

Nightforce desires an in-depth analysis of the economic and material optimality of their Ultramount riflescope. They requested the development of a lightweight model that would meet or exceed current Ultramount specifications, in addition to maintaining current production costs. The client specified their current model’s alloy used for production, in addition to strength, spatial, mass, and durability requirements at the first team/client meeting. Military-specifications, previous live-fire testing, etc. were also discussed. Required files were given to the team to begin work on the simulation of the mount.

• Create a force testing math model, that would accurately summarize the rapid impulse effects on the dynamic forces acting on the mount.

• Present a proof of the aforementioned math model in the form of a proof of concept, in which a simple geometry will have a rapid force applied to it

• Implement math model into mount design, and use for geometric optimization. Ideally, this will be used for not only the Ultramount, but for other products in the future

• Provide design details, procedure, and conclusions in a concise research document for review by sponsors and the University of Idaho

The new prototype mount was qualified upon the following specs, followed by how we plan to meet the specification

♦ Material design will be limited by a materials corrosion rate. For a material to qualify, it must be able to have a hard-anodizing coat to the same standards (MIL-A 8625) as the current Ultramount

• Capable of surviving within a temperature range between –40 – 225 °F

♦ Disqualify any low melting point materials such as low-end polymer.

• Capable of surviving recoil of 10,000 rounds on a corresponding rifle

♦ No simulated stress will be allowed within a close range (~35 ksi) of yield stress for a given material. Design and material selection will be kept to such a standard as to meet or improve upon Ultramount capabilities

♦ Qualified by sponsor approval and subjective recommendations, if our customer finds it to match their current design profile, then visual appeal is considered confirmed

• Will maintain position after a standard 5-foot drop test.

♦ New prototypes will be mounted to the rail and dropped 5 feet. If position and adjustments remain unshifted, then our design is validated

♦ Through implementation of known densities of materials, the final design aim will be 50% weight reduction, but validation will be anything less than the Ultramount's current mass

♦ Material and production cost will be scrutinized thoroughly throughout the design process, and final dollar values for production of mounts using selected materials will be provided for comparison by Nightforce

A materials candidacy study was conducted based upon the above specs. Metal alloys, polymers, and composites were all considered. Polymers, while lightweight and strong in some cases, would fail in terms of cost effectivity and optimal temperature range. This eliminated all but carbon fiber reinforced polymers. Other composites considered were glass fiber reinforced polymers. Over 50 Al-alloys were examined for comparable properties, but only a handful possessed the strength and low density to continue in the selection process. Magnesium and Titanium alloys were also considered. After checking the corrosion resistance, and temperature range, each material was indexed according to its Young’s modulus (E), yield strength, cost per unit volume, and density. The results and most attractive candidates based upon the indexes were shared with the client and team, allowing for further steps to be taken in acquiring quotes for the various materials and taking note of the bulk price for each material.

Over the course of the winter, over 15 companies were quoted for material prices, which provide the range of values given below.

The large range for magnesium alloys is due to national and international trade. Lower prices can be obtained internationally for AZ61A, but due to increased border cautions due to spreading illness, it was not purchased. All pricing given above has shipping,handling, and import cost accounted for.

Finally, a validation study for corrosion and hard coating of materials was performed. Al-7068 would hard coat quite similarly to that of 7075, 2024 would have issues hard coating due to its high copper content (3-4 wt%), and Mg-AZ61A has hard coating capability, but would result in a thinner coat overall, and would be less effective. Salt spray testing to MIL-A 8625 specifications would need to be performed on hard coated Mg-alloy prototypes in order to validate this for future use. Hard coating any of these alloys in bulk (4000+ parts) would fall in the ball park of $500/batch.

Math Model and Proof of Concept[edit]

To prove the governing principle was an accurate way of modeling a gunshot we constructed an impact test stand to simulate a gunshot. It is a 1x1x1 ft. cube frame that holds an aluminum bar as the dummy gun and has a swinging mass attached. The objective was to simulate a gunshot so the impact between the swinging mass and the dummy gun was observed. Shown in the picture of the PoC in project learning, there is an accelerometer attached to the bar to measure the reaction or change in momentum from the impact of the swinging mass. The accelerometer used is an ADXL335 triaxial accelerometer from Sparkfun and an Arduino Mega 2560 to capture the data. The mass was swung at a \theta=25˚ from the vertical. From the simple pendulum equation,

After 80 live fire recordings, accumulating 1.6-1.92 million points of acceleration and force data on the front and rear of the rifle scope mount and rail, peak forces were taken from each shot, and applied into modeling software to predict where high stress regions may occur in the mount. Based on this, a worst possible scenario simulation was ran, enacting the highest stresses upon the mount. This yielded peak stresses on our mount that were several times that of the yield stress of Al-7075, which meant it should have catastrophically failed upon every shot of the rifle. To remedy this, we used the average of the top 20 recorded points around the peak, and that reduced our stress to more realistic values, that are shown in the table.

Below is the finite element analysis base assumption used to apply force in the simulated scope (assuming clamping points as fixed positions). 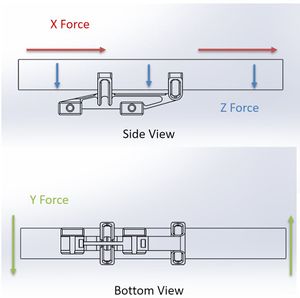 We used a Dytran 3313 3-axis accelerometer for data collection. This 3-axis accelerometer is well suited to collect data from a gunshot. With a shock value of 5000 g’s and a peak of 7000 g’s. The accelerations from the rifle were well below the threshold. The DAQ for these tests was upgraded to the Vibration Research ObserVR 1000. The ObserVR came also with its own software to record the data. The software allowed exportation of the data as .csv files making the complete setup very efficient.

The following designs were developed via three different approaches. They are shown in the table below.

In order to prove our assumption of a simple F=m*a relationship enacting on the mount, a proof of concept (PoC) was needed to be designed. This took several iterations, all trying to show that a short, sharp force enacting on a simple geometry would be able to relate a math model to the mount as a whole. Originally, a stool and a hammer were attached and dropped from a set height to get repeatability in results, but to get a more accurate angular velocity, and striking angle in general, a secondary box PoC was developed. Both of which are shown below.

While acquiring a realistic math model, simulation with the understanding currently known by the team was performed, changing independent parameters, with the intent of getting realistic peak strain values in the mount (≤ yield strength of the material). Through a thorough analysis, the peak stress regions were found in select regions:

• Above the front jaw, at the corner connecting the main body to the bolts

• In front of, and above the back jaw

•At sharp corners or creases in the geometry

These were optimized manually, and yielded the designs shown in the table in the Data Analysis and Prototype Design

Through live fire testing and research, the Iron Sight team has found that typical rifle shot accelerations lie at the peak around 150-210 G. To optimize the rifle scope mount our calculations showed that applying 137, 126, 93 pounds force in the X, Y, and Z axes created the most accurate simulation to represent the recoil of the FN Mk17 rifle. This yielded the peak stresses seen in the final design. In most cases a design team chooses strength or weight. Our team has produced models that stand out in both categories. To accompany these models a streamlined procedure was developed to repeat this process on any new model of rifle scope mount the client may make in the future.

The material study included a material indexing of vital properties, a material compatibility study, a hard coat anodization analysis, and a price report for top materials. The first and safer approach for material replacement would be Al 7068, as it is stronger than 7075, and could allow for more mass to be taken off the mount before yielding, which would in turn make it more lightweight. Downsides for 7068 include its high cost and lower potential mass reduction due to a higher density than 7075. The second option bears more potential for cost savings and mass reduction, at the risk of increasing costs in shipping, and in electroplating the Mg Ultramount. These risks weigh against a potential 63% mass reduction if switched over to Mg-AZ61A. For future work, investigation in CFRP may also be of interest, considering it would skip many of the processes that metals need to go through, and its prices are slowly declining over time, making it more economically friendly.

Time constraints did not allow for aluminum prototypes of the new designs to be produced and tested. However, 3D printed models were fabricated for displacement testing. Nightforce printed one copy each of the Ultramount and the three new designs. The material used was Visijet M3 Black, which is a strong and flexible plastic. Titanium hardware and aluminum ring caps were used to assemble the mounts. For testing, each model was mounted on a picatinny rail that was suspended from a hoist. A bucket of water weighing seven pounds was suspended from the front and back scope rings separately. The change in distance u between the scope rings was measured with a caliper and compared to the unloaded distance to calculate the displacement of each ring when the force was applied. The test was recreated for each mount in Solidworks simulations to validate the simulation methods used in development. The physical models showed much more displacement than the simulations, however the data both follow the same patterns. In both tests, design 3 shows the most displacement for both front and rear scope rings. This is shown in the validation table shown below