RTDS Simulation of PV Inverters in a Small Power System

The goal of the project is to develop a model of a small power system with multiple photovoltaic (PV) inverters. We will then implement external controls to coordinate real and reactive power output from the inverters.​ Finally, we will condense our findings into a lab exercise for future engineering students.​

Appropriate power system models are a necessity for effective engineering in the power field. With the rise of inverter based renewable resources, the need for accurate working models is greater than ever, both for working professionals in the field as well as the future power engineers in the classroom.

Our goal is to create a basic distribution model that incorporates photovoltaic inverters and provides a hands on look at how this technology affects larger power system stability. We will also incorporate an automation scheme that can, in real time, regulate power flow to maintain stability for our small system. Ultimately, we will package our creation into a laboratory procedure so that students after us can learn first hand about inverter based resources in a larger distribution system.

Below is a list of files that represent the deliverables we have turned in up to this point in the project.


Our team presentations can be found in the Additional Documentation section.

The model we will create will be based on the IEEE 13 bus system using a Real Time Digital Simulator (RTDS) and implemented with RSCAD software. It will incorporate three separate PV inverters with controls for each. We will also create a control scheme using an SEL Real Time Automation Controller (RTAC) to control real and reactive power output from the PV inverters based on specified grid parameters. A human-machine interface (HMI) will then be developed for real-time manipulation of the RTAC controls. When the model is working properly with the controls in place we will create a lab procedure document so future engineering students can experiment with small power systems with integrated PV inverters.

Answering the question "What will the final design look like":

One of the major considerations for our project design was which model to base it on. We had a few different choices. We could have used a model built from scratch that had any number of busses, loads, sources, etc. There were also two pre-made model options, one was the IEEE 13 bus system and the other was the IEEE 34 bus system. Ultimately we decided that since all of the team members were new to RSCAD and working with the RTDS we probably shouldn't try to build a model from scratch as it would be too time consuming. We also decided that a 34 bus system would be too complex considering the goals of the project. The IEEE 13 bus system was the model we chose to base our project on.

We also had to decide how many inverters we wanted to integrate into the system. Dr. Johnson, our client, recommended two or three. We decided to include three PV inverters. This would make the results of the simulation results variable enough to give a good idea as to how the grid behaves based on different power outputs from the inverters. It was also recommended to connect the inverters at the weakest busses. This meant finding which busses had the lowest power factor, or ratio of real power to total apparent power. We could find this by running the IEEE 13 bus system on the RTDS and finding the power factor of each bus.

For weeks the team was roadblocked while working with the PV array model from RTDS. There were some protection elements that weren't allowing the model to function as it should. We decided to go back to a base model instead of pulling the array model from a file that had it integrated into a different system. This made it easier to deconstruct the model and remove the parts that were unnecessary and causing issues. We are now close to being able to integrate three of the PV arrays on our IEEE 13 bus system. Once this is completed and communications are established between the hardware devices, an HMI can be designed to control our virtual system. 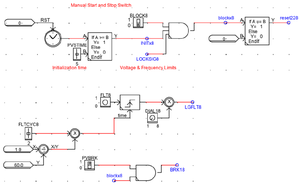 Our main need for learning at the beginning of this project was to learn how to use RSCAD to build models to run on the RTDS. There is a fairly steep learning curve for this software. After finding a PV inverter model that would be suitable for integration in the IEEE 13 bus system, we found it difficult to find how to make the system register the effects of the inverter. 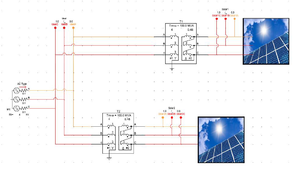 With help from our mentor from SEL, Asad Mohammad, we found that there were issues with the protection logic of the PV array model. We haven't found the root cause for this issue, but we have found that by bypassing the protection value "blockx8" we can get acceptable results from the PV inverter.

Now that the PV inverters are working properly we need to integrate them into the IEEE 13 Bus model. We decided to use a phased approach to this goal. First we made sure that we connect a single PV array to a single bus. Then we added two arrays to a bus. Since we will be using three arrays on the 13 bus system we will then add a third array to the bus. Once we have all three of these arrays working properly we will then integrate the three arrays onto the three weakest buses on the IEEE 13 bus system.

The next major step in our project will be to establish a connection to the SEL RTAC and create an HMI for manipulation of the inverter controls. We initially had issues connecting to the available RTAC but with some help from Asad we were able to establish a connection after changing some IP addresses. We then were able to connect the RTAC to the RTDS.

The Design Validation Plan can be found in the image to the right. It shows the major project requirements and how the will be tested to make sure they meet specifications. As the project progresses and certain requirements are met and tested, the table will be updated to reflect the status of the project.