The goal of this project is to integrate machine learning with the Raspberry Pi 4, leveraging the computational power of the Intel Neural Compute Stick 2 in order to get sufficient speeds to identify patches of weeds in farm plots.

Current computers suffer from being heavy and using high amounts of electricity. This prevents them from being carried by drones, which means that any sort of aerial image recognition is impossible.

With the advent of artificial intelligence, computers are now able to manage computationally-heavy tasks, such as facial recognition and self-driving vehicles. However, machine learning is typically limited by the processing speed of the computer, and is usually limited to bulky computers that are stationary or draw large amounts of power. The purpose of this project is to demonstrate the viability of machine learning on smaller machines, such as the Raspberry Pi, which could then be used for crop identification via drones. Since big computers are too heavy to be carried by a drone, the extremely light-weight Raspberry Pi would eliminate the problem of weight as well as the problem of high power draw. 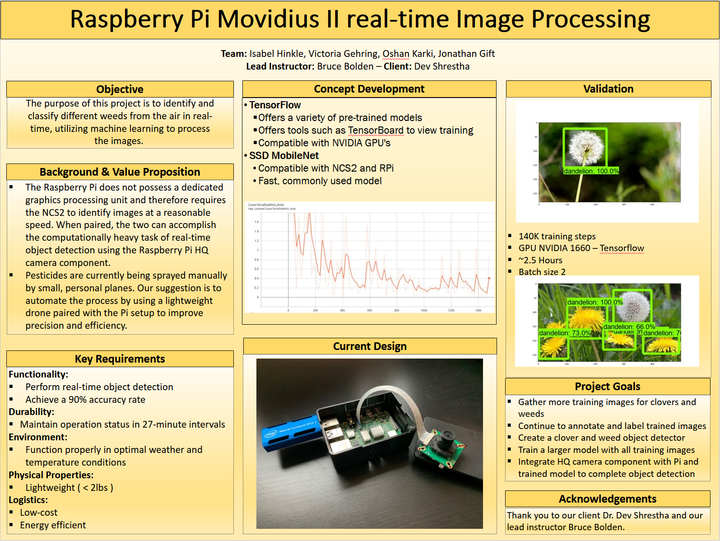 Most modern farmers use small, Kerosene-fueled airplanes to spray pesticides onto their fields. Our goal is to instead, use a small computing system atop a drone to detect weeds and trigger a spraying mechanism in order to save farmers time and money. If successful, modern farmers won’t need to use small airplanes that are dangerous, use fossil fuels, take up space, and pollute the atmosphere. Our weed spraying drone will be easier to store, cost-effective, more accurate, and require brief human interaction. This could improve the quantity as well as quality of foods. Our object detection will allow us to target exact locations that need spraying, so it will reduce the amount of toxic chemicals going into the soil. Our project will be using a raspberry pi to explore the benefits of using smaller computers to do computationally heavy tasks with computer weight limits.

This guide will walk you through the entirety of the steps we took to make this project work. Over the course of this guide, you will learn to set up TensorFlow, install Ubuntu, install the Raspbian operating system on a Raspberry Pi, train a custom machine learning model, optimize the model for the NCS2, and finally run the model on your Raspberry Pi with the help of the NCS2.

One of the biggest issues with this project was the immense dependence on 3rd-party libraries. Between TensorFlow, OpenVINO, and the Raspbian operating system, we ran into numerous dependency issues due to libraries being updated, halting development until we could find a version of the offending package that worked with the project. TensorFlow itself is the worst example of this, where the newest version of the library is actually less supported than the older versions. Our suggestion is to install the exact same versions of libraries that we have when listed, which will guarantee that the project will work for you even if the libraries are older. If exact versions cannot be found, the closer to the target version the better.

Setting up the Linux Installation[edit]

Setting up the Raspberry Pi Installation[edit]

Setting up the Model Optimizer[edit]

Hobbies/Interests: My professional interests include object detection, machine learning, and cyber security. In my free time I enjoy volleyball, camping, and PC building.

Plan for the Future: My plan is to further my understanding of machine learning and object detection to optimize and automate processes. 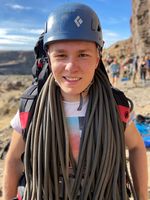 Hobbies/Interests: I enjoy working with Python and C#, and I have a significant amount of experience with both Raspberry Pi's and the Unity engine. I also like to dance, rock climb, and play guitar.

Plan for the Future: My goal is to work at Intel in Portland and eventually teach computer science someday. 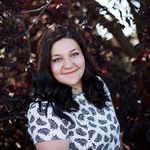 Hobbies/Interests: My professional interests include all things cybersecurity. I am most interested in the topic of Digital Forensics and filesystem analysis. In my free time I like to create art, listen to music, and hang out with my friends.

Plan for the Future: My goal is to work for a Federal Executive agency pursuing a career in a cybersecurity-related field. 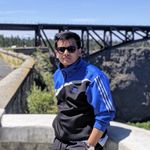 Hobbies/Interests: I like everything related to AI and Machine Learning. In leisure, I also like to play soccer and go fishing.

Plan for the Future: My goal is work as a Machine Learning Engineer.