Cooling towers cool water by evaporation. Most of this water is cooled and collected within the basin of the tower. However, some of the water is evaporated and lost out from the top of the tower. The goal of the project is to create and implement a real time data acquisition system in a cooling tower at the University of Idaho, Moscow Campus. The system consists of a variety of sensors and a master device. The sensors are collecting data on air temperature, humidity, water flow rate and water accumulation. This data will provide insight into how much water is being evaporated and lost out of the top of the tower.

In the near future, a system that will collect this evaporating water will be implemented. To validate the success of such a system, one needs to know how much water is being lost. Otherwise, it is difficult to know how efficient this water collection system is performing. It is necessary for one to know all inputs and outputs of the tower for this project to be successful.

Water scarcity is becoming a serious issue. According to the UN, by 2025 1.8 billion people will be exposed to absolute water scarcity, and two thirds of the world will be living under water-stressed conditions[2]. This makes it a top priority to conserve and save water in every application. Implementing a system that allows the user to view how much water a cooling tower is losing and how efficient they are at diminishing water loss is a crucial step towards water conservation. 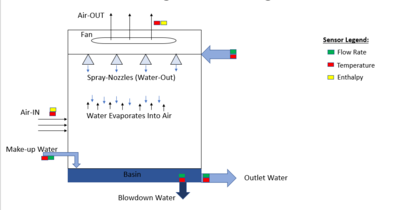 The overall design should be simple and easy to duplicate. It should also be easy to understand provided accurate documentation. The system should lend itself to upgrades/updates as new/better hardware is chosen to be installed. The system should also lend itself to expansion, specifically in this case, the ability to be expanded into a system that allows for automated controls or manual controls.

As the electrical engineer, I learned more about system design, installation, programming, project management, communication between group members, and external influences to the project. I also learned to think on my feet as curveballs happened during the project. One of the best parts of it was learning how a cooling tower worked, including some basic thermodynamics, which I had not been able to learn about in classes. I learned a lot about SEL devices, as well as how sensors work for the project, and industrial practices concerning SCADA and DAQ systems. The best part was when I was able to see the project come to reality, and successfully be able to see the data required for the project. I had the opportunity to improve my presenting skills, both to technical backgrounds as well as public. I continue to improve on inter-disciplinary work skills. Overall, this was good experience of a project I could see the end to, and I was able to improve skills I already had in place from other experiences in industry.

As the sole mechanical engineering major, I was learning the thermodynamic operating principals of a cooling tower. This first entailed learning how cooling towers function and their purpose. There is a wide range of applications for cooling towers, but they are commonly split into two categories, HVAC and industrial. The application at the University of Idaho is for HVAC as it rejects unwanted heat from the chiller. There are also two main categories for the types of cooling towers. These are natural draft or mechanical draft. The University of Idaho’s cooling tower is a mechanical draft with the sub-category of forced draft. Meaning, there is a fan at the air inlet of the cooling tower, which forces the air into the tower. Besides learning about the various operating principals of cooling towers, I also learned about how to apply the general mass balance and energy balance equations to cooling towers. This allowed us to determine which metrics were needed to be measured with our sensor system. The final learning aspect of this project for me was in sensor selection. I had to go through many vendor data sheets trying to find the sensors which would both measure the correct metrics and be accurate enough for our client.

Our final design consisted of three main parts; sensors, a master device, and data storage. For our master device we chose to use the SEL AXION. This device is a real-time automation controller. The AXION reads data from the sensors at an interval of once per fifteen minutes. These data points are stored in a time-aligned CSV sheet. Once per day, this CSV file is uploaded to a university server. The end user may retrieve this data from either the server or the AXION device itself.

The AXION device is collecting data at the specified time rate and is storing these data points in a CSV sheet. We are now able to view and manipulate data in real time from the cooling tower.