The goal of the project is to design and construct a working prototype for an electrified security door.

Design a system that causes high voltage arcs to pass across a doorway in a manner to discourage people from entering.

Currently, security systems are pretty lackluster when it comes to intimidating intruders. The average system consists of locks, cameras, and motion sensors. The goal of Security Shock Door is to construct a new security system utilizing a NASA built Tesla Coil arrangement to produce visible lightning bolts across a doorway; providing the alternative of a passive defense by having a strong intimidating presence. We will be building a demonstration unit that shows our application of intimidation.

- Agreement between team members for acceptable protocol and etiquette

- Breakdown of the intended funds for the project

- Documentation of the multi-functional requirements of the system

- Intended plan for time management of the project

- Formal "progress update" of the design for the project

The final design of this project should meet the following qualifications/Specifications:

Although Nico had selected gold plated copper with a nickel undercoating as the best and most conductive material for our nodes, we are changing the design of our nodes so that the electrical arcs will have less interference with each other. Due to time constraints, we will now be manufacturing the nodes ourselves so they will most likely be made out of aluminum instead of gold-plated copper for demonstration purposes.

Justin has been working on modeling the door frame and designing the source and ground nodes as to provide an accurate representation of our intended working space, and to manufacture our custom arcing nodes.

Due to COVID the ability to determine the sizing of our work space is highly valuable and something that will continue to be needed as our lab space is closed to in person activity. All of the surfaces of the doorframe have been constructed even down to the door hinges in order to provide as accurate representation as possible.

After much deliberation between our mentors, Ian Glasglow and Philip Hagen, and between Connor and Justin we determined that a sharp/pointed source node and a smooth hemispherical grounding node would be best. This allows for the current to build up and be focused through the point of the source node and then be released when the arc is generated in between the two nodes, See Feko Simulation "Cone to Cone" and "Hemisphere Receiver" respectively for images.

Nico has been working on managing our current over heating dilemma with the current Tesla Coil design. After a lot of research on heat transfer and heat management methods, Nico has come to the conclusion that liquid CPU cooling would be the best method for keeping our transistors from overheating, however, proper heatsinks are sufficient and are much more cost effective. After performing multiple tests on various types of heatsinks, Nico has selected the most efficient heatsinks to keep our transistors from overheating.

Andrea has been working on the behavioral simulations of the Tesla Coil circuit that was acquired by our team. She mapped the components from the physical circuit board into LTspice and was able to verify the input and output voltage of the system. Because of the complexity of the circuit, it took 12+ hours to run a full simulation at full scale however, a change in the simulation command was made to shorten the simulation run time. This provided quicker results, but the results were scaled. Having researched and confirmed that the output voltage is within range for the design of the secondary load, that value may be simulated further to demonstrate that our electric arc will meet our objective.

Connor has been working on simulations of the behavior of the Tesla Coil. All the work so far in Altair FEKO is strictly to gather behavioral data which means nominal values are being normalized and converted to decibels. Along with that the general setup for the tesla coil model is very simple. It has a turns ratio of 1:100 and a source of 120V attached to the primary coil. This will be changed in future testing when reverse engineering the physical tesla coil is completed and modeled in other software. The behavior that has been tested is to see how electric flux density is distributed on different emitter shapes, how intense the electric field is in between the emitter and receiver, and how the electric flux density is distributed on the receiver. Results so far show expected behavior.

For this project the desire to put the control of the power to the system behind a form of authentication platform was very apparent. This showed how the system could be integrated into a system that was already in place and provided a method for use to safely demonstrate the system during expo. In order to do this Justin worked in conjunction with Connor and Phillip to construct a python based GUI that would be displayed and controlled on a Raspberry pi powered touch screen. The code for this terminal was fairly simplistic however the actual final touches were very finicky and was when Connor and Phillip’s assistance was required. 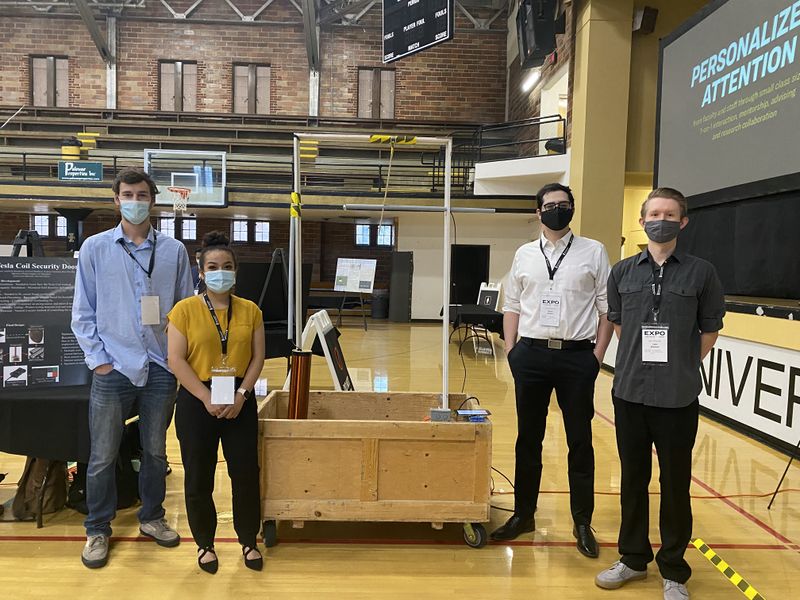