As large companies such as Amazon output enormous volumes of items, distribution center inefficiencies become costly. Distribution centers are complex systems designed to maximize flow of inventory. To do so, products must be moved fast without incurring damage. Many warehouses use human operated forklifts to transfer products, presenting high hourly cost* and greater risks of damage and liability. As a result, major challenges arise when designing for maximum speed and minimal cost. An increasingly common method to overcome these challenges is to decrease human presence in warehouses. Our goal is to design an automated system to autonomously retrieve/place item bins. This design will move products faster with minimal risk of damage while simultaneously decreasing hourly costs. In addition, this system will fit in both tighter and stacked shelving configurations, maximizing grid efficiency.

Bastian Solutions has developed a robotic shuttle capable of handling totes autonomously. This shuttle is able to translate freely throughout the distribution center but designed to travel on powered rails when picking/replacing a tote in the shelving grid. The powered rails ensure both proper mechanical alignment and battery charging. To handle totes with repeatability, Bastian Solutions developed an extractor mechanism mounted in the center of the shuttle that grabs totes from their sides. Two pivoting solid members rotate towards the tote and press on the sides to secure contact. A chain drive then pulls the tote onto the extractor. The extractor is mounted on a scissor lift, allowing the handling of totes above or below the shuttle body. 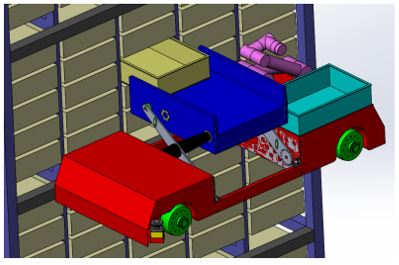 Bastian Solutions tasked the University of Idaho Engineering Capstone Team Totetakers with improving on the current design by solving the two main problems of shuttle length and wasted grid space. This is to be done by creating a folding extractor that can be mounted to the back of the shuttle similar to what can be seen in the figure below. 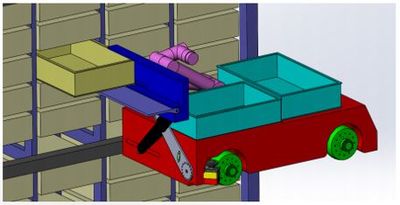 This diagram outlines the general process of extracting and replacing a tote. Before engaging with a tote, the controller must bring the system to a mechanical state such that components are both aligned properly and ready for an extraction. The next step is to engage the tote by using a mechanism to attach to it. Once engaged, the system can extract the tote off the shelf onto the extractor itself. While on the extractor, the shuttle may interact with the tote by placing or removing items, and/or the shuttle may translate about the distribution center with the tote. When the shuttle is ready to insert the tote on a shelf, the reverse extraction process is executed. When the tote is fully off the extractor, the system retracts into the rest state. The rest state is such that the width of the system is within 7”.

This section details key components and the functionality of the system is also discussed in depth. A render of the system is shown below. To remain in the allotted budget, the extractor was built out of prototyping materials for proof of concept. It consists of a box base and an extractor tray connected to a hinge on the top, rear edge of the box. This allows the entire extractor tray to tilt up to the rest state, and down when the shuttle is ready to grab a tote. A pinion and driven gear system, mounted to the box, is used to raise and lower the extractor tray. 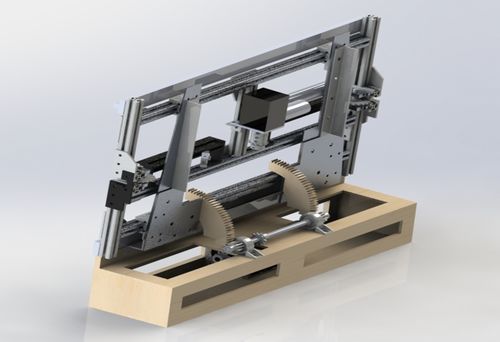 The mechanism used to attach to and pull totes is a chain driven system in the center of the extractor tray along with a linear Actuator. This method is like a design previously explored by Bastian Solutions. Attached to the chain is a small stub, formally denoted as the “whale tail”, due to its resemblance to the large sea mammal’s propulsion actuator tail. The whale tail connects to a specially designed enclosure on the front face of a tote that allows for both pushing and pulling. A photo of the whale tail attached to the chain is can be seen below. 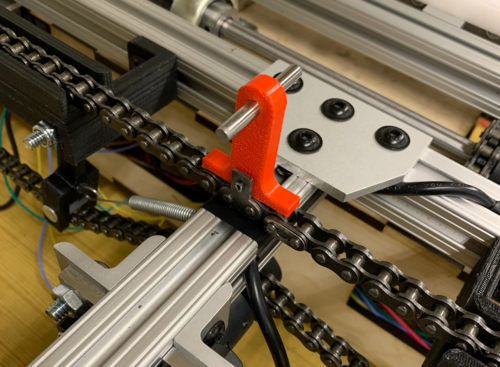 The chain drive mechanism is part of a subassembly of the extractor tray, capable of sliding back and forth. This subassembly slides towards the tote using a linear actuator, thus bringing the whale tail directly under the connecting enclosure of the tote. Retracting the chain moves the whale tail back up into a vertical position, automatically hooking itself into the connecting enclosure. The chain can then pull the tote onto the extractor fully, and slide the subassembly back to the center starting position. To offload a tote from the extractor, the exact reverse process is executed. Note that while the extractor may pick totes from either side, this system can only offload a tote from the same side it picked a respective tote from. After extracting a tote, the shuttle may carry it around the distribution center. The whale tail prevents the tote from sliding sideways, but cannot prevent it from sliding off the end of the extractor. A Delrin notched rectangular track is placed on the end of the extractor to prevent the tote from sliding off. A matching notched slit is located on the base of the tote. This track also assures tote alignment is maintained. This can be seen in the render below. 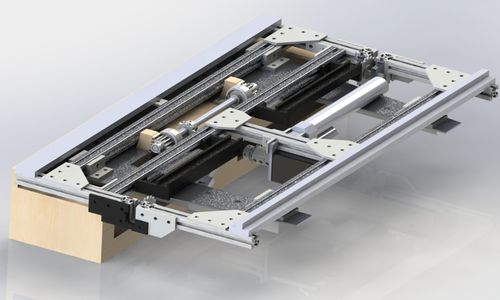 The tote was redesigned to interface with the extractor. A successful tote for Bastian's application is on capable of consistently connecting securely to the extractor. The totes will be mass produced, and thus only plastic, easily injection molded features were allowed. Our design adds an enclosure feature on the front face of the tote. This feature is designed to securely connect to the whale tail allowing both push and pull operation. The opening is large and the inner walls sloped to allow the whale tail to rotate up into it. In addition, a rectangular notch across the base of the tote removes only a small amount of space within the storage space of the tote. This notch fits over a matching Delrin track on the extractor, preventing the tote from sliding off the tray.

The system is controlled by an Arduino MEGA 2560, a board strictly intended for prototyping. An LED lets the user know what state the extractor is in. Green indicates the center state where any command is possible, a blue LED indicates a halfway state where the only available commands will return it to center. A button pad matrix is used to send user commands to the system. An induction field sensor is used to provide feedback to allow the controller to know whether the tray is fully folded up or down. To calibrate the whale tail to center position, an infrared object avoidance sensor is implemented on the side of the tray. The control flow diagram shows the states of the system and which commands are available at each state. A control flow diagram for the state machine driven system can be seen below. 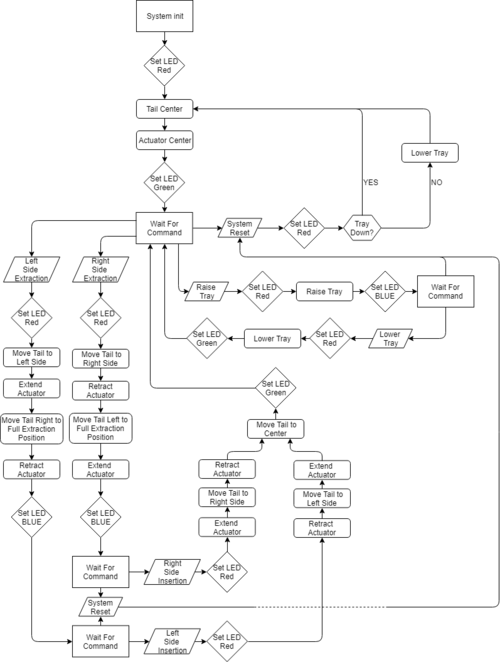