Design a remote visualization system needed in a hot-cell with a high radiation dose level to enable real time remote monitoring of microscopy equipment. The equipment inside is only accessible via robotic manipulators operated outside of the hot-cell and thus the system must be design to this parameter.

Idaho National Laboratories has a hot cell like environment known as a Met Box. This Met Box has only one clear view into it, through the front window. Operators work microscopes and hardness tester from either side of the box without any view of their machinery. The operators need to have a way to determine the motions of their machinery in the Met Box without having to move from their stations.

The Idaho National Laboratory is a government facility and is the nation’s leading center for nuclear energy research and development This research is extremely important and valuable for a variety of people, institutions, and for the advancement in the nuclear field.

Our project sponsored by the Material Fuels Complex facility at the INL is to create a remote visualization system needed in a hot cell to enable real-time remote monitoring of several microscopes and a microhardness tester. The current visualialization system, is composed of two parts. The first being a window in which the operator setting the samples on the microscopes and microhardness tester. The operator does not have a view over the top of the two devices to view the outputs. The second part of the current system, is a workstation located around the corner of the hot cell from the window where readouts from the microscopes and microhardness tester are displayed. This current system lends itself to miscommunication when testing.

Our system will enable both the operator and the workstation user to have direct line of sight over the top of the microscopes and microhardness tester. These improvements will allow the MFC facility to more efficiently and properly characterize materials used everyday in the nuclear industry, which will inturn advance research and development overall.

The design of the met box visualization system must meet the following requirements:

When (I) divided by (Io) is equal to 0.5, x will be the half value layer. An HVL calculator was created to determine the HVL of materials from the specific Gamma radiation found within the Met Box.

For the basic outer shielding three separate materials were considered: stainless steel, lead and tungsten. There half value layers and prices are shown below.

For the lens a material known as Clear View Radiation Shielding will be in use. The material itself was recommended by Idaho National Laboratories and is made by the company radium. It is and extremely light, non-toxic polycarbonate material that contains a liquid solution inside. The the density of the overall material is 2.23 g/cc and the HVL is approximately 1.5in. The material typically comes in a housing of 816 Stainless Steel, but can be given an additional perimeter of polycarbonate to keep it contained.

Finally there is a type of radiation produced by the reaction of gamma rays and the outer shielding metals called bremsstrahlung radiation. This requires that metal shielding used in the product to be accompanied with a secondary layer of a less dense material, namely plastic. One such material that could be used is a material known as Densetec. It is a high density polyethylene that is 5% boron that is easy to machine. This material would compose an inner layer for the shielding that the visualization system requires. [3]

The criteria I have been using to look for cameras comes from our requirements include a camera that can zoom, and ideally has the capability to adjust the angle to view. All of the cameras have the ability to zoom, however, some do no have the capability to adjust the angle. We could potentially correct this by manually adjusting the angle with the manipulator, or include and additional system that does this independently. I have includes links to the different cameras below.

Three design concepts were initially developed for the project.

I learned that the max height for a Octopus tripod sold today is around 14 inches. Our design needs to have a height of at least 24 inches to view the microscope or hardness tester. So this design will not work.

There are a wide range of electromagnets that could handle the load of the system. Information from INL proved that the sides of cell were magnet. But the system’s electronics would likely fail due to radiation, so this concept is not sufficient.

For the design review we presented three different designs: 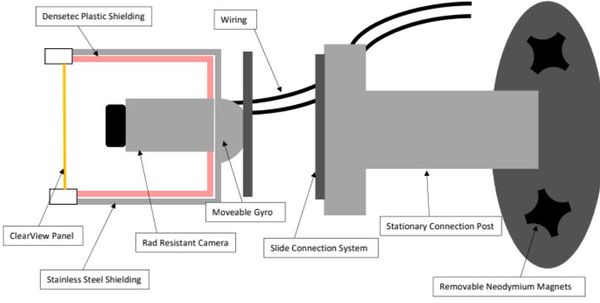 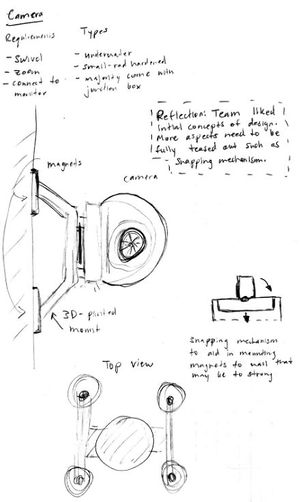 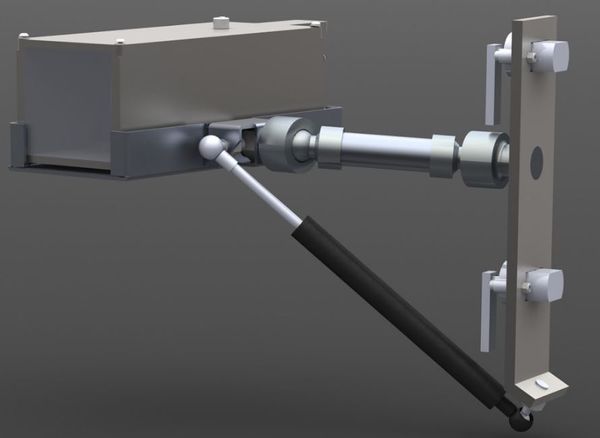 The arm piece includes two specific ball joints. The ball joints are both of British G 1/2" threads and have a female and male side to them. In the design, both female sides of the ball joints will be screwed into a brass bar of the same threads. The male end closer to the post will simply be screwed into a tapped region on the given post. The ball joint closer to the camera will be put into a converter, which itself converts the unconventional G1/2" threads to the universal 1/2" threads. From the converter a piece will be included that allows for the screw included with the basket.

The post piece is made out of a layer of 1/4" stainless steel, that will be manufactured from a bigger sheet to make the shielding as well. On this post piece will be two magnets, inserted through cut holes and then screwed into place. The magnets have the ability to be switched off using a switch, and are neodymium magnets that are capable of withstanding a load of 50lbs. On top of the magnet pieces is a little lever meant to improve usability of the magnets themselves. The section meant for connecting to the arm piece will be tapped and threaded for placement. The end of the post will be bent into the wall in order to keep stability of the post. Finally at the bottom a hydraulic strut will be attached that is used to help carry the load of the camera.

The camera used is a Marshall CV350-10XB that weighs 375g. The camera will wrapped with low density aluminum foil in order to prevent bremsstrahlung radiation from damaging the camera. Surrounding the camera is 6 1/4" stainless steel plates that are meant to reduce incoming radiation by 20% and are bolted together. In front of the camera there is a 2.5" * 2.5" * 2.5" block of ClearView radiation shielding. The shielding is meant to reduce incoming radiation by 80%, which is integral to protect the optical electronic pieces of the camera. This ClearView piece will press-fitted into the shielding so that it remains stationary. The camera has external wiring of USB2 for regular use and HDMI or 3G/HD-SD for the zoom ability. The camera itself has the ability to gain 10X optical zoom if necessary. The back electronics will be wrapped with aluminum foil to an extent where they remain safe enough from radiation will facing away from it most of the time. A tab is included on the top shielding piece to give easy maneuverability for manipulators. Total weight of all components is 6.61 lbs.

The Camera/Shielding piece is to be carried by a 14 gauge 5052 Aluminum baskets. This allows the camera/shielding piece to be completely removed from the rest of the system, as it is no loner attached by screw or latch it is simply placed. Aluminum basket will be tapped to allow for both the arm piece and the hydraulic strut to be screwed in. Tabs are created to allow for this tapping process. Also an additional tab is added on the outer side of the system to allow the manipulators to more easily move the camera. 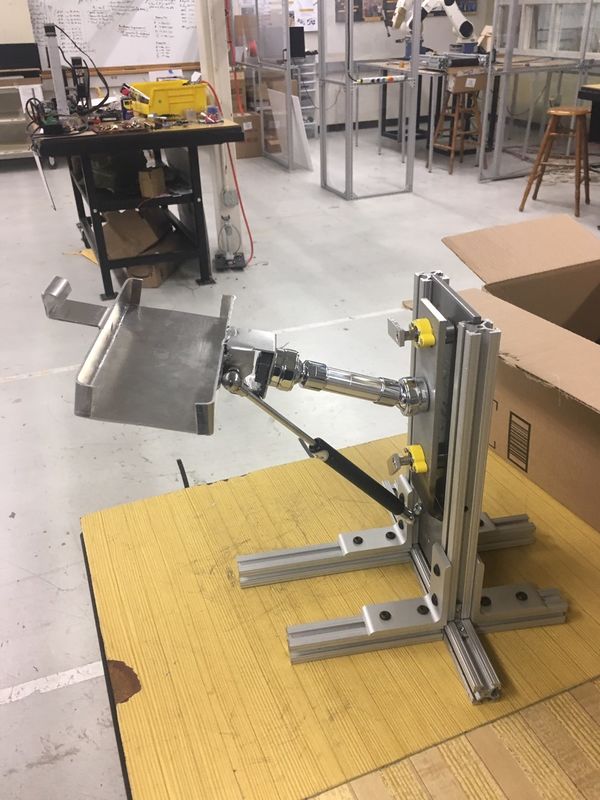 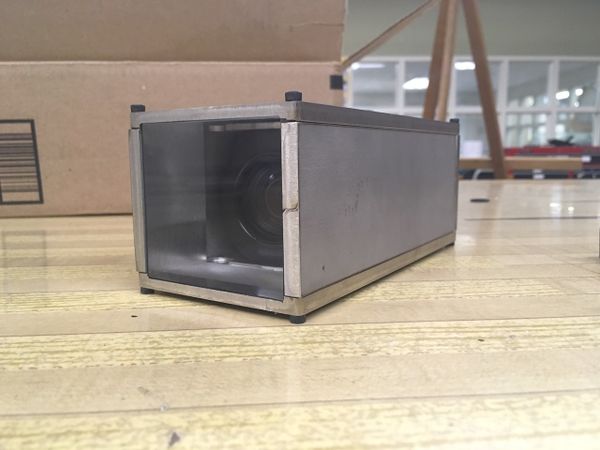 The system was created with acrylic stand-in for the ClearView Panel.

Testing did occur to prove the validation of the Met Box System. Electronic testing was provided to find how the camera could operate. The provided camera comes with its own software and is able to be used on any monitor through an HDMI port. with a separate or wired controller one can also operate the zoom function of the camera. Weight testing proved to be the most challenging. Initial designs only included the arm piece with the ball joints. This proved detrimental as the arm piece could not even handle the moment of its own weight. As such the hydraulic strut was included. Other testing showed that the implementation of the hydraulic strut could have been better. While the system does hold itself, the camera leans frontward. This is due to the hydraulic strut being attached on a tab to the side of the basket rather than under the basket where the center of gravity would be. Magnets also do not seem to hold efficiently enough and are suspect to sliding. The 6o lb strength of the magnets is simply not enough for the moment created by the system. Using one or two more magnets might suffice for the system.