Demonstrate the feasibility of various solar panel options available for installation on campus.

The University of Idaho is currently preparing to expand on campus next to the Kibbie Dome. The building that will be erected is the Idaho Central Credit Union Arena, which will occupy the current gravel lot adjacent to the enclosed football field on the northern side. While the project will begin groundbreaking following its secured funding for construction, time remains where additions may be suggested to those directing the project. The senior design team would like to investigate the solar panel options available for installation on campus. The team reviewed unique solar panel features to combine into a more versatile prototype. The final product will generate power at increased efficiencies compared to its counterparts and house an original LED display capable of representing a range of possible demonstrations.

Semiconductor with a pn junction is exposed to light. The photons of the light can energize the electrons in the valence band. If the electron gains enough energy to cross the band gap, then it creates an electron hole pair, with the electron going to the conduction band. There is an electric field being created from the electrons and holes combining, which the free electrons increase the electric field, increasing the voltage and creates a current to produce power. The Antireflection coating is so photons aren’t reflected off the semiconductor’s surface. The front contacts are to allow current to flow, because shocker semiconductors aren’t the best conductors. The glass is there to protect the cell.

As temperature increases, the power decreases. An increase in temperature decreases the band gap of the semiconductor, or another way to think of it is the electrons gain more energy. For solar cells, the open circuit voltage is affected most by the temperature increase. There’s a lot of device physics and equations behind the concepts. 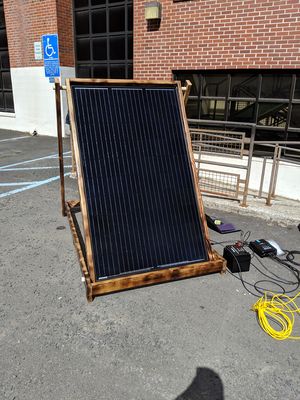 The final design of the solar panel with the adjustable frame to house the LED display. The team designed two rectangular frames, one for the base support and the other for supporting the frame when adjusted at different angles. These frames worked in tandem with the supporting sidebar which had holes for the dowels used to lock the frame into a desired configuration. The LED display was created with an acrylic sheet that was reduced to the necessary size in order to fit on top of the inner frame while still allowing for angle adjustments to be made. The LEDs were then mounted onto the acrylic sheet through adhesive, with connections between each strip of LEDs being soldered in a series resulting in a final result that allowed for manipulation through one overall access point. 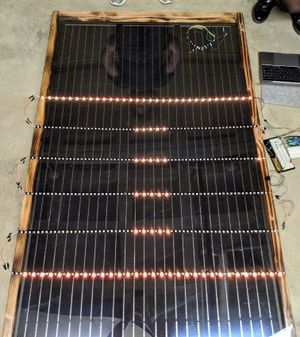 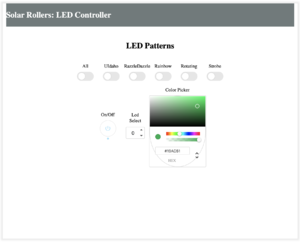 For the control of the LEDs, two different methods were used along with a different microcontroller for each. The first method consisted of an Arduino uno programmed in C with the Arduino IDE. This was used to create the I logo shown above. The second method used the Blinkstick (ATtiny85) programmed in python with the dash framework to create a GUI. The design of the GUI was still a work in progress and requires further development for full operation. 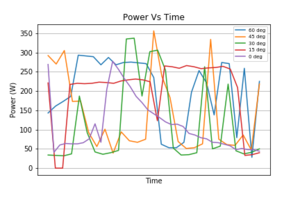 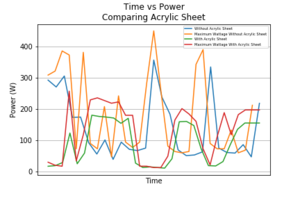 Initial data captures demonstrating the panels potency at different angles and weather conditions. Follow-up data captures showing trends from a pyranometer’s theoretical generation versus actual generation that occur before and after the display was added. The power generation created by the system is able to support the LED display even when an acrylic sheet was placed over the panel. The system is capable of being placed as a permanent unit within the UofI electrical grid.

From each respective panel option, the Annual Generation and ROI were found. While through the differences in cost to that of generation alone, the ROI values reflect the various periods required to completely pay off each possible installation. Of the three, the hybrid model is shown to be the most cost effective.