The goal of the project is to create a doorway security system powered by a Tesla coil that will shock unwanted intruders and prevent their entry.

Provide an alternate safety device for preventing access to a room or house, using a tesla coil design. This design should electrically shock intruders with the same voltage as a standard taser, with the intent to attend intruders but not injure. This shock should occur four times a second and be discreetly positioned so the intruder can not easily spot it. We also need to be able to direct our electrical arch in a specific direction.

What better way to get someone's attention than a sudden 50,000 volt shock? This contraption is designed to keep unwanted intruders from entering through a doorway for whatever reason. Using a Tesla coil, the intruder will be shocked upon reaching for the door handle.

This system could be used for any doorway. With an aim to steer away intruders without serious injury, safety features are implemented to insure not only the intruder(s) but also the owner(s) of the system are at low risk of severe injury.

With both mechanical and electrical design techniques, the Tesla coil security system is designed to optimize effectiveness as well as convenience using an appropriate Tesla coil, touchscreen, material selection and geometry among other design considerations.

-An outline of the roles for each member of the group

-Outlined schedule of our project including design review dates and deadlines

From a mechanical perspective, the geometry and material selection of the door, door handle, and frame is crucial to optimize the electrical arch protrusion.

A wooden door and door frame are used because of the fact that wood is practically non-conductive. This is important so the electricity produced from the Tesla coil does not arch to the door or frame at any point along the electrical pathway. The type of wood is not important and can be selected to the discretion of the system owner.

Rather than using a traditional latch assembly to open and close the door, magnets are implemented on the door edge as well as the corresponding door frame positions to hold the door in place while it is closed. A dead bolt may also be implemented for a more secure lock when it is wanted or needed.

The door handle a more complicated design. Using a 3D printer, the handle is made with ABS plastic. A handle cap made of copper is then secured onto the tip of the plastic handle for conduction of the electric arch. Small conductors made with electroplated silver are implemented. This will help increase the surface area of protruding shock from the door handle.

The electrical design is most important for the safety of the system as well as the effectiveness. The Tesla coil must be able to be armed and disarmed as well as provide a shock sufficient enough to scare away the intruder without seriously harming them.

A touchscreen located outside of the secured room will be available for arming and disarming the system. By entering a PIN, the user will be able to choose the state of activity the system is in. This is crucial in the fact that it will allow people to walk in the door without being shocked.

The Tesla coil is perhaps the most important piece of the system. The geometry of the coil itself as well as material selection of wiring and infrastructure play a role in the overall performance and output of the system. The desired output voltage is dependent on the height, number of wire turns, resistivity of air, and other things. An input of 350kV is required for this particular system to achieve an output voltage of around 20kV. This means that the intruder will be shocked with approximately 20,000 volts--around the same as a typical taser. 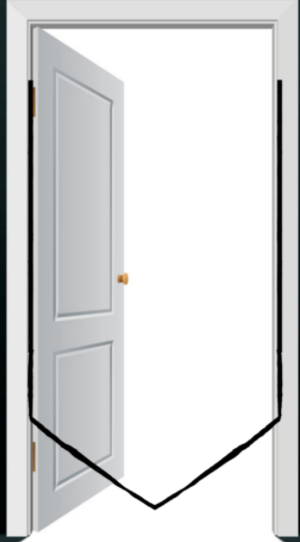 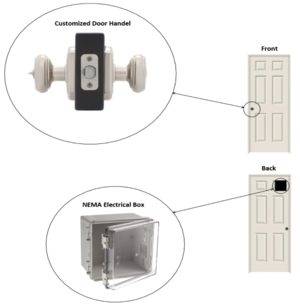 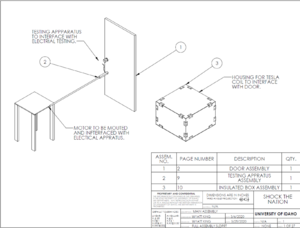 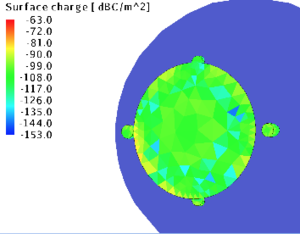