Code generation is done in ReplicatorG software. ReplicatorG converts the STL file into a build plan for Makerbot based on the selected settings. Various changes to the parts orientation, size, and build quality can be adjusted in ReplicatorG.

For a good print a part must be placed in ReplicatorG for code generation. The part must be oriented so the side with the most surface area is on the plate. Other special conditions exist and are mentioned in Part Orientation. ReplicatorG will hollow out the part, build internal support structures, and slice the part into layers based on the "Generate Gcode" . After Gcode is generated the part can be exported to the SD card to be built by MakerBot.

The file name cannot exceed more than 26 characters (not including the file extension). All valid file name characters should be accepted, but may be the problem if the file does not show up on Makerbot when the file is transferred. 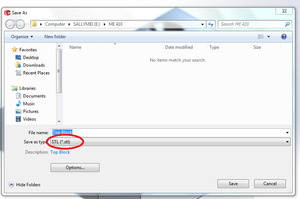 Save as STL in Solidworks

STL is a generic 3D file type and can be produced by most 3D based programs. Instead of having the steps to create the part, a stl file contains only the geometric surface dimensions.

Because a stl file contains only the geometric surface dimensions it is important to also save the part as the typical SLDPRT. This enables a user to go back to the Solidworks file and make changes to the parts design if required.

Code generation is done in ReplicatorG. It can be downloaded here. Version 0040 is currently recommended. It will also require Python v2.7.5 to run properly. It is available here. ReplicatorG and Python will run on Windows, Mac, and Linux.

Once ReplicatorG is running, parts can be loaded from the file menu. Only STL files are usable by ReplicatorG.

Parts in RelpicatorG must be placed flat on the platform. The side with maximum surface area should be facing the platform. Moving, rotating, and scale are done to achieve this.

Opened parts can be moved by using the “Move” button on the left. This allows for the part to be moved by use of the buttons on the right side or by clicking and moving the cursor. It is best practice to place the part in the center of base plate (or as close to the center as possible). The “Center” button will typically center the part.

If the part is oriented at an angle, lay flat can be selected to place the part securely on the table. Lay flat will automatically lay the part down on the table using the nearest flat surface.

Opened parts can be scaled by using the “Scale” button on the left. Parts will scale relative to current size. If it has been scaled once, the second scale will be based of the new scaled part.

Supports are plastic pieces placed strategically throughout parts that have overhangs and arches to prevent the plastic from drooping when plastic layers are being placed. Only supports if absolutely necessary because it increases build time and leaves marks where the supports were attached.

Supports can be added by ticking "Use Raft/Support" and selecting a value in the "Use support material" dropdown.

A raft lays down a thin pattern of plastic for the part to be built on. Rafts are used to make removing the part from plate easier, to prevent warping, and to increase parts sticking together. Rafts should not be used if part is circular because the part will fail. Removing rafts can be difficult so they should only be used if necessary.

This changes the percentage of internal fill in the part. The standard 10% will suffice for most parts and is fairly strong. If extra strength is needed this can be raised. Do not raise this too high - prints will begin to take much longer, you will use much more material (which costs money), and there is a chance that you could cause the nozzle to jam.

This setting lets you change the number of outer shells that the printer creates before starting infill. Changing the number of shells is necessary when a thicker outer wall is needed for Post Print Processing. The default value of 1 fine for most builds. Each shell will be as thick as the filament is, so consider this when deciding how many shells you want for your part.

Set feedrate to 70. This will always be the same.

Set travel feedrate to 150. This will always be the same

Set print temperature to 230°C. This will always be the same.